Last year around this time, I launched the 1st Annual Coffeeneuring Challenge. The goal? Ride your bike to seven different coffee shops over six consecutive weekends, and adhere to 15 rules in the process. Several riders began the challenge, and 12 people officially earned the title of coffeeneur. 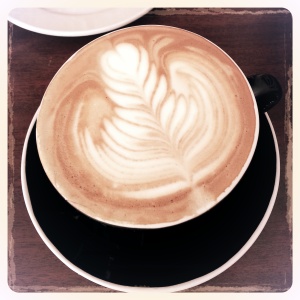 After the challenge ended, one person decided to continue and mapped out his quest to visit at least one different coffee shop each weekend for a full year.

It will never happen, I thought skeptically. First of all, what kind of coffeeneur has that kind of determination and love for the bean? Second, what town has that many coffee shops?

I now have my answer. Tangobiker is the coffeeneur with that kind of determination, and Portland, Oregon, is the town with more coffee shops than I can fathom.

Until I saw the information Tangobiker sent me about coffee shops in Portland, I did not realize just how many places there are to get coffee in that city. It’s quite remarkable!

Throughout the year, Tangobiker pedaled and sipped diligently toward his coffeeneur goals. I followed his progress through Instagram, and frequently caught sight of coffee drinks and bike rides in his photostream.

When week 52 of Tangobiker’s Coffeeneuring Challenge ended, he had ridden to a total of 63 different coffee establishments.

I thought it was an impossible achievement, but oh how wrong I was. Tangobiker sent me the control card to prove it.

This control card/spreadsheet shows all the locales Tangobiker patronized over the last year and when he went there.

All trips occurred on Saturdays and Sundays, wIth the exceptIon of one trip made on Labor Day. The only place Tangobiker visited more than once was the espresso bar at River City Bicycles, which he visited early on in the coffeeneuring challenge and again in May.

Over the course of the last 52 weeks, Tangobiker not only perfected the coffee with bike shot, he also visited 63 coffee locations.

The spreadsheet below shows the 63 distinct places where Tangobiker coffeeneured.

As you can see, the majority of Tangobiker’s coffeeneuring took place around Portland. However, he did extend his radius a couple of times to coffeeneur at Zoka Coffee Roasters in Seattle, Washington, and at Caffe Artigiano in Vancouver, British Columbia… in Canada! International Coffeeneuring!

A cup of joe by bike at 63 places in 52 weeks. Now that’s Super Coffeeneuring.

Needless to say, I’m quite impressed and I wanted to give Tangobiker a little something in recognition of his coffeeneuring achievement. To that end, I am sending Tangobiker a customized espresso spoon that has been hand-stamped with the title “Coffeeneur.”

You deserve it, Tangobiker! It’s a small thIng, but this way you have more than your spectacular spreadsheet to remind you of the good times spent coffeeneuring this past year. You are truly a Super Coffeeneur.

By the way, there will be a 2nd Annual Coffeeneuring Challenge, so stay tuned for details!