Felkerino said that today is when the mountains embraced us. I said it was a day of bike tour magic. 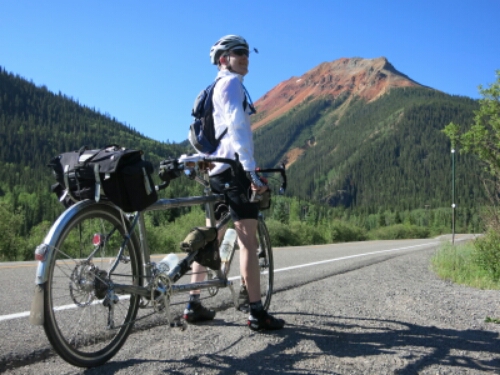 Part of the reason for that, of course, was the beautiful climbing on the Million Dollar Highway for the first 38 miles. We ascended from Ouray at 7,800 feet to over 10,000 feet and crossed three passes in the first half of our ride: Red Mountain; Molas; and Coal Bank.

The other reason we felt so inspired by our day was the people we had the chance to meet. We were held up at the top of Red Mountain Pass because of road work (blasting!) and chatted with several people touring the area (in their cars, but I guess it’s okay this time).

We flew into Silverton, where the town was preparing for the Hardrock 100, which starts tomorrow. It was bustling!
We had excellent espresso at Mobius. We talked to a couple of the ultrarunners and met a couple from California who were out mountain biking the area. We exchanged bike stories and Felkerino even test rode one of their bikes.

More steady climbing over Molas and Coal Bank Passes until mile 38, when we began our big drop into Durango. The road was mostly peaceful going up, and all drivers gave us plenty of room when passing.

In town, we stopped at Durango Cyclery (a shop full of bike treasure) and ended up going to dinner with some people there. That’s bike tour magic!

I’m tired so I’m not doing the best job of explaining the magic of this day. Weather was good and our bodies seem to be settling into longer climbing efforts. That could also be the payoff from our rest day, too. The grade of the highway was also not as steep as Felkerino and I thought it would be.

The vistas were intense, and I wasn’t even freaked out by the sheer dropoffs while leaving Ouray. Progress!

From beginning to end, I felt welcome. Lots of people talked with us about our tour, and we had so much fun chatting about bikes, routes, and touring. 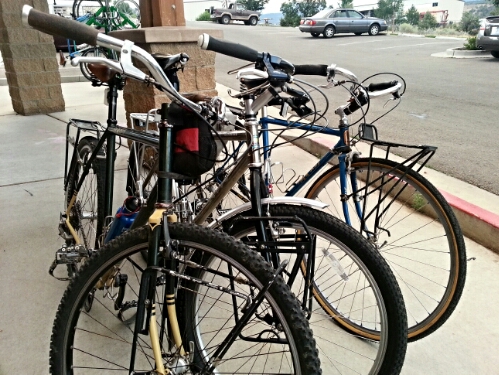 I don’t know why this day was so interactive. Maybe it’s the vibe of this area or maybe we’re coming down with the blabs, I’m not sure. It was an awesome day, and I’m attributing it all to bike tour magic.