Thanks Felkerino, MG, Jose, Steve and Kip for the ride. I sure enjoyed all those gravel roads and the 20 percent hills and the hail and snow squalls and the crazy wind situation and all the tree debris littering the roads and trails the whole night and the cold and the moaning and drama and the camaraderie.
–Jerry

After my last flèche experience in 2013, I didn’t imagine doing another one. I was bored with loop courses, and the sleep deprivation brought about by 24 hours of riding wasn’t worth it. The point-to-points I’d done were almost all too logistically complicated on the front end. Been there, done that.

But when our friend Jerry suggested we do a point-to-point route starting in Connellsville – a Pennsylvania town located along the Great Allegheny Passage (GAP), next to an Amtrak station – and ride our way back home, the flèche regained its appeal. 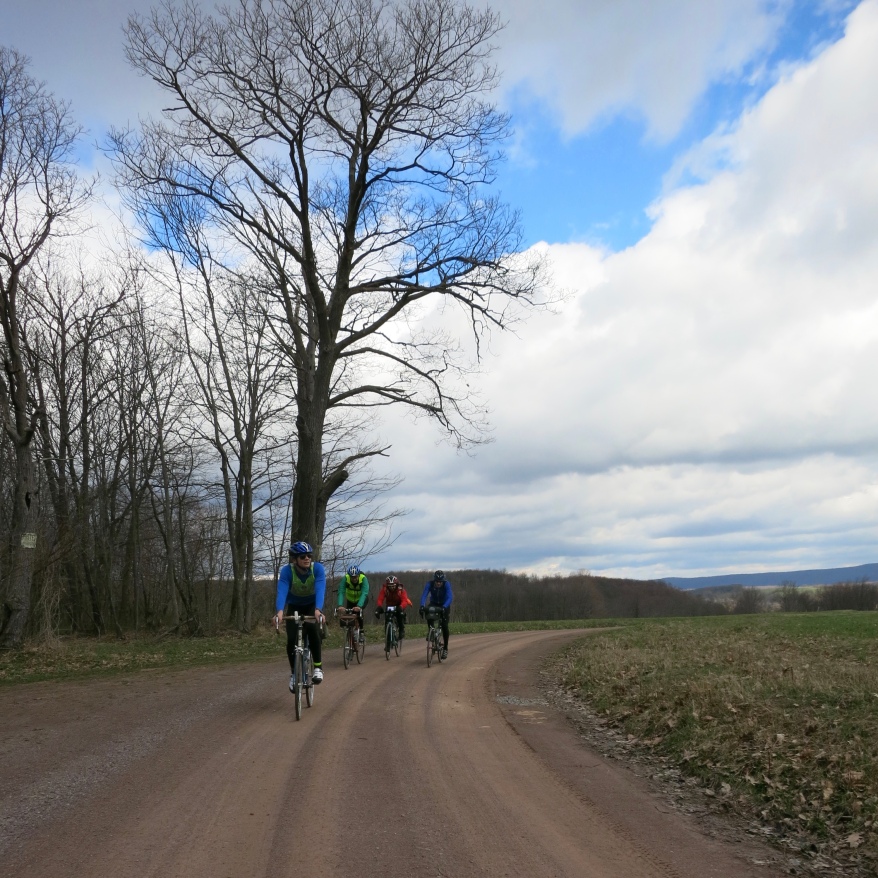 Felkerino and I added an extra day to this plan by securing a one-way van rental to Pittsburgh (since tandems are not yet allowed on the train). After dropping off the van, we rode our way 60-some miles out of town via the GAP to meet our friends in Connellsville and ride the next day. We spent a nice Friday tooling down the quiet trail, checking out the Youghiogheny River views.

A flèche where howling winds, snow squalls, and sub-freezing temperatures dominate the evening hours is an unlikely candidate for favorite ride status, but this flèche definitely fits on my favorites list.

While it was happening, I informed Jerry that I would be sending along a list of grievances about our route. Too hilly for a flèche. Climbs too steep. All the gravel! 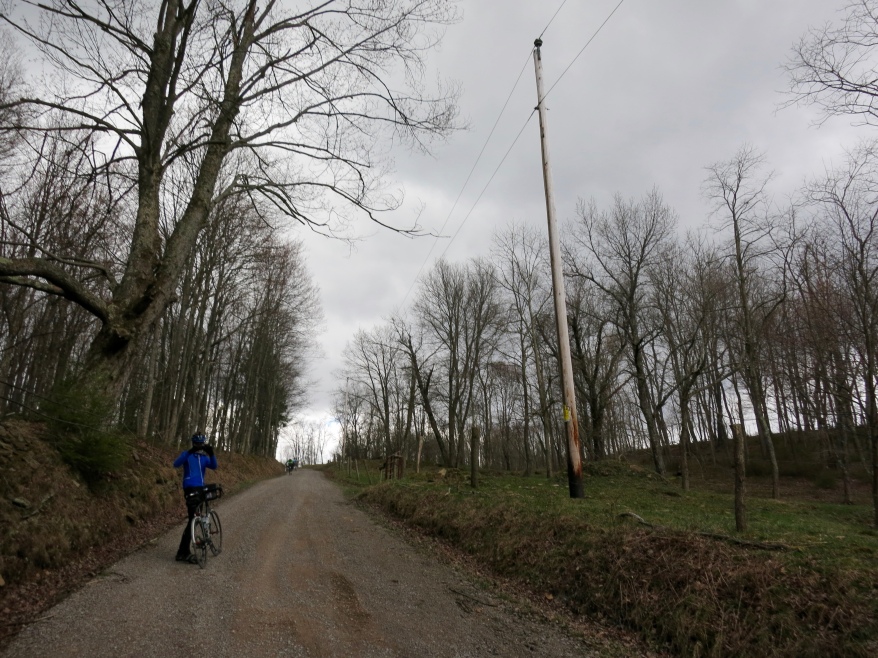 Despite teasing Jerry about our roads, we all knew it was an incredible pilgrammage that he laid out for us. The steep gravel sections were quiet, if challenging. We climbed from just under 1,000 to almost 3,000 feet in the first 40 miles of our ride.

The elevation change was significant enough to feel the colder climate. Some graupel fell on us for ambience. After summiting one climb we found ourselves on a high serene meadow. I’ve never done that on a flèche before. It was slow going, but gorgeous and unforgettable.

We left Pennsylvania to meander around the Savage River in Maryland, wondering if we were just riding in circles. And then we found more gravel, more climbs, and more sublime riding in West Virginia and Virginia.

As night fell, our team rolled on, wondering when the predicted high winds would arrive. Felkerino and I had learned about this foreboding flèche forecast as we settled into our Pittsburgh hotel on Thursday evening.

These potential conditions concerned our group, but we had to get home somehow, and our bikes were all we had. We gambled that our route, which headed south and east, would mean the winds – whenever they came – would generally be at our backs. 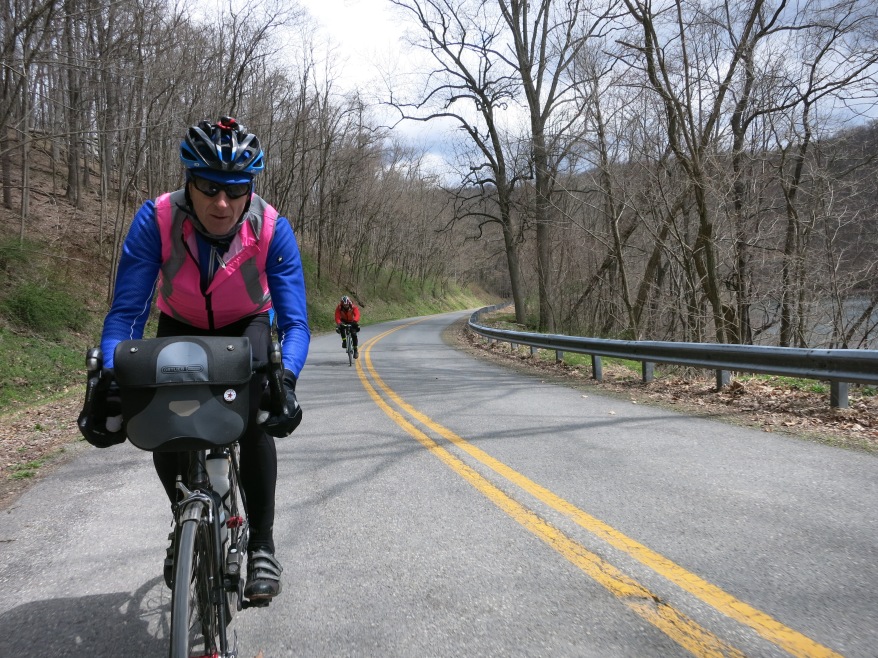 We were climbing our way to dinner when we heard the ominous rustle of wind through the tree branches. Leaves skittered across the road in response. As we pedaled higher and into less sheltered territory, the winds buffeted us about and began to roar.

This brought renewed vigor to our pedaling. There was nowhere for us to shelter so we pressed on to dinner, knowing that if we could make it there we could wait out the passing front. Just as rain began to fall sideways, we arrived to a welcome dinner and respite from the incoming weather.

Along with a passing rain shower, the winds also prompted a huge drop in temperatures, and we went from riding in the 50s to suiting up to deal with winds and temps in the 30s. I reminded myself that we’d dealt with these kinds of temperatures all winter so there was nothing to worry about.

As for the high winds, I didn’t know what we would do. Our group continued moving forward, confident that the winds would  be in our favor.

While we did have tailwind (and that’s nothing to take for granted) the relentless gusts presented other challenges, mostly in the form of downed branches on the road and my fear that a branch would break off and fall on us just as we were passing through. For the remainder of the ride, we had to pay extreme attention to the road surfaces in order to dodge any fallen debris.

At times, we experienced strong cross-winds, enough to physically move us about in the road. Fortunately the roads were quiet in the middle of the night so we could take up a little more space on the road if necessary.

We crossed the Potomac via the Spiral Staircase at Harpers Ferry, West Virginia.  The winds were swirling down the river, with the bluffs on either side of it forming a natural wind tunnel. I felt so tiny and powerless, as the wind bandied us about as it pleased. 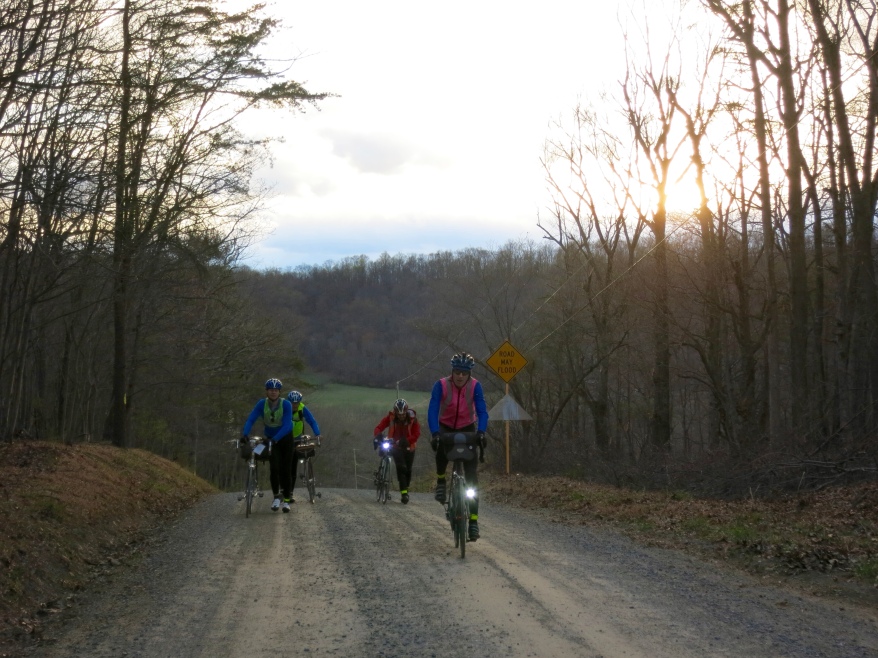 If we had been going the opposite direction, we would have had to stop. Instead, we crossed over the pedestrian bridge as fast as we could while the wind shoved us around, hauled the bikes down the stairs, and scooted quickly off down the C&O to Brunswick, dodging and occasionally dismounting to negotiate the fallen limbs on the path.

After crossing back into Virginia, we stopped in Lovettsville to control. Normally I think of controls on a flèche as a good food stop, but for this edition, I used them to compose myself and steel my body for the next section.

It was a good thing I did so because soon after departing the 7-11, it began to snow and we were exposed to more disconcerting crosswinds. A few miles later, a snow squall passed through. It was dramatic in its way, but definitely not what I’d call ideal night riding.

Our group worked very well all throughout the flèche, but particularly during these more challenging hours. No one freaked out, everyone kept an eye on each other, and we all stayed together or well within sight of the group.

We stoicly pressed on. A couple of times I wanted to freak out, but I knew that we each had to put all of our energy into getting the group down the road and, in particular to the final 40 miles on the W&OD Trail, where we knew we would have shelter, a solid tailwind, and we would be close to help if we needed it.

There was no time to coddle a freaking out flèche team member. Plus, the conditions were not out of control. Rather, it was uncomfortable and unsettling to ride along while the wind howled beside you. No idle flèche talk while gazing at the stars on this ride.

At the 22-hour control, a few members of our team snuck in randonaps, and a few others had toasted English muffins and coffee. Another team had chosen the same locale as their 22-hour control so we briefly swapped stories of our rides and of who we knew was still riding.

Time at the control passed quickly, and even though I think it was a needed break, I wished we hadn’t had to have a 22-hour stop. By this time, I hated the cooling down process brought about by going inside somewhere, and I was totally sick of eating, but knew I needed to keep eating so I could make it in good shape to the finish. So I spent my time at the 22-hour control completely annoyed about flèche rules, high winds, snow squalls, and the never-ending need for food. Good thing most people in our group were napping.

The W&OD Trail was a breeze (ha ha!) as it’s such familiar riding to us, and we arrived without incident to the Key Bridge Marriott while we watched first light pepper the sky. We learned that several teams had abandoned, the weather conditions proving too unfavorable. The members of our team all knew how lucky we were that our route had worked out, given the sketchy weather conditions. 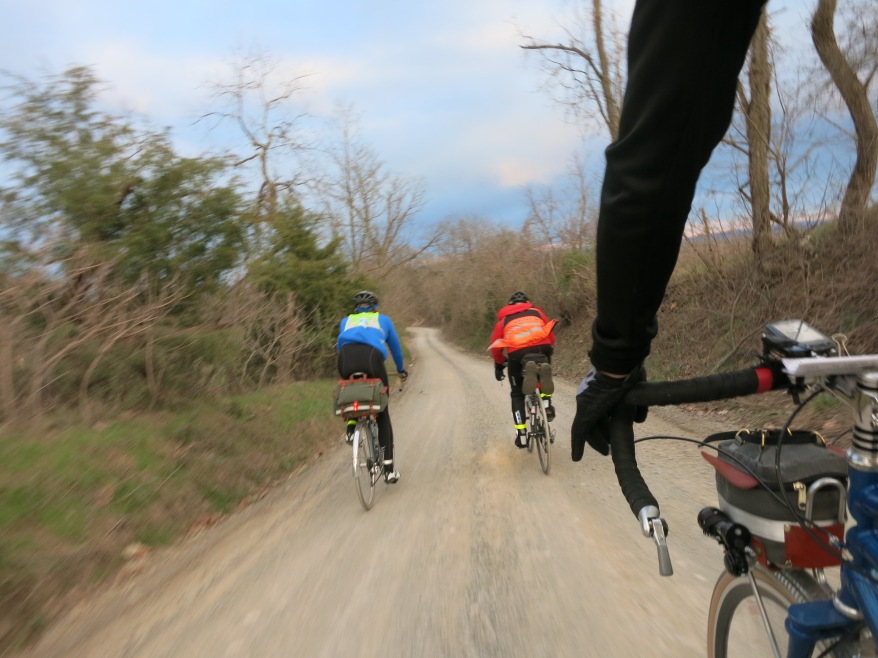 Early on in the flèche, as we crawled our way over the Eastern Continental Divide on some of the steepest gravel I’ve ever ridden, I embraced the mantra that the only way out for us was through. We owed it to ourselves to ride together and see all these quiet roads could show us.

This flèche with Team If We Lived Here We’d Be Home Already was one of the first times in a long while that I’ve felt like an explorer on a ride that ultimately ends at my house. I would love to recapture that feeling on another ride soon.

In the end, I have no grievances about our flèche. The only way out was through, and I’m proud of our team for our commitment to the ride as well as to the group. Many thanks to Jerry for organizing and routing us, and to the others on our team who made this such a special 24 hours and 233 miles of riding.

See the Strava track here, and my pics here.