I’m totally copying this post title from Bicycle Bug. Earlier this week, the man behind the D.C. bicycling blog Tales from the Sharrows put out the call for a guest post. Both Bicycle Bug and I drafted up the happenings from one of our commutes as potential posts. However, another local commuter rose to the challenge and we were left with our Sharrows-inspired posts and no place to publish them. What to do? Guest post on our own blogs. Ha ha! Yes, it makes no sense!

To that end, here is my experience of last week’s ride to #FridayCoffeeClub. Will you be attending? Please do!

Last Friday, I gave my Surly Long Haul Trucker a break and instead rode to #FridayCoffeeClub on my bold blue Velo Orange mixte. As some of you know #FridayCoffeeClub is a weekly java-slurping gathering of mostly cyclists that takes place weekly at Swing’s Coffee. It’s a growing group that always gets my weekend started off on just the right note.

I love the setup on the mixte: Berthoud bag in the front, useless-but-attractive bell that states “coffee” in sweet serif letters, Velo Orange matte silver fenders, and tan Acorn saddle bag on the rear.

Front view of the Velo Orange mixte and bell and the pretty, but useless, bell

I felt so stylish as I left home in Southwest D.C. that I decided to take advantage of the quiet (and recently widened, yay!) sidewalk by the Fish Market and shoot a few pictures of my bike as I rode. Pedal pedal click. Click Click. Pedal. Click. Happily I tootled along, taking pictures of the mixte and me. 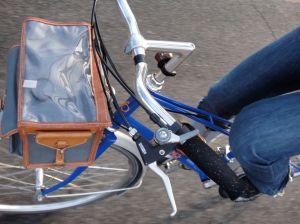 In the middle of my photo-snapping reverie, a cyclist politely announced his passing and went by. He was on a road bike wearing what I believe was a waterproof commuter backpack and cycling shoes.

Mortified at being caught in the middle of my Southwest Waterfront mixte photo session, I quickly deposited the camera back into the front bag, and went into pursuit mode.

I am sure I looked pretty ridiculous, as chasing down another rider is far beneath the aesthetic and soul of my beautiful Velo Orange mixte, but I wanted to prove that I wasn’t some narcissistic goofball. I was a “real cyclist.”

I don’t even know what being a real cyclist means, but in that moment I decided it meant not taking any more photos and catching him.

If there’s one thing that makes me batty, it’s the commuters who try to turn their morning rides into races. First of all, I can’t figure out why people are that excited to race to the office. It’s much better to make the bike ride last, right?

Second, there is absolutely no point to the made-up bike race, since nobody really knows where the start began or finish line is, except in our own minds. This is an imaginary race nobody can win. Third, they actually can be dangerous if they involve aggressive shenanigans, shoaling, or illegal movements.

Yet here I was, suddenly that person, in a ridiculous commute race of my own invention. Except that my fellow racer was so far ahead of me he had no idea what was going on.

My rival and I both made our way around the Bureau of Engraving up to the corner Independence Avenue and 15th. The mixte was gradually gaining on the rider. At least, in my mind it looked like it was.

At Independence, the competition took a left and sailed around the Washington Monument, past the World War II Memorial and up to the light at Constitution and 17th.

I took the same left at Independence, but then rode across the Washington Monument paths to the crosswalk to the Ellipse on Constitution between 15th and 17th.

I can’t stand the intersection at Constitution and 17th. It is a swirling rush hour hellfire of craziness, with drivers making illegal left turns and regularly running red lights.

And guess what? The light sequence near the White House favored me and I was able to get a slight lead while my unsuspecting rival waited for the light at 17th to change. Yippee! Why was I doing this? I don’t know. Too late to stop now.

I pedaled the mixte mightily around the Ellipse and veered onto the sidewalk over to 17th. Standing on the pedals, I sprinted up to the corner of Swing’s Coffee and over my arbitrary finish line. First! Go me!

The mixte makes the podium at Swing's

As I parked my bike, I saw the rider head up to Pennsylvania Avenue. Slightly embarrassed and yet excited, I shared the story of my victory to my coffee buddies, exclaiming, “It was all about route choice!”

Somebody said, “MG, what if he was coming here for coffee?”

Just as I finished my story, a new face rolled in and joined our group. He said he’d overshot Swing’s by a block and had to backtrack. As I listened to him say he also lived in Southwest, I realized that he was my morning competition and apparently, my neighbor and now fellow #FridayCoffeeClub member. Unbelievable!

Obviously kicked in the pants by karma, I shouted, “No WAY!” and smacked him excitedly on the shoulder with enough vigor to cause some of his coffee to spill. Oops!

Fortunately, I picked a made-up race with the right commuter. Jason is a really nice person who was completely unaware of my antics and said he’d even be back for another #FridayCoffeeClub, despite my efforts to beat him in a race in which he did not realize he was participating and my inadvertent attempt to spill his coffee.

As we rode off to our offices, I told my friend Lane that the mixte made me do it. I’m not normally like that, and I never feel like going into race mode on the Surly Long Haul Trucker.

“That mixte is a menace,” he responded.

The menace mixte. Maybe it isn’t the sweet bike I thought, but I still learned some valuable lessons from this ride:

1. I need to practice stealthier bike photo sessions.
2. Mixtes are not good racing bikes.
3. You never know who’s going to show up at #FridayCoffeeClub, so practice good manners on the road.
4. Made-up commute races are just undignified silliness.

Please come to #FridayCoffeeClub tomorrow. My racing days are a thing of the past, I promise!