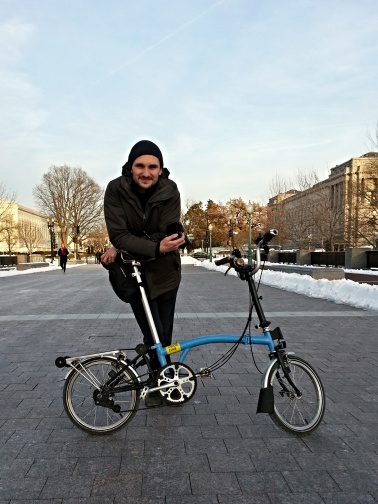 Tuesday, the mighty social networking tool known as Twitter paved the internets to an in real life (IRL) encounter with photographer Dmitry Gudkov.

Among other projects, Dmitry is the photographer behind #BikeNYC, a dynamic series of portraits of the people who ride bikes in New York City. Through it I have learned about the people of the New York City bicycling community and glimpsed various places where they ride.

I initially saw Dmitry’s work via my flickr wanderings, and the people at the flickr blog even interviewed him about how #BikeNYC came to be.

I began my Tuesday in a cranky mood after feeling like a fool for riding my bike into work while road conditions remained questionable or poor for bike riding in so many places after Monday’s snowfall. Probably should have done the run commute, I thought.

I was idly checking my Twitter account to see what was going on in the outside world when I saw a tweet from Dmitry accompanied by the #BikeDC hashtag and a photo of our Capital Bikeshare bikes.

After confirming that he was in D.C., Dmitry asked if I had ridden my bike and I went from feeling duped about riding to work to having an “everything happens for a reason” moment. We arranged to meet later in the afternoon.

The day was cold, probably around 30, but the sun cast its long golden late-afternoon shadows down the National Mall and managed to convey that spring will arrive at some point, just not today.

Even so, the cold was at that level where you step outside and know that when you stop moving the clock will start ticking on when you will shift from comfortable to chilly to hand-throbbing territory.

Fortunately Dmitry and I both arrived around the same time and managed to hang out and happily talk while he shot a few photos as the sun dipped gradually lower in the sky.

It really is a thrill to meet someone whose work you have followed over the years and who you admire.

I was also excited because Dmitry took a portrait of me with my Quickbeam. If I had known it was going to have its picture taken I might have washed it and redone the bar tape, but that scruffiness is what makes it real, man. Or something like that. I do still need to wash it.

Mr. SharrowsDC even happened by so that I could evidence my #BikeDC credentials. Now I owe him $20 plus whatever it cost for him to exceed the 30-minute minimum on Capital Bikeshare for pausing to say hi to me.

As we were about to head our separate ways I awkwardly asked Dmitry for a photo. I always get geeked out asking people who really know how to take photos for a photo.

Fortunately for me, he graciously accepted and this picture, complete with Brompton and his Vision Zero sticker, is the resulting cell phone shot. I only wish I had a photograph of his light blue shoelaces. Next time!

And a few minutes later, I saw this. That’s how the pros do it!

I first “knew” about Dmitry through flickr. I then started reading his blog so I could keep up with his #BikeNYC work, and eventually I connected to him on Twitter and Instagram. I continue to be pleasantly surprised and also grateful for the ways social networking tools can meaningfully connect us.

Many thanks to Dmitry for taking the time to meet and to take a portrait of me. What a privilege to meet you in real life.