Around this time last year, I was 90 percent blah about cycling. I appreciated the bike for how it improved my quality of life and distanced me from driving and other transportation options, but I was not enjoying the rides.

Blah, time to go get groceries on my bike. Blah my boring commute awaits. Blah a brevet. Blah to it all.

But 2017 turned out to be a good year for my bike riding attitude. I began to like bike riding again. What a refreshing feeling, especially considering the overall time I spend in the saddle.

I put together a month-by-month look at 2017 in photos as a way to remember some of it. I hope you enjoy it as well.

A cold day on the National Mall

Still heavy in the riding funk, but cold days improved my mood. Few people out and about, and overall a quieter city when the chill moves in. This photo is from a ride to work on a chilly January day. During this month, I was in transition to a new position in a new agency, and ended up caught in the crosshairs of a hiring freeze.

It was a nerve-wracking time, but I found comfort in the cold. Cold isn’t always comfortable but it wakes you up, a virtual slap on the cheeks. Cold is good at bringing perspective, and its bite helped me focus on the present moment.

Made it! New job, and a commute that is almost three times as long as my previous daily ride to the office. It skirts the heart of the city such that I mostly avoid the chaos of downtown traffic.

This pic is from a February ride home. I paused to bask in the golden hour on my pleasant new route, and embraced the excitement that comes with taking on a fresh challenge. 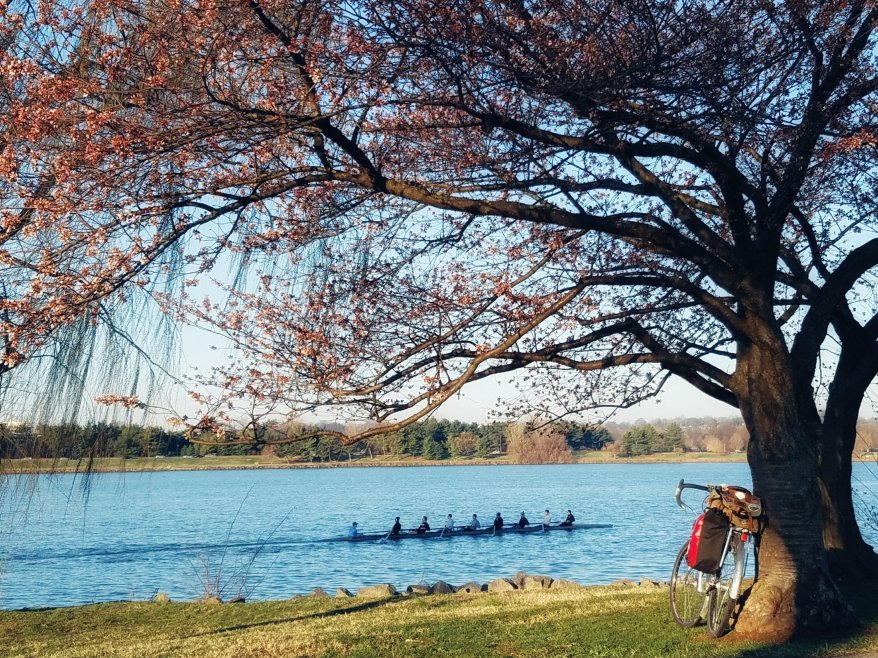 Buds on the trees and the crew team on the Potomac

Cherry blossoms began to bud, and an earlier departure on the morning commutes meant regular meetings with the Georgetown Crew team. I loved intersecting with these boats on the Potomac. We’d ride alongside each other, and I would gradually pull ahead as long as I didn’t decide to stop for a photo. This is from my sunshine-filled birthday commute this year.

Another great gravel find from our friend Jerry

Our friend Jerry put together another spectacular fleche, this time a lollipop route that started in Cumberland, Maryland, finished in D.C., and included plenty of surprise gravel sections.

Consistent with Jerry’s routing style, at least one of these surprise sections included unpaved climbs up and over the Eastern Continental Divide. It’s never boring when you ride with Jerry.

Buttercups on the Capital Crescent Trail

It was in May that I realized I’d shaken off my bicycling funk. Commute miles were adding up, and weekends were full of early ups and randonneuring rides. My cycling fitness and strength increased, and I loved it.

I was also extending my route on certain days to take in an additional mile on the Capital Crescent Trail (CCT). I’m not a huge fan of riding the trail, especially during the shorter days, but I enjoyed cruising by the bright yellow buttercups and other spring wildflowers.

At the beginning of June, Felkerino and I rode the D.C. Randonneurs 600K, thus completing a Super Randonneur series after a year off from any rides longer than the fleche. It surprised me how much I liked rolling around the countryside on the long rides, especially given how much I loathe the 4 a.m. start time. I detest it!

Not this year, though. The rides allowed plenty of uninterrupted time with Felkerino and hours with the simple task of following a cue sheet and lopping off miles on our tandem. I separated myself from the headlines, my Instagram feed (mostly), and other big picture worries.

My thoughts could roam about the countryside, but I could only get so wrapped up in them because progress through the ride was paramount. As I write, I’m excited about what next year’s randonneuring events will bring.

This photo is from the second day of our 600K, parked under the shade while we responded to an Information Control. The rando life.

From the bike to a midday meeting

June bonus photo! Mid-year was also the time where I was figuring out how to ride my bike to work meetings in the city. I don’t ride to work in cycling-specific clothing, but do wear clothes I can sweat in, and change into work garb once I arrive.

I picked up some key wardrobe pieces that allowed me to make the quick adjustment from a ride across town into meeting-appropriate business garb. It was a good challenge to figure this all out, and I’m pleased that I’ve (mostly) dialed in my work to work-meeting system.

Felkerino and I love bike touring in July. Long days, summer heat, and the desire to escape the city and explore draw us to unfamiliar places and new-to-us roads each summer. This year our touring took us from Albuquerque, New Mexico, to Boulder, Colorado.

Not all roads were new. For example, we took our tandem up and over Rollins Pass for the second time on our final day this year. It was one of the most frustrating days of bike touring I can recall, but somehow we pedaled and limped our way over the uninviting surface and pitched into Boulder without too much drama.

I mean, about four flat tires in the span of five miles, and a horribly bumpy and grumpy descent (horrible!), but other than that, no drama. Ironically, the first time we rode this pass I thought it was the best day of bike riding ever. Amazing how one’s mental state can shape the day.

My commute now takes me through Georgetown on a daily basis. I usually avoid it in the afternoon because it’s too much stop-and-go commute traffic. Honestly I’m not a huge fan of Georgetown, but it is a pretty neighborhood to ride through in the morning.

This is one of the old cobble streets I use occasionally to skirt across Wisconsin. It’s a teeth jostler, but my Velo Orange mixte – which I rode about half of this year – was up to the challenge.

Late September found me on my annual C&O pilgrimage to Harper’s Ferry, West Virginia, for the Freedom’s Run Marathon. In a change of pace, there was no rain, just sunny skies for the 68-mile ride out. A perfect marathon weekend, and I hope I can go back again next year. 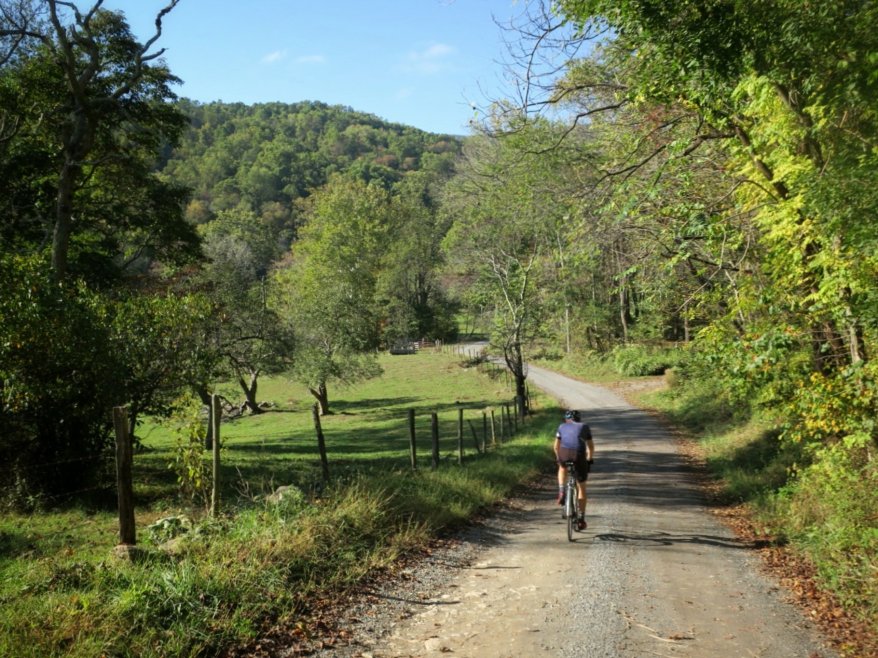 On the hunt for fall color on Harris Hollow Road

We met up with our buddy Jerry for a ride around the Shenandoah in hopes of spying some fall color. Alas, the leaves took their time turning this year so our ride was still dominated by shades of green.

No matter, the ride was spectacular, and the unpaved Harris Hollow Road outside of Little Washington was in good riding condition, and a real pleasure to saw our way up and down.

Leaving Philadelphia after an exciting weekend at the Bike Expo

The leaves eventually began sporting their fall hues in November, just in time for our annual trip to the Philly Bike Expo. As in previous years, we parked outside the city and meandered 25 miles along the Schuylkill River Trail.

We stopped for some coffeeneuring in the town of Manayunk and then arrived in Philadelphia. It’s a refreshing ride along the trail, the path is flat and fairly wide, and it helps burn off the extra energy accumulated during the drive up. 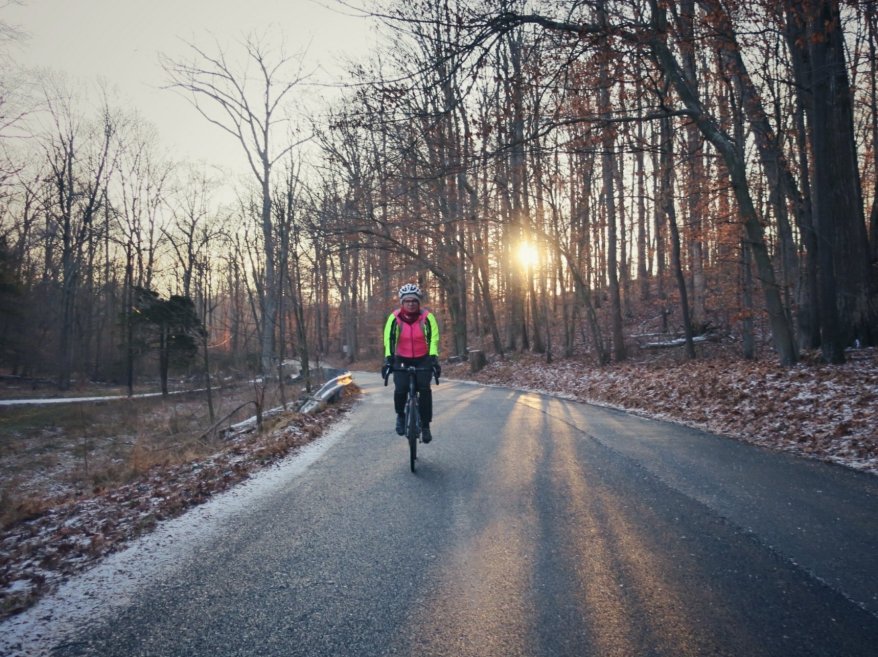 Early miles with Pat on the Woodbine Wallop

I thought I was off brevets for the rest of 2017, but Felkerino thought it would be a great idea to take on the Woodbine Wallop. I was not that thrilled about a sub-freezing start, but a ride in the countryside sounded appealing so I sucked it up and waited for the temperatures to rise.

The Woodbine Wallop is a beautiful ride, although I personally prefer rides that are a little less hilly during the winter months for the sake of temperature management – less sweating up on the rises only to be chilled on descents. But this hilly as heck brevet certainly imparted a feeling of accomplishment at the end, and made the pizza taste extra good. 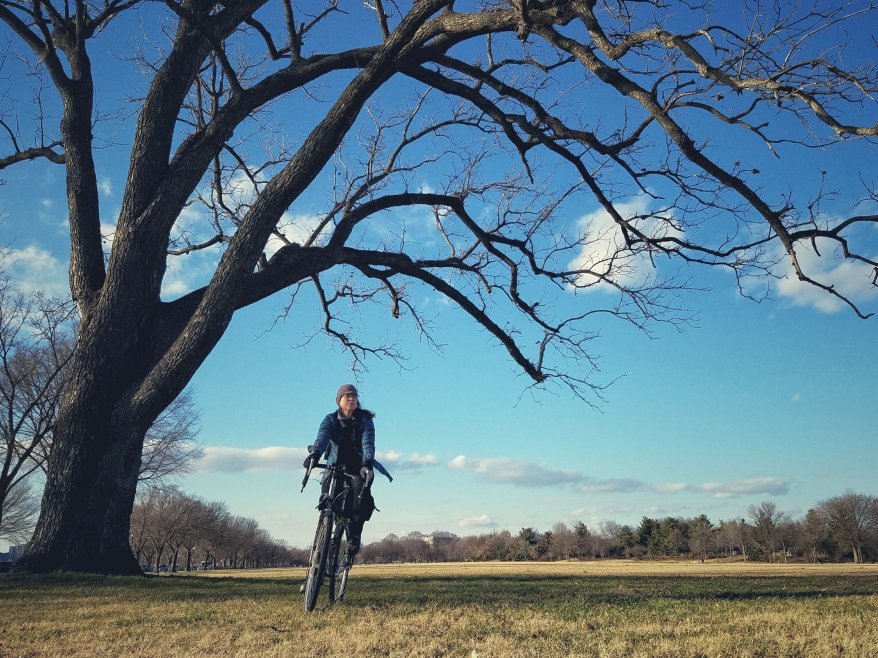 As I write this, I sit at just over 8,000 cycling miles for the year – a mix of brevets, bike touring, and daily commutes. It’s been a solid cycling year, and the best part is I liked it. Thanks to Felkerino for keeping my bikes in working order and for sharing so many miles with me. Thank you to the cycling friends who kept company with me this year, especially our buddy Jerry.

Finally, thanks to all the coffeeneurs and errandonneurs who believe in coffee shop rides and transportation cycling, and support the challenges I facilitate through the blog. Cycling for sport is fun and healthy, but everyday cycling for transport and fellowship will save the world.