If you read blogs about bicycling, it is quite likely that you know of Kent’s Bike Blog. Kent is based in Issaquah, Washington, and his was one of the first blogs I turned to when I first became interested in long-distance riding. I wanted to read others’ stories of long rides and learn from their experiences.

At the time I began reading his blog, Kent was writing reports of his randonneuring rides as well as his time riding the Great Divide Mountain Bike Race (on a single speed, no less). Kent’s Bike Blog inspired me.

Later I discovered that he also loves to read and I’ve actually read a few books based on his recommendations. He has even put together an extensive list of bicycling books that you may want to peruse, 50 Good Bicycle Books and 50 More Good Bicycle Books. I am thrilled he agreed to be part of this On Writing & Riding series.

1. If you were to send out a Tweet summarizing your blog, what would it say?

Sporadic thoughts and ride reports from a guy who thinks a lot about bikes. Includes various digressions, beware!

2. You were an early adopter of blogging, and started writing in 2005. Your blog was the first I read that included posts about randonneuring. It’s also how I first learned about the Great Divide Race. What made you start blogging about bicycling and what inspires you to keep writing about it?

I actually started posting ride reports in 1999, effectively blogging before blogging was a thing. I got into randonneuring that year and decided to write about it. It was interesting to me and I guess others found it interesting as well. Those old posts still live on at Kent Peterson’s Randonneuring Page.

3. You named your blog Kent’s Bike Blog. Have you ever looked back and wondered if you should have titled it something else? If so, what would you have re-named it?

I spent about half a second coming up with the name. Occasionally I think if I’d named it something broader, more vague or clever I wouldn’t feel bad about diversions into things like the books of Ray Bradbuy (hey, he rode a bike!). But mostly I’m happy with the name, it conveys my possession, for better or worse,of what is up there.

4. Who are you writing for? Do you have a particular audience in mind when you write your posts?

I don’t write for a particular audience. I write about things that interest me. Sometimes I write to remember and other times I write to help me figure out what I think about something. 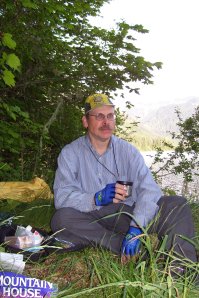 5. What aspects of bicycling do you enjoy writing about? Have those aspects changed since you first began your blog and, if so, how?

My favorites are when I find something simple and cool. It can be mechanical trick, a nifty place to ride, a gadget, a great cafe or some great story a pal told me. I guess all those things are kind of timeless, except for the gadgets.

And the gadget posts are the ones that don’t age well. I think that says something and maybe someday I’ll figure a bit more about what I might want to say about that.

6. You live car-free so you use your bike for transportation and utility cycling. You have ridden huge rides like the Great Divide, and you also did randonneuring rides for many years. In addition, you also go bike touring. You work at a bike shop. And now you ride a scooter, too! Are there common threads across all these types of bike riding activities that you find yourself writing about or do you see them all distinctly?

I think the common thread is a kind of simplicity. I like paring things down, figuring out how little is needed to do something.

Editor’s note: And thus, my five-line question is answered in two succinct sentences. 🙂

7. In addition to being a bike rider who writes you are an avid reader. What writers have influenced you in your own writing and why?

Thoreau is a big influence, as is Ed Abbey. Both guys who were kind of cranky critics of society.

But I’m by nature quite cheerful and positive so I love guys who really love life, folks like Christopher Morley, Ray Bradbury and Daniel Pinkwater.

Right now Ruth Ozeki’s books are making me think a lot. Her latest, A Tale for the Time Being, is terrific.

8. What are the best parts of being a blogger?

What I love is the full creative control. If I don’t have something to say, I don’t say it. If I want to post in haiku, I can.

9. Was there anything about maintaining a blog that surprised you?

I’m surprised at what gets a lot of hits and links. If I wanted to get a bunch of traffic, I’d be a lot crankier online!

10. Do you have any favorite posts or posts that you find yourself going back to? What are they and why (send links, too!)?

Here are a few:

11. What tips do you have for someone who wants to start writing a blog, particularly a blog about bicycling?

Go for it. If you write about what interests you, you may find other folks find it interesting as well. Don’t write if you don’t think you have something worth saying.

12. What did I forget to ask you that I should have?

“Why aren’t you posting as much these days?”

Twitter is where all the “hey look at that!” things go now so I no longer do little “hey look at that!” posts. I only post when I’ve got something new to say and since I’ve been at this since 1999, I’ve already said a lot. And I’m spending more time writing things that aren’t blog posts.