Nothing To It But To Do It: Linel of Women BikeDC, Part 2

Women are expected to look pretty and be delicate and dependent, among many other things. Riding a bike requires uprooting at least some of those gender assumptions, forcing ourselves and others to rethink preconceived ideas of what women can or cannot, or should or should not do.
—Linel

We’re back for the second half of our interview with Linel of BikeDC (Don’t worry if you missed Part 1– just click here). Today we discuss some of the issues women deal with when riding and ways to keep pedaling through it all.

How does it feel to be a woman who rides in an area where women are less than 26% of the riding population?

Exciting! I feel very proud of being part of a growing segment of the cycling population in the DC area. I love a challenge, and try to convince every female in my life to ride a bike!

What are the issues you deal with as a woman cyclist, or is it something you think about?

I try not to, but can’t help worrying about my own safety when riding home late at night. On a lighter note, all the mansplaining happening at some bike shops can be extremely exhausting and frustrating. 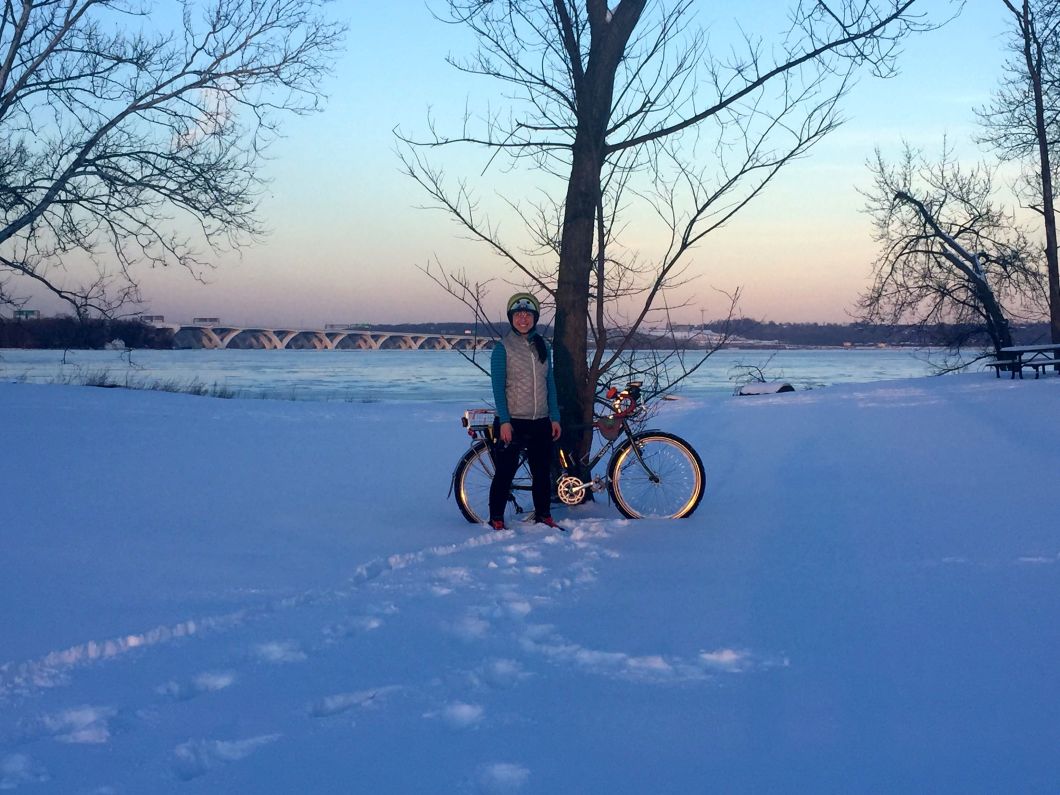 What prevents more women from riding?

Aside from the things that prevent most people from riding, e.g., aggressive and distracted drivers, lack of cycling infrastructure, I believe pervasive gender expectations of lady-likeness and perfect hairdos and makeup may work as deterrents for some women.

Related to this, some women may think they have to look a certain way (fit and slim) or need to go fast to ride a bike. Fast is not the only way to get from point A to point B. In other cases, perhaps not knowing where to start, paired with the not-uncommon mansplaining happening at some local bike shops can be a real turnoff.

You make such a good point with your comment about gender expectations. What do you think can be done to address these stereotypes?

Last week during my usual work coffee break, I asked the male cashier about the bike I see parked outside everyday. My question turned into a conversation about riding to work followed by his comment on how I don’t look like “the kind of person” who rides to work everyday.

I couldn’t get him to explain what that meant, and instinctively took his comment both as a small victory and a backhanded compliment. Small victory because I challenged his preconceived idea of what “someone who rides a bike to work every day” looks like. Backhanded compliment because, what does that even mean?!

I, too, internalize social constructs as much as the next person and immediately starting sorting through the things that, according to this guy, could made me “not look like someone, who rides a bike to work everyday.”

Was it my gender, looks, age, physique, ethnicity? Was it my outfit? Sigh. It can be extremely maddening to get caught up in exactly the kind of mind game one is trying to break through.

Women are expected to look pretty and be delicate and dependent, among many other things. Riding a bike requires uprooting at least some of those gender assumptions, forcing ourselves and others to rethink preconceived ideas of what women can or cannot or should or should not do.

It requires skill and a certain level of independence and strength, all things that have been traditionally deemed masculine. I like to think that, as women who ride bikes, we question and upset some of those gender expectations and force others to rethink them as well.

The reality, however, is that some women push more actively against those gender boundaries than others, and some jobs require more dressing up than others.

Once I get to work, I spend some time in the locker room trying to get my hair to behave and putting some makeup on to look “presentable” for work. Granted, I do not try very hard, but still feel this is part of my professional uniform.

Most men who ride to work don’t feel the need to spend 30 additional minutes on their appearance to look “presentable” after changing into their work clothes. By contrast, a lot of women do, and denying this reality when trying to increase the number of women riding to work and other places is a non-starter.

To simplify my “presentable for work” look, I keep a small hair dryer, makeup, hair product, body wipes, shoes and a bottle of wrinkle releaser in my locker. I carry my clothes —suits, dresses, etc.— in an Eagle Creek packing folder that goes in my Wald basket every day.

When I switched to wearing non-work clothes on the bike, I created a set of index cards so I wouldn’t forget anything in the morning until it all became second nature. I haven’t looked at my index cards since and carry less stuff to work now than I did when I first started.

All that goes to say that, like most good things, commuting by bike takes effort and practice. And like most things, riding a bike for transportation gets easier with practice. You figure things out as you go and might eventually even worry less about what your hair looks like on the most humid of days.

Riding a bike and finding strength and confidence in something other than one’s hair is just as valid a way of discarding gender expectations as any other. By the same token, you never know who will be inspired by the rad women of #bikedc, WABA Women & Bicycles and the Alexandria Spokeswomen to hop on a bike and let their hair down on the streets of the DMV (D.C., Maryland, and Virginia). Cause and effect work in mysterious ways. 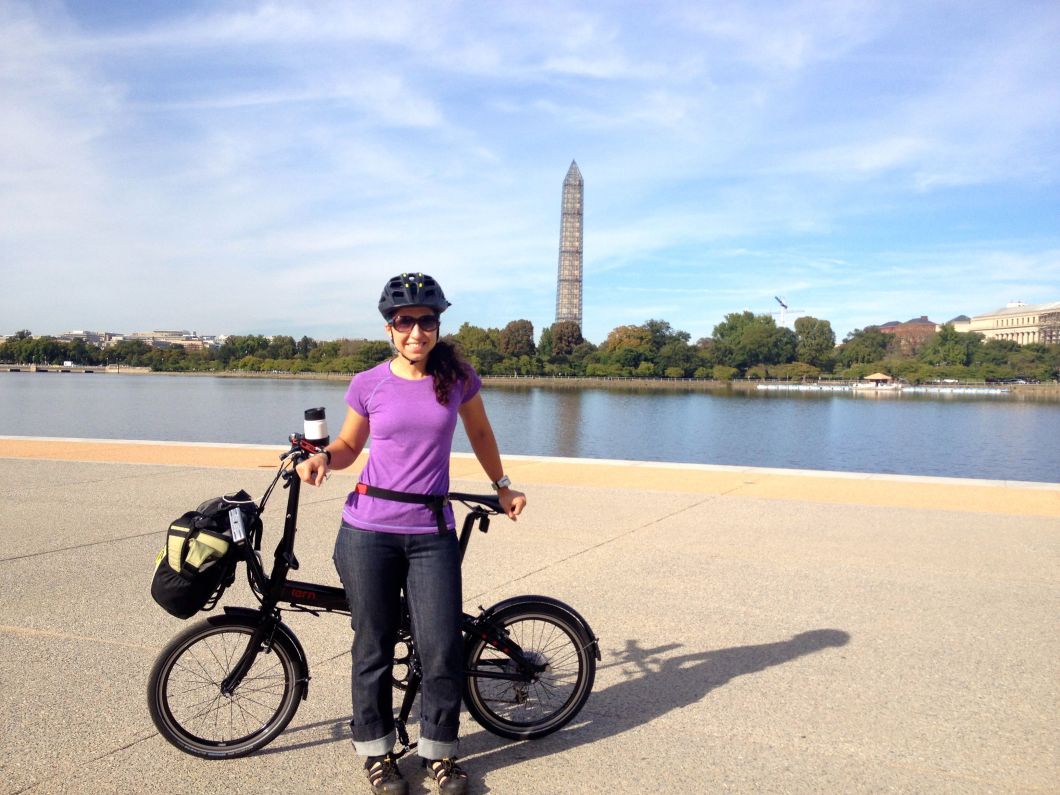 How has riding a bicycle influenced your life?

Bicycling has brought many strangers into my life as acquaintances and friends. Case in point, lots of random people would ask me about my folding bike on the MARC train platform when I lived in Maryland. As a result of all these interactions, I have an ever-growing circle of friends and acquaintances that enrich my life in many unexpected directions.

Riding a bicycle has increased my overall levels of happiness and confidence exponentially! I have learned to approach many hurdles in life as if they were a ride on a new road. At first you might feel apprehensive and tentative, but once you do it, it becomes clear that all it takes is committing to that first push of the pedal. You may go slow or even fall at first, but if you keep at it, you will get there.