Avid cyclist and stalwart commuter Pedro Gringo is one of my favorite people from the flickrverse. I regularly check in on his two-wheeled activities, which range from power naps and puppy rescues to mountain biking and gear tests.

When I saw his fat bike (see how hip I am saying fat bike?), I knew it would make a great contribution to Bikes to Like. Thanks, Mr. Gringo!

This bike is a weird one. The frame is a Surly Troll. The fork is from a Surly Pugsley. The rest of the parts come from an assortment of other bikes and boxes of parts that I’ve collected over the years.

The front wheel is from a snow bike with a 26×3.7″ tire. The rear wheel is a single speed hub built on a Downhill mountain bike rim with a 26×3″ tire. It has road bike drop handlebars and is set up with the same dimensions as my road bike with the exception that the handlebars are about 3/4″ higher.

The drivetrain is also an odd mix. It has 2 chainrings up front (20/32T) and there are 4 cogs in back (17-23) and Shimano Ultegra STI levers to do the shifting duties.

It is my townie bike. It is great for liquor store runs. I’ve taken it mountain biking many times and have found that it handles VERY well on rough, rocky trails. It is a bit scary on bigger drop-offs.

I’ve done roadie hill workouts on it. Nothing like hauling a 37 pound bike up a 17% gradient to really get your blood flowing. The gearing isn’t really friendly to doing much of a long ride. Top speed is about 17 miles per hour on the flats if I’m pedaling really fast.

Surly’s description of the Troll model ends with this line, “Build it up, ride it for a while, then reinvent it.” I take that to heart.

This bike has started its life as a drop-bar, fat-tire, snow bike that gets ridden all over the place. Next week it will likely be a fixed-gear commuter with fenders. By spring it will have touring wheels, racks, and fenders on it. It will definitely be pulling a 7′ utility trailer later in the year. It won’t do everything, but it does almost everything I love doing on a daily basis.

4. If you had to describe your bike in one word, what would it be?

Huh? (I know that’s more of a syllable than a word. It is, however, people’s reaction when they see it for the first time.) 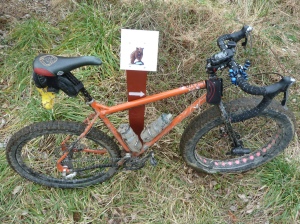 5. Fenders or no fenders and why?

Today? No. No-one makes fenders that will fit it. I have been building a set for a while now by going old school with sheet metal, a hammer, dolly and sand bag to pound out my own fenders for it.

So far I’ve just managed to mangle up a lot of perfectly good sheet metal. When it goes fixie in its next incarnation, I’ve got fenders and mud flaps ready for it.

6. What is one of your favorite memories with this bicycle?

Crossing Seneca Creek in 30 degree temps in the middle of January because I’m too stubborn to ride a bridge that was built that ruined my favorite creek crossing.

Tuna Casserole Surprise. When I was a kid, tuna casserole surprise was made by taking a can of tuna and mixing it with whatever was in the fridge, stirring it up, putting breadcrumbs on top, and shoving it in the oven. 1970’s Americana cuisine at its best… or worst when mustard and raisins got their call to duty. “But you said you liked raisins!”

That describes this bike perfectly. The frame is the can of tuna. The mixture of roadie and mountain bike components came out of the fridge. The fat tires are the raisins and the drop bars are the mustard. My brain is the oven.

This bike is utterly ridiculous and should be horrible to ride. I can’t explain why it is so much fun. It must be experienced to be appreciated.

8. What is your favorite accessory on your bike and why?

It is a tie between the unofficial Lance Armstrong “Livestrong” Truck Nut and the Hello Kitty stickers. Neither serves any purpose except to amuse.

9. If your bike could talk, what is one thing it would say to you?

10. What did I forget to ask that you want to tell me about your bike?

Why? I have no answer for that question. There’s no good reason for this bike to have come into existence. I’m glad it did though. I can’t help but have a huge grin on my face while riding it.