This past weekend D.C. hosted the Rock & Roll Marathon and 1/2 Marathon. This event occurs right around St. Patrick’s Day as well as my birthday, and it has an incredibly festive feel. Runners dress in green, wear costumes, put on kilts, and sport an abnormal amount of plaid for a running event.

The day turned out well for a romp around the city, with warmer temperatures than forecast (from high 40s at the start into the high-50s by the afternoon), light winds, and overcast skies that gave way to sun late morning. (Weather forecasting is becoming an issue around here.)

This juggler is a regular at many D.C.-area running events. Photo by Felkerino

The Rock & Roll organizers made changes to this year’s route which took us off of narrower residential streets and allowed for the throngs of runners to spread out over the roads during the early miles. This made for much less elbow-to-elbow running than last year’s event, and allowed mid-packers like me to run with greater ease. 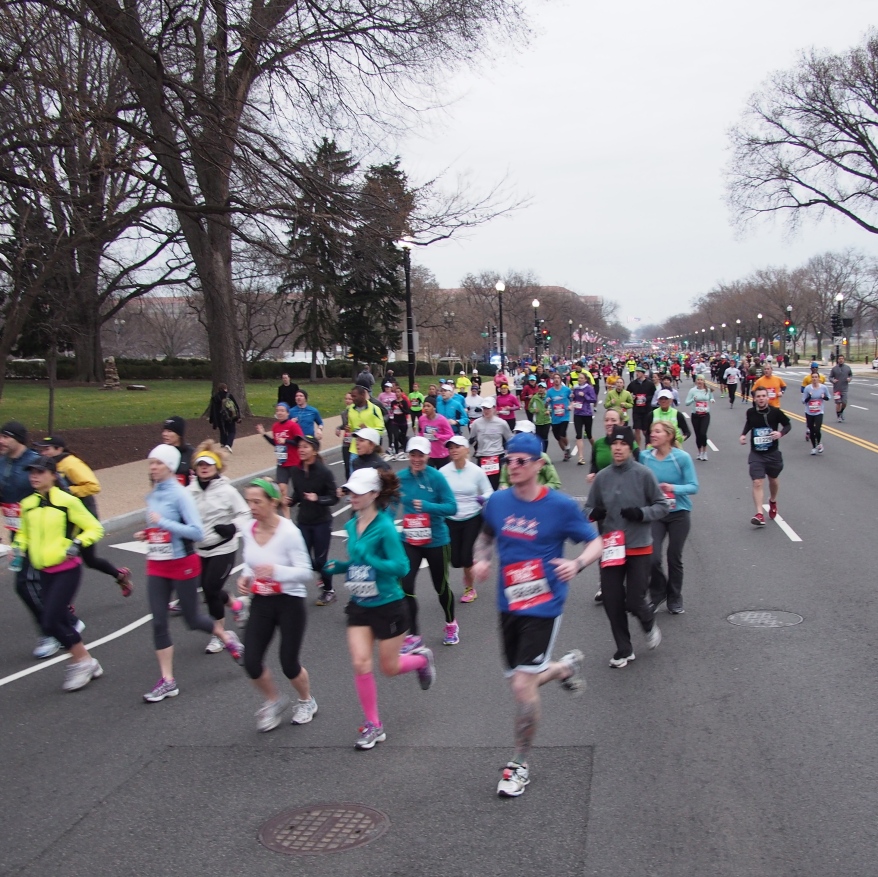 Originally signed up for the full marathon distance, I ended up running the half for a few different reasons. I have been doing some self-reflecting– and berating– about doing the half and not the full 26.2, but ultimately I’m glad about the decision I made.

Training Concerns. My training, while similar to previous years, did not leave me confident about the marathon distance. I was still a little freaked out about how the top of my foot had started hurting at the end of the Marine Corps Marathon in October, and I did not want a repeat of that.

Even with no current pain in the area and a change in shoes, I still lacked full confidence in my body to go the distance, and felt I had not put it through its paces to best prepare myself.

Fatigue. I switched jobs late last year, and I can see that it is taking me time to adjust to the new environment and work. Friday arrives and I feel more tired than normal. That was the case for me the Friday prior to Saturday’s run.

I attribute this fatigue my new routine and work expectations, and imagine it will dissipate as I become more accustomed to them. It surprised me how much a new desk job can still impact my energy levels, but there you have it.

The Bail-Out Option Exists. Unlike Marine Corps, which is solely a full marathon, Rock and Roll offers a half and a full distance. As I was picking up my bib number and shirt, I saw a sign noting that if marathoners wanted to change to the half, all they had to do was run the half. I examined the race t-shirt and noticed that it said both half and full so I did not even need to burn the race shirt if I opted for the shorter distance.

I went home and told Felkerino that the run organizers allowed marathoners to make last-minute switches to the half. He looked at me and said, “I see you are already giving yourself options.” I suppose I was.

I Double-Booked My Weekend. After registering for the Rock & Roll marathon, I also signed up for WABA’s Vasa Ride. That meant outings and early rises on both Saturday and Sunday.

As I ran, I found my mind drifting to next day’s Vasa Ride and how much I was looking forward to riding it on tandem with Felkerino. While the Vasa Ride is a casual event where there are no official finishers, I had never participated in it before. I wanted my legs to have pop in them on Sunday so that I could enjoy the ride and day out with my husband, as opposed to feel worn out and uncomfortable.

Heading toward the finish.

The Bail-Out Option Appeals! All along the half-marathon route, spectators cheered us. As we neared the 12-mile mark, people began shouting variations of “Almost there!”

As the split for the marathon and half-marathon approached, I could hear the pulsing music from RFK Stadium (the finishing area) as well as the PA system’s broadcast of Rock & Roll half-marathon finishers crossing the finish line.

From past experience, I knew the half and full marathon split was a tough one. Almost 20,000 people ran the half-marathon this year, compared to 3,550 people who ran the full 26.2 miles. After the half-marathoners split off, it’s a lonely couple of marathon miles.

In part, that is nice because you don’t have to worry about crowded roads, but the excited crowds diminish, the course becomes quieter, you start another 13.1 miles, and you have more time in that quiet open space to contemplate exactly what you’re doing. It’s tough mentally, at least for me.

None of that appealed to me on Saturday so I made the split for the half-marathon finish and called it a day. As I crossed the finish line in front of loads of cheering people, I still had pep in my legs and a smile on my face. I realized that I experienced almost no discomfort over the course of the run. Those are all things I like to have at the end of an event. And, as I wrote, the Vasa Ride ended up being just great, which I doubt would have been the case had I continued running.

Also, Saturday’s run served as a good reminder of both the physical and mental aspects that go into these endeavors. Yes, it’s important to be trained so as to avoid pain and injury, but mental focus is also critical. Fatigue from work interfered with getting into the mindset I wanted for the weekend. Double-booking my weekend distracted me. I let the bail-out option seep into my mind and linger there too long. As I’ve said before, when I start an event, I want to be all in for whatever distance I’m doing, and I definitely was not in that place on Saturday.

Nevertheless, I was thrilled that I was able to be part of D.C.’s Rock & Roll festivities. No, I did not go the full distance as I originally planned, but I had to concede that I did not have it in me on Saturday. Sometimes halfway is far enough, I thought to myself as I finished.

I had a fantastic time running 13.1 miles and touring parts of the city that I rarely see (like Harvard Street and that hill up to Calvert from Rock Creek Parkway!). As I crossed the finish line, I told myself to make sure to sign up next year. The entry fee is much higher than a brevet, but it’s an event too much fun to miss.