Over the last three years, I have developed a hopeless crush on the Hilly Billy Roubaix. This 72-mile ride over unpaved state roads out of Morgantown, West Virginia, raises my heart rate and heightens my senses. Despite muddy roads and unrelenting steep gravel climbs and descents, I can’t stay away.

The Hilly Billy Roubaix has little compassion for townies like me and does its best to remind me of my townie roots every chance it gets. It doesn’t care that Felkerino and I show up on our 2004 Cannonade mountain tandem to try and appeal to its romantic side. To the Hilly Billy Roubaix, riding a tandem here is simply a concept ride concocted by naive townies with no sense of their limitations.

A week of wet weather combined with pouring rain in the starting miles made this year’s edition of the Hilly Billy Roubaix the most intimidating yet. I listened to JR give the pre-race announcements and trembled nervously in my Sidis as the rain fell steadily down.

As JR talked, I contemplated the erratic nature of this ride. Unlike other courses I’ve ridden, the Hilly Billy has a distinct spirit– one that is decidedly unsentimental and somewhat crabby, if you ask me. Its ever-morphing landscape makes my heart pound out of fear, respect, and perhaps a little unrequited love.

The Hilly Billy course is like a haunted forest. You don’t know exactly what you’re in for, so you best pay attention. Our first year riding Hilly Billy, the sun shone and the roads were smooth and dry, but each year since the course has become gradually wetter and more daunting.

This year, the infamous Little Indian Creek at mile 8 was a yawning mile of water trying to eat bikes for breakfast. Recent rains had converted another segment not long after Little Indian Creek from a pleasant creek-side road to a raging tributary. Water rushed toward us as we churned our wheels through it.

A new climbing segment added to this year’s route contained big rocks in the middle and peanut butter mud on its sides. As we fixed one of the three chain sucks we suffered throughout the day, I watched fellow randonneur Tim lose his balance and tip spectacularly onto his back, his wheels staring straight at the sky. “Silly townies.” I could hear the Hilly Billy laughing.

All other thoughts except what the next few feet held in store emptied from my mind. Unfortunately– or perhaps fortunately– my position on the back of the tandem didn’t allow a clear view of what lay ahead.

I had to rely on Felkerino telling me, which ended up being a 70-mile vocal recital of different combinations of “Bump! Bump! Slowing. Holy cow! Hang on! Stopping! I can’t believe we’re doing this.” 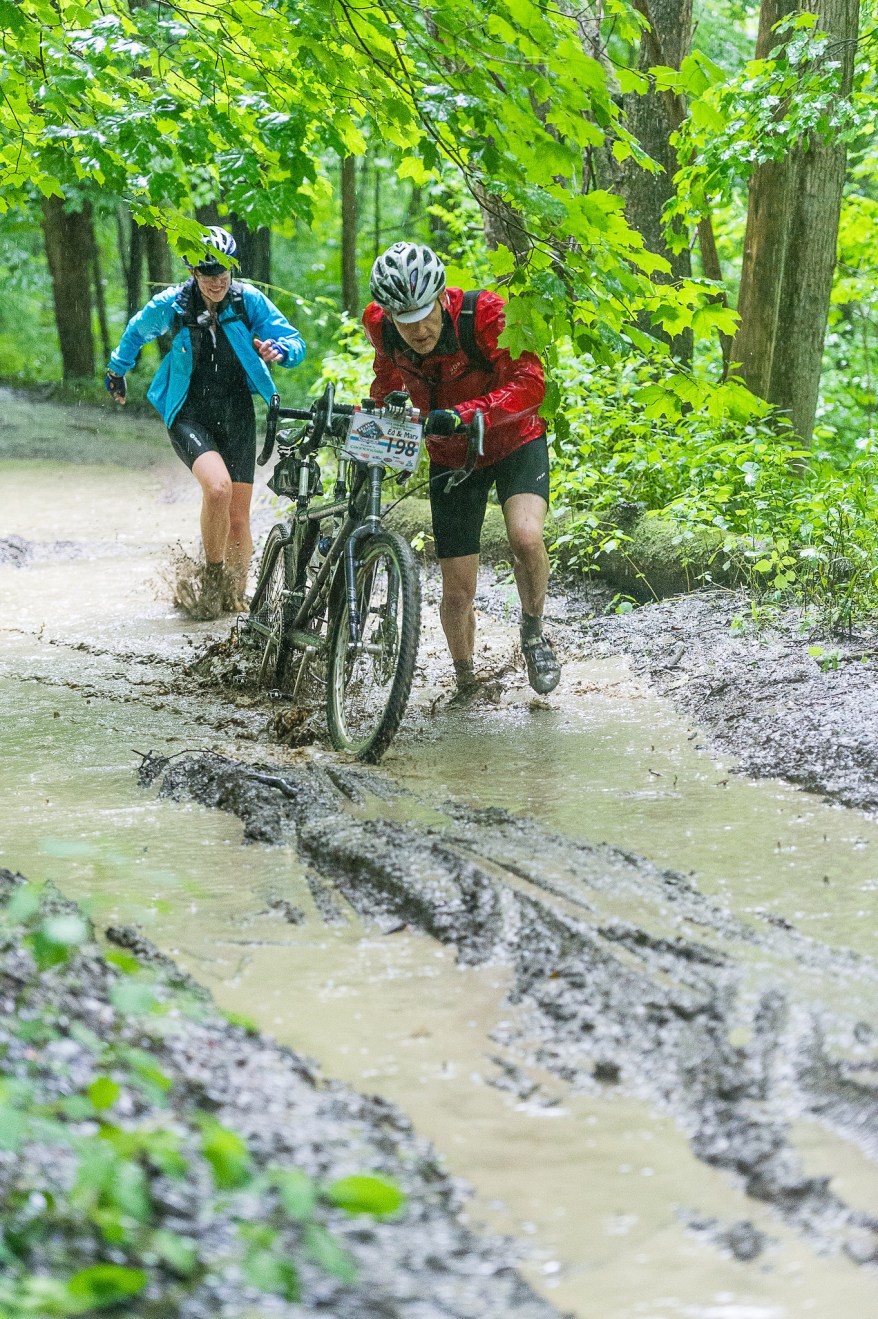 I wished I had brought my magic wand to help with the day, but in its absence I was glad Felkerino had chosen the tires he had. The Kenda Happy Medium 2.1 tires were somewhat heavy, but maintained good traction through sloppier sections.

We could never let the tandem loose on the many winding downhill segments– the surface was too soft and unpredictable for that– and the persistent braking down the steeps steadily chewed away our brake pads.

The sharp ascents and slow going on muddy segments took a toll. By the midpoint aid station, we looked to be on an 8 hour pace, and that deflated our spirits. “What are we doing?” I asked myself. “We’re just a couple of townies who ought to know better.”

I then recalled how I’d had to muster my courage just to start this year’s Hilly Billy Roubaix, knowing that the day predicted rain and that the course would have soaked up its share of water. It’s easy to ride on a sunny day in the 70s– quite another to go out when conditions are not so inviting.

Thirty-five miles in, and we were still going strong. I mean, strong, relatively speaking. We had chain sucked three times and walked a fair amount (especially on Little Indian Creek Road), but the sun was now peeking out, and we had not fallen once. I began to mentally regroup.

I pursed my lips together and focused all thought on taking home the lump of coal for the tandem category. Unless we were pulled off the course, we were going to get that lump of coal. Operation Lump of Coal was now in session.

I slurped a Coke, wiped my mouth with a gritty gloved hand, gave Felkerino a “Let’s do this” look that may still have come across as a “Why are we doing this?” look, and we took off, reenergized and determined.

The second half of the ride began to relent somewhat, enough that I found myself exclaiming “Oh it’s so pretty!” in several sections. I could feel the Hilly Billy Roubaix take a step back at that. That’s right, Hilly Billy, I think you’re pretty! Clouds began to roll in again.

We rode a mix of paved and unpaved roads to the final formidable section on Smoky Drain Road. I don’t recall the length of Smoky Drain Road, but we used our two-footed gear for it. My socks were bunching up in between all the mud in my shoes as we ran-walked and pushed the bike, but I preferred that to the perils of riding through.

I had developed a secondary goal by this point in the ride. Not only were we executing Operation Lump of Coal, but we were not going to fall down this time, as we had in previous years. I dared not speak this goal to Felkerino, because you know how those things go.

The final grassy section approached, and we slip-slided our way through it, walking only briefly, and falling zero times! Eventually the finish came into view, and relief and elation flowed through my body. I fought back tears as I heard friends yelling our names and JR announcing us on the loudspeaker as the lone tandem finishers for the third year running.

Rainbow at the finish!

For the last 7-plus hours, the Hilly Billy Roubaix had shaken everything out of me– my anxieties about riding off-road, worries from my regular life, fear of falling, and my self-consciousness as a bike rider that spends most of her time on pavement. I was left with a lump of coal, a bottle of whiskey, and a sense of catharsis.

I  was also overwhelmed by the positive comments from the people we encountered along the course, both volunteers and fellow riders. Everyone was so kind to us as we two townies from D.C. on an ill-fitting tandem stuttered our way through the ride. I used that positive energy to press me forward during times when I felt like the Hilly Billy was beyond me.

JR is a fantastic race organizer who tries to honor everyone who participates. You can ride fast or slow, as long as you make the time cut offs. JR doesn’t care. Just show up with a good attitude, respect for what you’re getting yourself into, and give it your all. 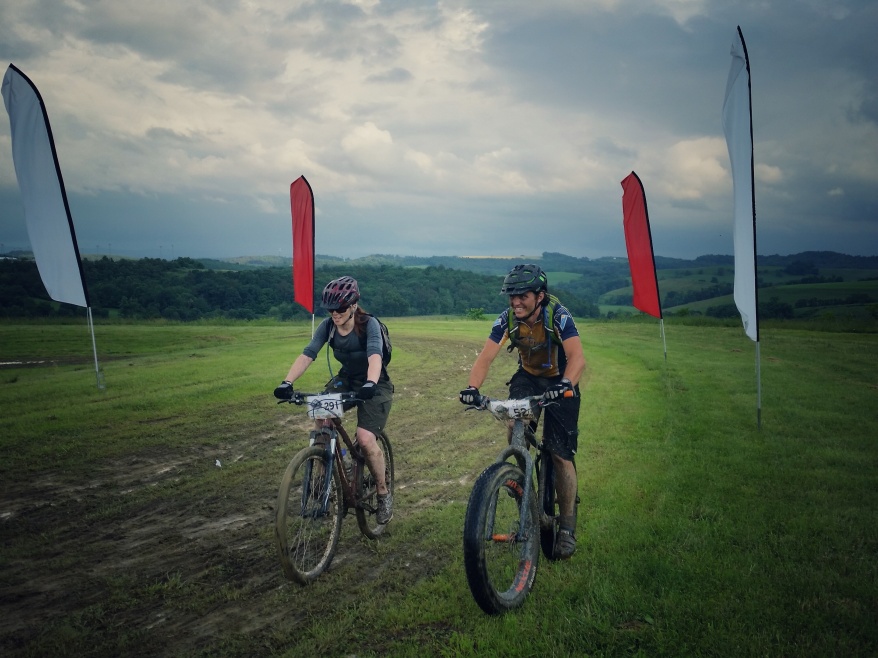 Felkerino and I hung out together at the end for a while, chatting with friends and a couple of people we met through the ride. JR came over and told us the final rider was on the last stretch; he asked if we’d head over the finish to cheer her in. JR thinks about things like that, and it’s one of many reasons we keep coming back for this event.

I may be a townie, but my crush on the Hilly Billy Roubaix is not subsiding. We’ll be back. Many thanks to JR and the volunteers who make this race possible.