As I recently wrote, I began using Strava this year as part of the Freezing Saddles challenge.  So far, I have really enjoyed using it as a training log. I know Strava can do more than serve as a virtual log and space for kudos (although I will never tire of kudos!), but those other features are not as readily apparent.

Eric Nichols – who began to dabble in the randonneuring arts three years ago, completed PBP in 2015, and currently rides with the New England Randonneurs – offered to show some of the other ways Strava can be useful to randonneurs, as well as transportation and touring cyclists.

Thanks for writing this post, Eric, and for helping me expand my own use and understanding of Strava .

I was very excited when MG recently started using Strava. As a fellow randonneur and long-time Strava user, I sometimes hear disparaging comments (often from non-Strava users) that it’s only for racers and racer wannabees. Not so!

I asked MG if I could write a guest blog about some of the features of Strava and its cousins that are perhaps less well appreciated, and especially useful for randonneurs, cyclotourists, and everyday cyclists. We, the silent majority of “Unracers”.

When Strava launched, I was an early adopter. Finally, here was a way to combine GPS ride records with performance tracking tools and interactive maps! Early on, Strava figured out how to do several things pretty well, such as integrating the social aspects of sharing your activities with your friends via following, kudos, and comments.

It’s fun to track the rides of pals all over the world, and give them a virtual “high five” for an interesting or challenging ride (or any ride at all, as MG is discovering).

The feature that Strava is most known for is segments. Segments allow you to track your performance along a defined stretch of road. You can then compare against yourself on previous attempts, and *sigh* against others. Therein lies Strava’s image problem: chasing a high standing on a segment has become the cliché that has defined Strava.

Perhaps if I were one of the gifted few who can lay down a Top 10 or KOM (King of the Mountains) at will, this would be enough. Ok, every now and then even a blind pig finds an acorn, and a gale-force tailwind propels me onto the leaderboard. That’s fun, but there’s much more to be had from the data that you and everyone else puts in Strava.

Let me start with my favorite feature, the heatmap. This combines all of your rides on a map, from any year, or for all years. Frequently ridden roads show up as a thick red line, roads ridden only once show as a thin blue line, etc.

Here’s an example showing some of my rides in 2015:

It was a good riding year.

What’s really great about the heatmap is not just that it shows your where you’ve ridden, but also where you haven’t ridden. A riding year for a typical randonneur can be divided into “riding the big rides,” and “preparing for the big rides.”

Who hasn’t gotten a little burned out training on the same old roads? The heatmap will show you if you’ve been ignoring some forgotten gems — if you’ve been in the dreaded Route Rut.

In the early days of Strava, heatmaps were available to all users, and you could see everyone else’s heatmap. If I knew a rider in my area who liked the same kinds of rides as me, I would study their heatmap to see the roads they were riding that I wasn’t. Voila, instant route idea! However, due to privacy concerns, other riders’ heatmaps are no longer viewable unless the rider chooses to share.

Strava now bundles the heatmap into its Premium package. If the Premium package isn’t for you, but you still want to make a heatmap, there are some alternatives out there.

Jonathan O’Keeffe has a free on-line Strava Multiple Ride Mapper tool that will “pull” your Strava data into an interactive heatmap. It’s a tad slow, but the heatmap is in many ways better than Strava’s. The basemap can be changed, the image quality is better, and each ride route can be clicked and viewed in Strava. Here it is showing my 2015 heatmap at a larger scale: 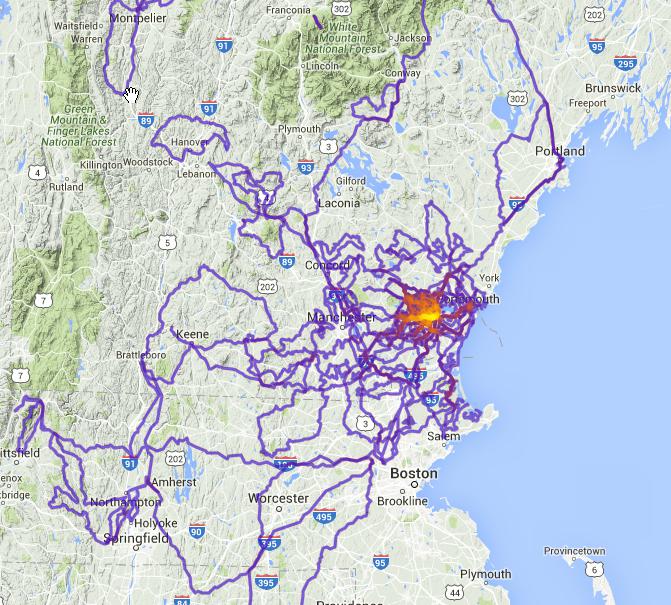 VeloViewer.com has a very good heatmap feature, along with an astonishing number of other analytical tools for your Strava data. Access to your entire Strava dataset on VeloViewer requires a subscriber fee.

There is an Explorer feature on VeloViewer that has metrics to measure how thoroughly you have covered an area with your rides. There’s even a leaderboard for that! Here’s a heatmap on VeloViewer at an even larger scale: 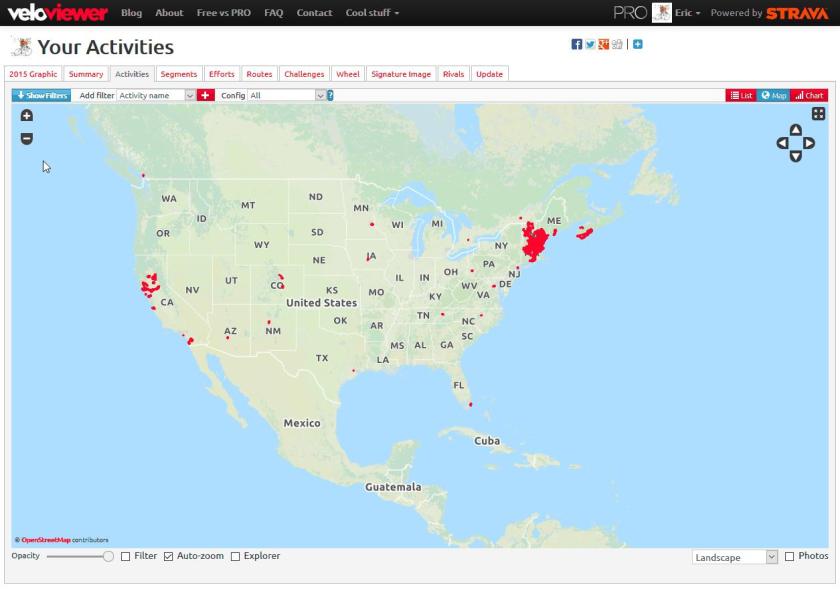 Once you’ve decided to Kick That Route Rut in the Butt, how do you successfully plan a fun new route? Strava has a route builder (still in beta), with some promising features like minimizing elevation gain, or routing on roads that are popular with other Strava users.

In terms of route planning, Strava has several competitors, including RideWithGPS, MapMyRide, and BikeRouteToaster, just to name a few.

I have a reputation among my riding pals for planning adventure rides that often result in carrying bikes through swamps, or a lively debate on whether that thin spot in the woods is actually the route.

That is another way of saying that maps aren’t always reliable indicators of the condition of a road. A map showing a transition from a solid to dashed line might be the start of a perfectly smooth dirt road like this:

Or it might be a Class VI road that hasn’t seen a wheeled vehicle since rubber tires were invented:

That leads to another Strava feature that is really useful for Unracers: The Strava Global Heatmap. This is a heatmap of everyone’s rides. If a road or trail gets ridden frequently, it’s big and bright. If it’s only been ridden a few times, it’s thin and dim.

Strava is so popular globally that there are few places left in the developed world that have not been heavily tracked by Strava users. It’s become a very reliable resource for determining where riders ride.

So shed your preconceptions about Strava, and embrace your inner data geek! Leverage all that data to the higher purpose of having more fun on your bike!

Get out. Explore. After all, isn’t exploring is just another name for randonneuring?