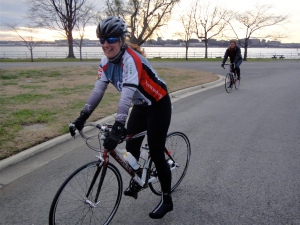 The mission of Women and Bicycles is to get more women on two wheels through mentorship and peer-to-peer learning, between those who already ride and those who would like to ride. The program consists of dinner parties, workshops, bike rides, and celebrations.

Megan, a member of the BikeDC community, organized a century ride on Hains Point to raise money and awareness for Women & Bikes on December 23. Hains Point is a well-known 3.2-mile loop located in the Southwest quadrant of Washington, D.C., and is a popular training spot for the area’s road riders.

Megan’s organizing impressed me. She encouraged people to show up and support the event, even if they did not or could not ride the full 100 miles.

I also admired her for taking on a Hains Point century. Even though Hains Point is flat, wind can blow stiffly off the water. Completing a ride as flat as Hains Point is a different kind of challenge than a rolling ride, as rolling terrain offers opportunities to use different muscle groups and easily move out of the saddle. And finally, 32 laps of Hains Point? It’s hard to fathom.

By the day of the Hains Point 100, Megan had raised more than $1,000. It appeared that a sizeable group showed up at the start and a steady stream of people came and went to support the event and complete a lap or two (or three or four) throughout the day.

Felkerino and I ventured out of the city for the majority of our Sunday ride, but stopped by Hains Point in the later afternoon to do a couple of laps and observe the event’s finale.  We had a great time, meeting and greeting several people we know from the Twitterverse, Friday Coffee Club, and even D.C. Randonneurs.

We encountered our friend Ben B., who is now one of the co-owners of Proteus Bicycles in College Park.  Ben had pedaled down to the event from College Park, Maryland, riding a recently-acquired bright yellow tall bike.

We rode together for a partial lap, and then Ben departed to get in some last-minute shopping at the Downtown Holiday Market. I wasn’t sure how that big beast locked to a rack, but Ben was carrying an Abus chain lock and seemed to have it all figured out. 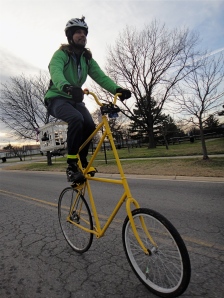 We finally met Alex B. (straight out of Twitter and into real life!), who is a recent addition to the WABA staff. Alex was riding her sparkly new Wabi single speed. 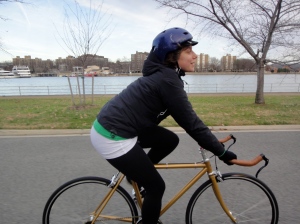 Alex on her new Wabi

Kate C., also known as Girl on a Bike, was out riding her trusty cruiser bike, Betty. Betty was all decked out for the season, including lights, tinsel, and a Christmas stocking. Both Alex and Kate completed more than 50 miles for the day. Well done, ladies. 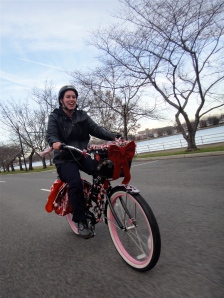 Friday Coffee Club friends Pete B. and Aaron were there, too. Pete had decided to combine the Hains Point 100 into his fixed gear double-century ride. He’d been up since 3 a.m. Sheesh! 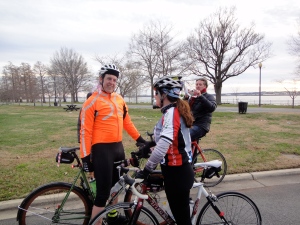 Pete B. and Megan

Aaron also rolled well into the triple digits, leaving Hains Point with over 117 miles in the bank.

Kathy, an Arlington-based commuter, provided support to Megan and other riders throughout the day. She did a great job, and her positive energy and smile were completely infectious. 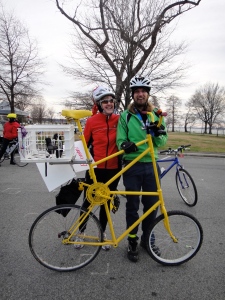 Nelle P., also on the WABA staff and an avid bicyclist, was also there, having just installed a new set of handlebars on her Raleigh the night before. 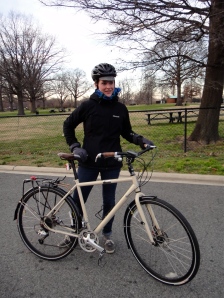 Nelle and her Raleigh

The most exciting moment of the day arrived when Megan put her foot down after meeting her self-imposed challenge of 100 miles– 102 when all was said and done. 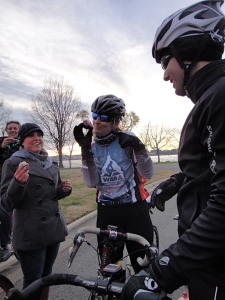 She had done it! Megan rode thirty-two laps around Hains Point. She raised money and awareness for WABA’s Women & Bicycles initiative. And most important, she led by example. Thank you, Megan.

P.S. A few more photos from the day are here, and Felkerino took some photos too.

Note: I previously (mis)identified Megan as WABA staff. She is not a WABA employee, but rather a regular everyday citizen who put the ride together.