Last summer, our friend Jerry spent 9 weeks bike touring 9,300 km across the United States and parts of Canada. I talked with Jerry a few times about his tour – once before he left, once while he was in the midst of his ride, and again after he finished. He also shared snapshots of his cross-country adventure on his Instagram feed.

One of the questions people most frequently asked after reading these interviews was how Jerry managed to travel with so little, but fully self-contained. In this post, Jerry talks about his method and motivations for traveling light, including a kit list for those who may be interested in trying a similar touring method. Thanks for giving us an inside look at your traveling system, Jerry!

The Benefits of Traveling Light

I rode 9,300 km from Prudhoe Bay, Alaska to Washington, D.C. with front panniers, a handlebar bag and a saddle bag. Most people I met were surprised by how little I was carrying, but it didn’t really occur to me to take anything more.

Traveling light has a number of benefits. The obvious one is that you can travel faster. I rode an average of about 150km a day, which I couldn’t have done with the “usual” touring set up.

On occasion I win the admiration of my fellow cyclotourists, which my vanity appreciates. They say I’m heroic for traveling with so little. I think they’re heroic for hauling such heavy bags all the way across the continent.

I can’t say exactly when I started traveling light; the removal of clutter from my life is a gradual and on-going process. I’ve moved around a lot in my life and I think I learnt to pare down somewhere along the way.

I do activities like backcountry skiing and carrying your own stuff for three weeks across a glacier helps you figure out what’s essential and what’s dead weight. I also have amateur interest in minimalism.

My bags and gear weigh about nine kilograms. When I’m contemplating whether to pack an item I don’t say to myself, “it doesn’t weight much.” Rather, I ask whether I really need it. Lots of light items add up to a heavy bag – you’d be surprised.

Below is my full kit list, and I’ve put together a full chart version, including links to some of the items I used, here.

I try to have multiple uses for things. My off-bike clothes are suitable for cycling and when it’s cold I’m wearing everything I have. My cooking pot is also a mug. My bike light is my flashlight for nighttime reading in the tent.

There are quite a few things I cut back on. I leave half of my tent pegs behind. A bottle of iodine is lighter than a water filter for the few occasions when I need to treat water.

I don’t take a third water bottle since there would be a temptation to fill it and add weight to the bike. I don’t have spare underwear.

There is a lot of good lightweight gear available these days. My tent weighs 750 grams, the same as a full water bottle.

My sleeping mat is three-quarters length and I use my jacket to pad my feet. My sleeping bag is down and packs up small.

My towel is the size of a face cloth and wrings out dry. I have a Jetboil stove which is light and fuel-efficient.

My Rapha winter jersey is one of my favorite items. It’s light, warm and looks respectable off the bike. My cycling jersey, t-shirt and hat are merino wool, too. They are comfortable to wear and feel clean long after they aren’t.

I bought Swrve lightweight trousers for the trip and am very happy with them. They are cut slim, have a little stretch in them and are good for wearing on the bike and in the evening.

There is a system to the packing. The left pannier is for sleeping bag and clothes. Everything’s nice and clean in there. The right bag is for sleeping mat, tent, cooking equipment and food. It can get a little wet and musty in there. 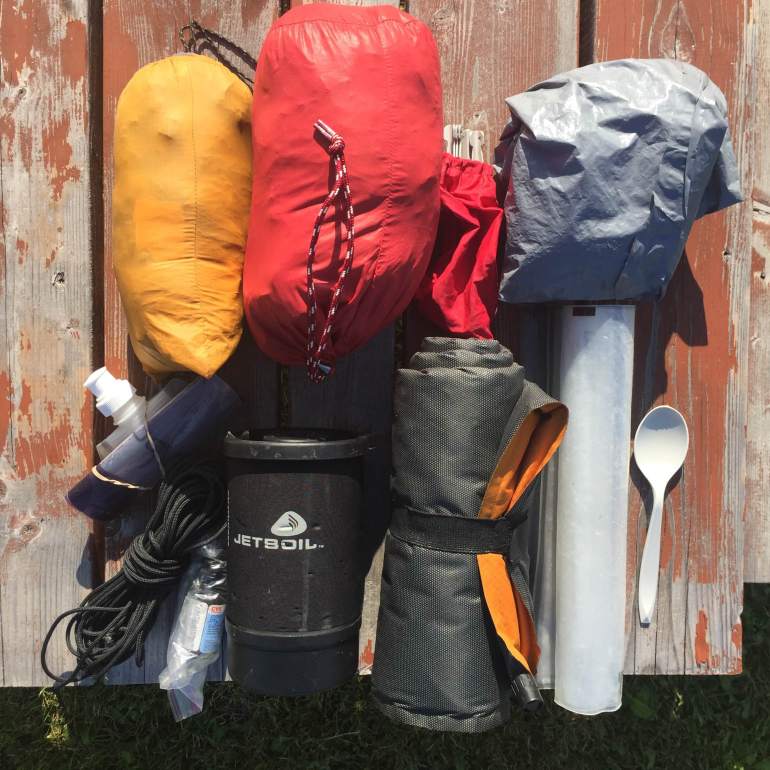 The handlebar bag is day food, phone, Kindle, sunblock, wash kit, cue sheets and odds and ends in general. The saddle bag is for bike tools and spares, waterproof jacket and reflective vest. I strap the tent poles and spare spokes to the top tube.

My bags are all Ortlieb, so solidly waterproof. The panniers are the small ones. Carrying the large ones would tempt me to carry too much. I removed the cloth insert (pocket) to save weight. I also removed the clip that holds the bag to the rack, using elastic cord instead. This holds the bag more securely and saves weight.

Traveling light does requires an adjustment of mindset, and it might not be for everyone. Expect to wash out your clothes and put them on damp because they’re the only ones you have. Learn to love spending time in your cycling shoes, whether you’re on the bike or not. 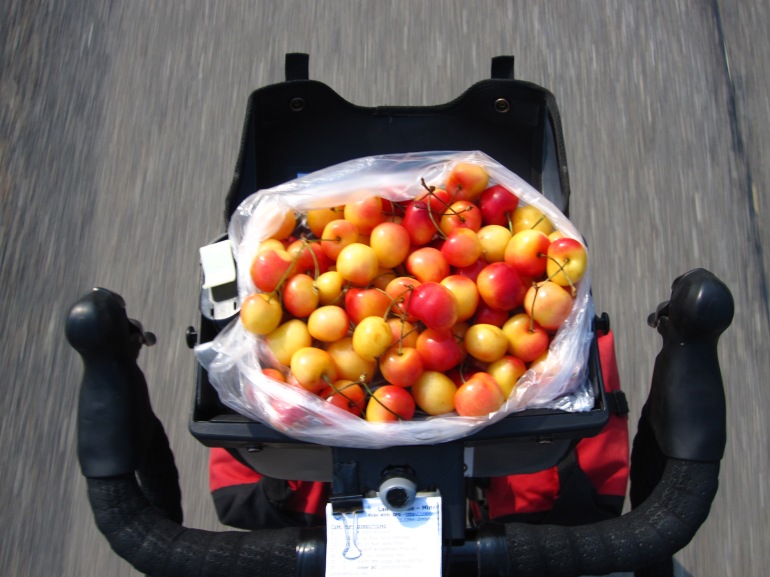 Buy small amounts of food often. Get used to cooking in a small pot. Some of these things are a little uncomfortable, but I prefer this to hauling heavy bags.

Carrying smaller bags allows you to put all the weight on the front of the bike and I should say a word about that. Almost every cyclotourist I meet is intrigued about this.

The bike handles much better with the weight at the front and you don’t get speed wobble. You can get out of the saddle and crank up a hill without the rear end of the bike flopping from side to side.

Less weight on the back reduces the risk of broken spokes. You can lift the front wheel to negotiate surprise potholes rather than just closing your eyes, powerless, as your rear wheel slams into the hole. I’m told front panniers are more aerodynamic too.

These are my reflections on travelling light. If you’re interested in paring down for your next tour, it would make me happy to know that these thoughts have helped. Have a good ride and see you down the road!