Yowza! The utilitaire deadline is almost upon us. Participants have until this Friday (March 16) to complete their 12 utilitaires so we are truly in the final throes of the challenge.

Lots has been happening while I’ve been away, and I’ve already received four utilitaire control cards for validation. I look forward to receiving several more in the coming days. 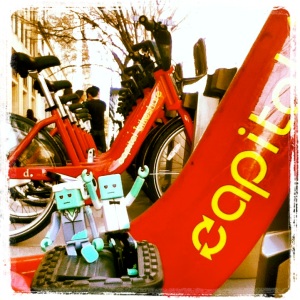 In the meantime, here’s a summary of what’s been going on in the land of the utilitaires.

That’s the summary. As always, if I missed anything, please feel free to add it into the comments. Thanks to everybody who’s been participating. Can’t wait to see the other people who’ve been doing the challenge sans blog postings!

UPDATE! I forgot Chesapeake Sailor!!  What’s he been up to? A 57-mile utilitaire to the tailor (!) and a trip to the grocery store that involved a lot of pedestrian and bike traffic, due to the nice weather.