Grant Petersen’s Just Ride, the Rivendell Reader & an E-Less Stanza of “The Raven”

Grant Petersen, of Rivendell Bicycle Works, appeared at College Park Bicycles last night to talk about his book, Just Ride. I had a great time seeing familiar faces of the #BikeDC community AND meeting the man behind Rivendell Bicycles. Woo!

I won’t rehash the evening too much, as I think he covers much of the material he talked about with us in his book.

Surprisingly, I found Grant to be quite gracious, friendly, and relaxed. I had worried that the opionated nature I saw in some of his writing might translate into a formidable bike guy. Not true. Thank you, Grant, for visiting our area AND for talking to me despite the fact that I was wearing Sidis! 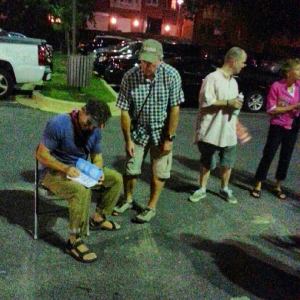 After discussing the evolution of his book, themes Grant touched on included:

At least, that is my abbreviated version of the evening’s topics. 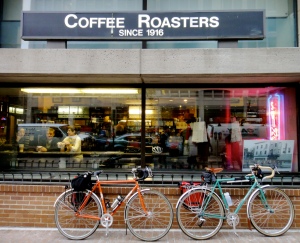 Grant’s appearance reminded me of several Rivendell Readers back when he discussed the prevalence of the letter “e” in our vocabulary and invited people to submit e-less stanzas of Edgar Allen Poe’s poem, “The Raven.”

It sounded like a fun exercise and I sent in an e-less stanza I wrote. Mine did not make the cut of those that were published in the Rivendell Reader, but I did receive a nice Rivendell gift certificate that helped to offset the purchase of a Nitto Campee rack I bought from them.

Below is the original stanza (which is the third of “The Raven”) followed by my e-less version.

Tragic silky sighs from rustling curtains of dark orchid stain
Disturbing sounds do thrill my body with ’til now unknown fantastic horrors;
So that now, to halt such soul-dizzying strain, I stand continuously saying,
‘Tis a visitor wishing to pay a visit rap tap tapping at that room’s door
A nocturnal individual who prompts admission at that door;
This is all, and not a myriad of crazy thoughts that in my brain do war.

That was a fun activity. Not a bikey post, really, but certainly inspired by a bikey person.