This past Saturday, the D.C. Randonneurs ran their 300K brevet out of Warrenton, Virginia. It was my third time on this particular 300K route (although I did ride it one additional time as a no-credit “fun ride”), and I was determined to make this year a different experience than 2012.

Last year I experienced a new and awful feeling while riding– the urge to stop and go home. Upon reflection, I think a number of things contributed to this, some of which I postulated in last year’s ride report: fatigue; a rainy forecast; and an unexpected been-there-done-that sentiment toward brevets.

Regardless of the cause, though, the result was I was not mentally prepared to pedal 188 miles and it took a lot of effort to get myself back into the flow of the ride.

Memories of the negative thoughts that arose during last year’s 300K were strong in my mind as I began to ready myself for Saturday’s ride.

I spent several days mentally prepping, largely by frequently telling myself that Felkerino and I were going to have a good ride. I believe there is truth in the power of positive thinking. 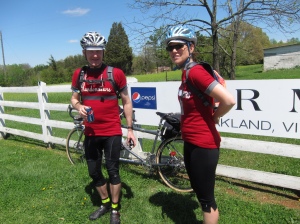 Applying the power of positive thinking at the last control. Photo by Bill Beck

I also ate well, and tried to get decent sleep the week leading up to the event. I moderated my workouts in order to have fresh legs on Saturday. I meticulously packed for the ride two days before, giving myself plenty of time to remember something I might potentially overlook and to avoid throwing things wildly into bags at the last minute.

Felkerino said that he wanted to ride steadily and minimize time off the bike. Done! I packed sandwiches for myself (one almond butter and strawberry preserves, and two hummus sandwiches) as well as a couple of Clif bars. That freed me from having to rely completely on the stores along the route.

Saturday arrived and I was ready and focused. My legs felt good (although I do still have a lingering pain in my left knee).

It was a perfect day to be a bike rider on the 300K. The day was clear with winds out of the west. As the route generally goes north to south, we avoided direct headwinds for much of the course. Humidity was low. Early morning temperatures hovered in the mid-40s and rose to the low-sixties by afternoon. 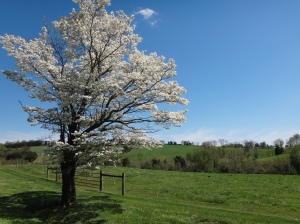 To add to the blissful conditions, the countryside was in full bloom. Apple trees had started to flower. Puffy pink cherry trees and white and pink dogwood brightened the landscape. Redbud (my favorite) contrasted beautifully with the lush green around us. Meadows of bright yellow interspersed our route. 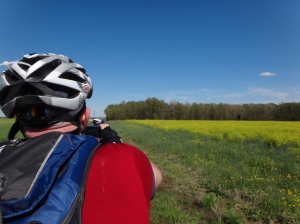 The vividly painted surroundings almost made me feel like our colder-than-normal spring had been worth it. I appreciated the mild temperatures and spring warmth that much more, and the later blooming season perfectly coincided with our brevet. 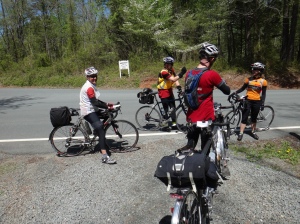 Matt, Bill, Felkerino, and Andrea on the 300K

Oh, and babies! I almost forgot the babies. We passed a mother horse with her newborn foal, saw many baby calves on our ride, and even encountered two baby goats– one of whom appeared to be escaping from its fenced-in home. 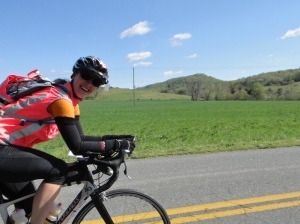 Early in the ride, Felkerino and I grouped up with Matt, a randonneur from Pennsylvania, and Andrea, of D.C. We also leap-frogged throughout the day with Bill, who took some beautiful photos of the course. That ended up being our little brevet posse, and we had good time chatting and riding the day away. 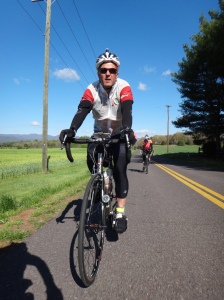 Our group rode at a comfortable pace throughout, but tried to be judicious with time off the bike. Felkerino and I generally plan to spend one hour off the bike per each century ridden when we’re doing brevets. On Saturday, we rode 188 miles and spent 90 minutes total off the bike. For Felkerino and me, that is a disciplined bike ride.

Thirteen hours and 13 minutes after rolling out of the parking lot, we returned to make our final control. Ninety minutes faster than last year’s time. Pretty good.

George Moore, who organized the brevet and had spent much of his time out along the course taking photos of riders, was there to greet us, sign our cards, and provide us pizza, cookies, and pop. Thank you, George!

As you read this report, you might think it seems boring. Maybe in some ways it is. Felkerino and I planned our ride and packed our stuff. We woke up early. We rode our bike 188 miles. The bike rode great. The course was pretty. The ride was well-organized. We took some photos. We rode with nice people.

Made it! Photo by George M.

For me, though, it was not boring. Saturday’s ride was a second chance. It was a way for me to recreate my ride experience and remind myself of the reasons why I love doing brevets.

I paid special attention to those things on Saturday: the beauty of spring rides; the solid organizing and well-thought-out routes of the D.C. Randonneurs; the fellowship of others; the joy of spending an entire day out in the country with my husband on a beautiful tandem; and the sense of accomplishment that comes from riding long.