Felkerino called our day going over Rollins Pass an immersive experience. It’s definitely one of the most intense things I’ve done on a tandem.

Close to the summit

The quick version– 37 miles from Winter Park to Rollinsville. Smooth 15 miles of road up from Winter Park. Ascent topping out at 11,700 feet. Intense two-mile haul of the tandem over the Needle’s Eye of the pass, and a raggedy bumpy 10-mile descent until intersecting with a smooth gravel road that feels like a magic carpet and zips you right to Rollinsville. 31 additional miles downhill to Boulder and The End. 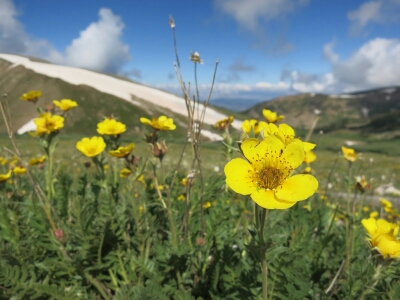 The Rollins Pass road was originally an old railroad so the grade was not as steep as we expected. The road from Winter Park up to the summit was in good condition and incredibly quiet. We saw only a couple of cars. The 15-mile climb up seemed to go fairly quickly.

Both Felkerino and I wondered what sort of terrain and difficulty awaited us at the top. We had seen videos and listened to people’s stories of the pass, but those are not the same as being there on your tandem.

We planned to avoid the old trestle bridges at the top of the pass by taking the high road. People told us we couldn’t miss it. Our eyesight must be poor because we never saw this “obvious” high road and soon we were crossing the first of the two trestles.

The trestle felt solid and, with eyes straight ahead, we had no issues getting to the other side.

Snow on the pass

Prior to the first trestle, a snowbank appeared along the slope. We hefted the tandem and ourselves through. It wasn’t pretty, but the snow was sticky and Felkerino and I managed our way without much issue. I had an abstract image of me rolling down the snow slope– it would be a soft fall, though terrifying.

The snowbank push made the trestles seem easy. Relatively smooth, they held our weight with no issues and only required walking in a straight line. No pushing. No problem. Clip clip clip and easy peasy.

I shot a few photos here, and looking them over afterwards I note I was more nervous than I knew. Almost all my photos were crooked.

During this section we encountered another rider heading up from the other side of the Needle’s Eye. He pointed us to the next hike-a-bike section and advised us not to freak out when we saw the descent on the other side.

Hiking the bike over the top

We walk/pushed the bike until the slope required us to do some controlled dragging down the steep to the other side of the pass.

Felkerino and I eased the bike through the second stone-ridden barrier bordering the Needle’s Eye. There had been one on the other side, but we had rolled the bike over it no problem. This one took more careful lifting.

Time out to empty rocks from the shoes.

By this time I was totally invigorated. This was the life. The best day ever. Riding and pushing our bike in the quiet immense beauty of the mountains.

Unfortunately the road on the Rollinsville side was not nearly was smooth as the one from Winter Park. Bumps and rocks for close to ten miles. Our Co-Motion Java’s setup was minimally suitable for this section, mainly due to our 35mm tires. Ideally, something wider would have been better.

No matter. Ride the bike you got, right?

Felkerino was dispirited by the rough road and our snail’s pace. I, on the other hand, had entered a state of bliss that nothing could intrude upon. I didn’t care how many hours it took us to return to smooth road. I wanted to soak in every view, every step, every pedal stroke. 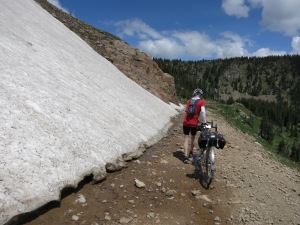 Bump thud thud. We walked and rode our way down, weaving in between the rocks. We pushed our way through another two snowy sections. Brwang! The occasional rock struck the rims. 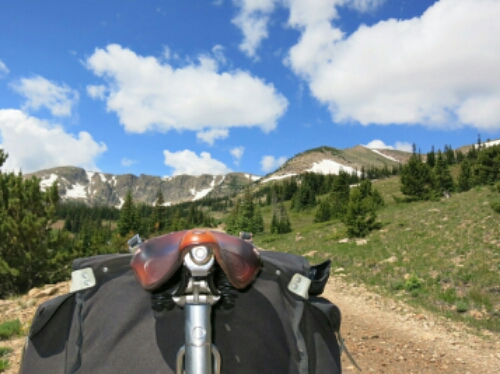 Our sturdy Co-Motion with its 35mm Clement USH tires carried us down down down. Ten miles of rough descent and we reached smooth gravel road.

We ripped down the mountain into Rollinsville. I held back tears until we stopped. We had gone somewhere by bike that I thought was impossible. We had climbed Rollins Pass together on our tandem, and it was incredible. What a way to end our Colorado tour. 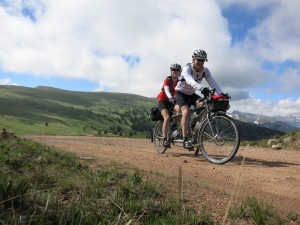 Hard, intense, immersive. Who knew an Iowa girl from flat farm country could love the mountains so much? I love our bike. I love bike touring.