For the second year in a row, Felkerino and I couldn’t get our acts together to fit in a 200K, so we began our brevet season with this weekend’s D.C. Randonneurs 300K out of Warrenton, Virginia. 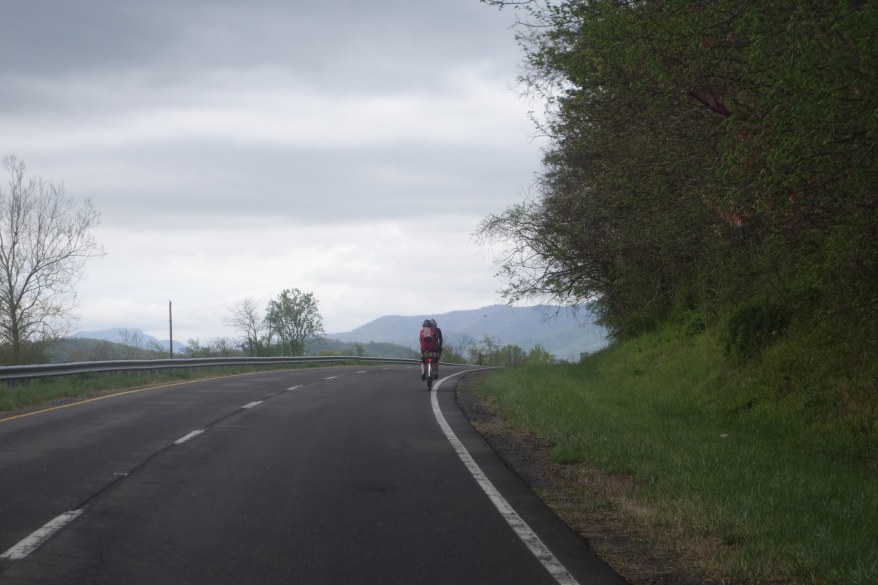 Riding toward the rain. Photo by Bill Beck

This brevet is a constantly rolling course that meanders through Virginia horse country to Gordonsville, Virginia, and back. I continue my campaign to rename this brevet the “Out of My Gordonsville 300K,” but my efforts have resulted in little traction.

I find that unfortunate, as this course suits my proposed title in many ways. First, it actually goes to Gordonsville.

Additionally, the 300K is a distance where I often experience the first twinge of tedium, á la “bored out of my Gordonsville.” It’s difficult for me to sail through a 300K, and I begin to parse the distances into manageable pieces that generally center around food/rest breaks. 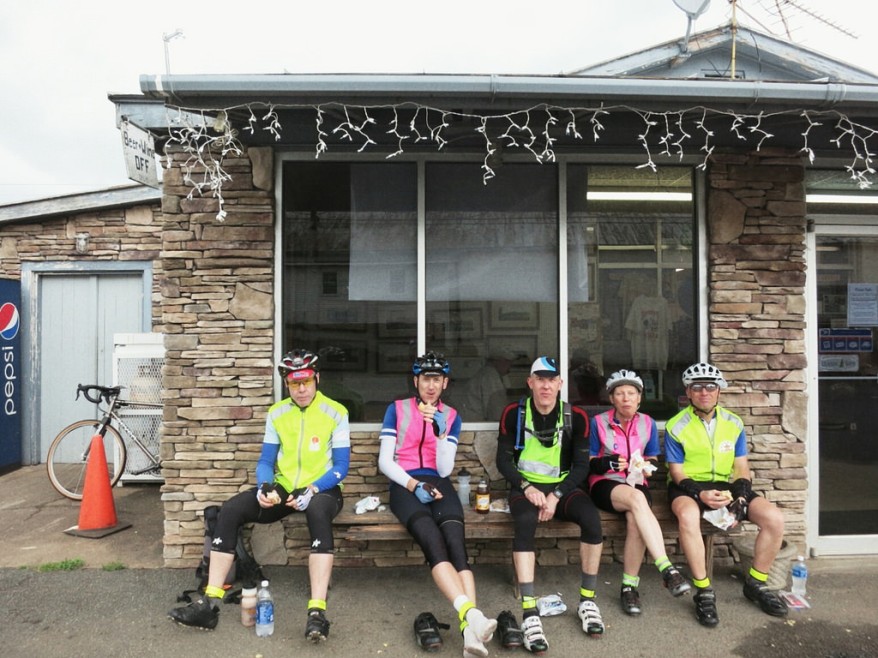 Finally, the title suits randonneuring sensibilities. “Out of My Gordonsville.” I have yet to meet a ton of people whose idea of fun is clipping in and pedaling at 5 a.m. sharp to ride almost a double-century distance.

Sure, I hear many people say “Oh, I’d love to do a ride like that.” Well, none of those people showed up this past weekend to ride with me for 300K.

Nope, it was just 23 randonneurs wandering around Virginia in search of a few signatures to verify their passage along the route, and hopes of… of what, I’m not exactly sure. Maybe that’s the appeal of a ride. You don’t know what you’re going to reap from it. 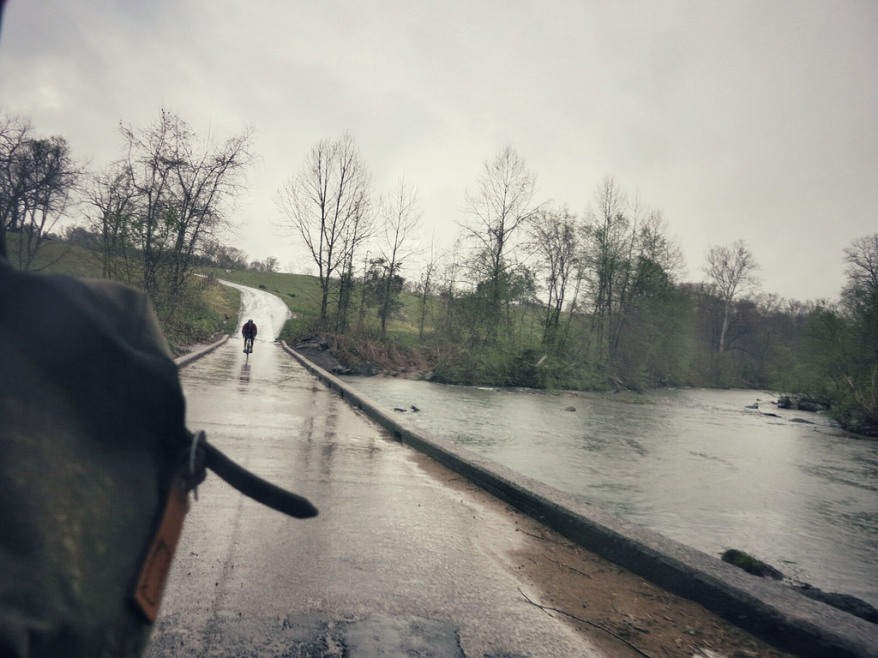 Jerry on the low water bridge

As Saturday progressed, I realized I was in search of a good ride. Because I wasn’t having a ride I considered good. It wasn’t bad, mind you. The experience just wasn’t flowing for me.

We flatted about 14 miles in, and that threw me off for a while. Naturally, the only two hours of our ride that took place in the dark made for the perfect time for a rear flat tire. It was mentally deflating to watch the taillights of the group ride away while we poked around for spare tubes and a pump.

At the same time, it was oddly pleasant to be hanging out in the pre-dawn quiet with the sleeping cows as Felkerino cast his helmet light onto the wheel to fix it. It’s a ride photo that lives in my mind.

Felkerino was quite efficient with our tire repair and we were soon on our way. Our legs were not snappy this day, but I look at our results and our overall pace was not bad. 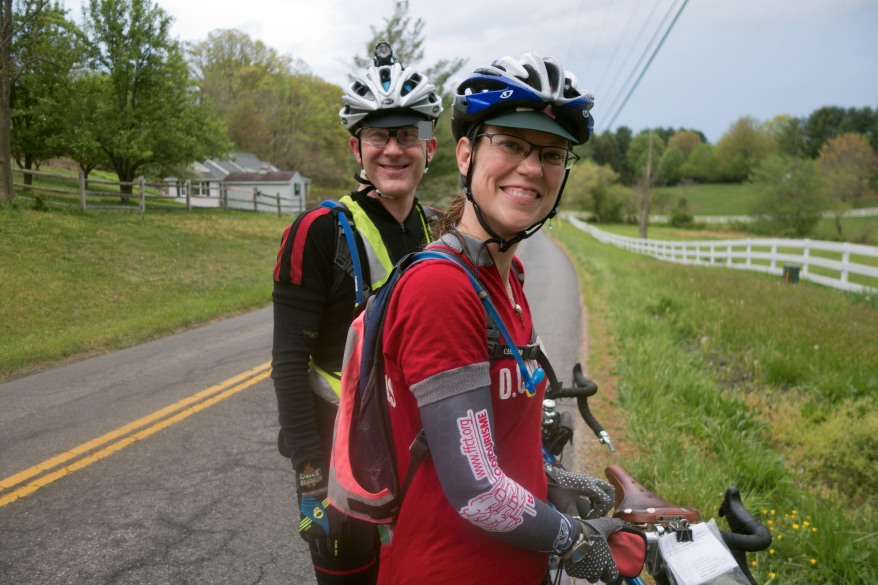 We caught up to Bill Beck and took a few photos in the peculiar pre-rain morning light. This light made everything it touched a little greener and more vivid. The clouds hovering above the mountains intimidated yet enticed us. (Bill did a find job with his photo set from the day, by the way, including a couple of my new favorites of Felkerino and me.)

Showers began, we caught up to our friend Jerry, who kept us company the remainder of the day, and then it poured on us for quite a while. The good light vanished and everything looked soupy. That was a shame, since one of my favorite parts of this ride is through the picturesque Hebron Valley, and the conditions of the day made it impossible to see it very well. 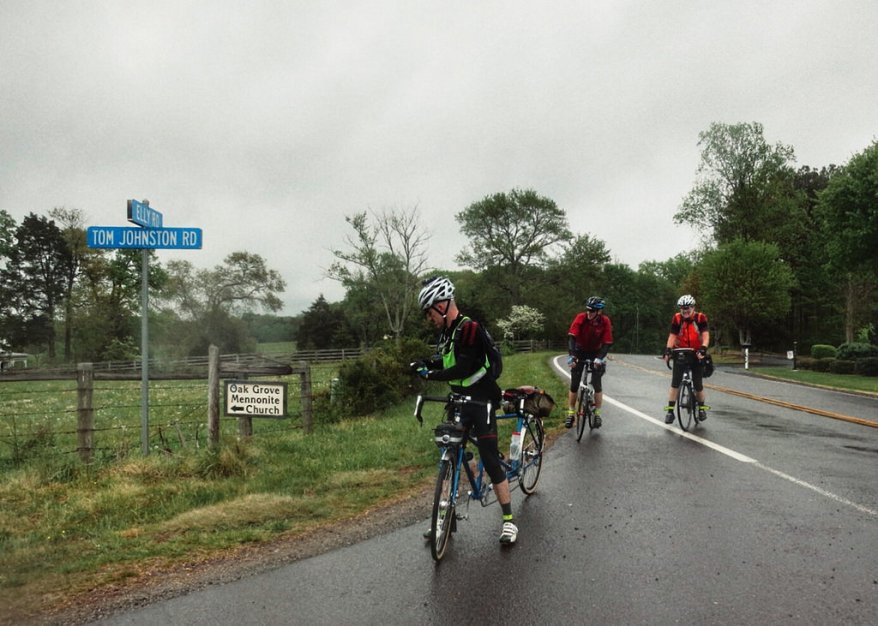 Doing stuff that randos do

Eventually the rain abated, and we were in Gordonsville. OUT OF MY GORDONSVILLE. Jerry took off his shoes, and we ate a leisurely lunch before setting out again. As Jerry said, the feel of the ride was “just average,” and for me it continued to be so until we reached the town of Orange at mile 132 of our 188-mile day. 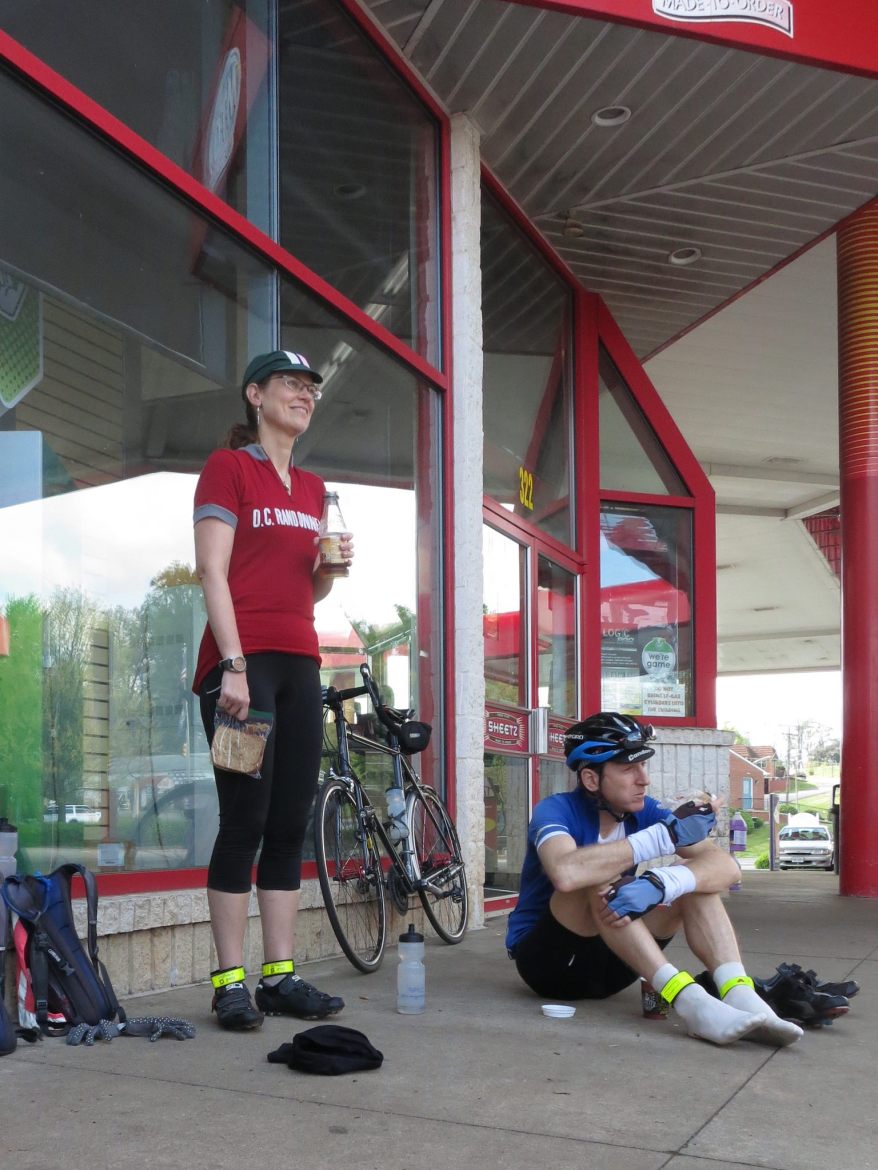 How could you not want to be a randonneur? Photo by Felkerino

After this point, the sun emerged and our ride became that good ride I’d been hoping for. The terrain swooped nicely, but not harshly, and it felt like miles were rolling away under our wheels. The golden hour came and cast its late afternoon light on the fields and towns around us. 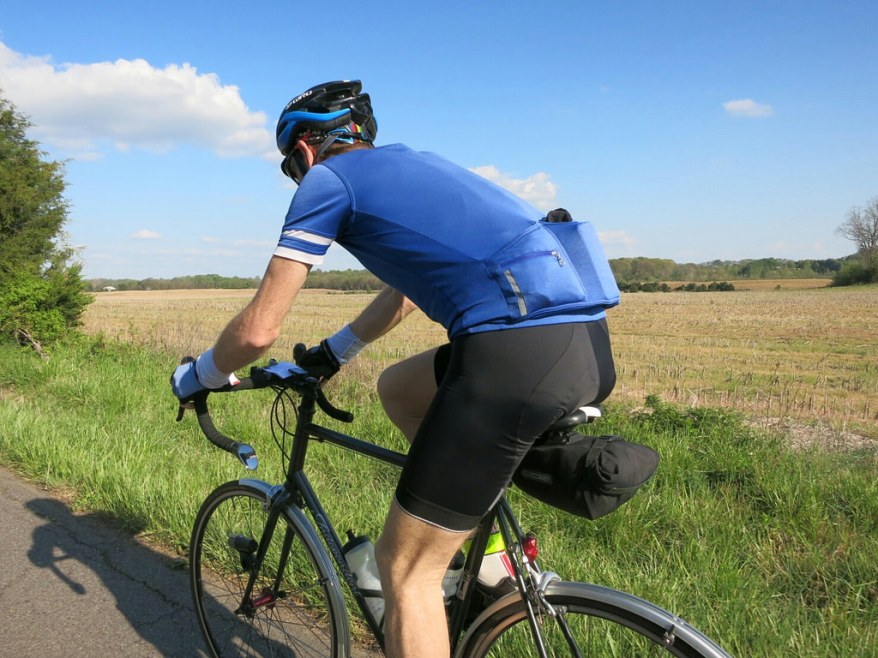 Jerry in the afternoon sunshine

No longer was I bored out of my Gordonsville, and I spent the final 50 miles fully engaged in our ride experience. Jerry, as always, was good company and Felkerino was doing a fine job leading our tandem down the road.

We finished as the last bit of light faded from the sky. The ride had taken us just over 15 hours to complete – one of our slower 300Ks, especially considering the elevation profile – but in the end I wasn’t too bothered by our time.

The late afternoon hours were my favorite segments, and after all, you’ve got to be a little out of your Gordonsville to do these rides in the first place. I rest my case. 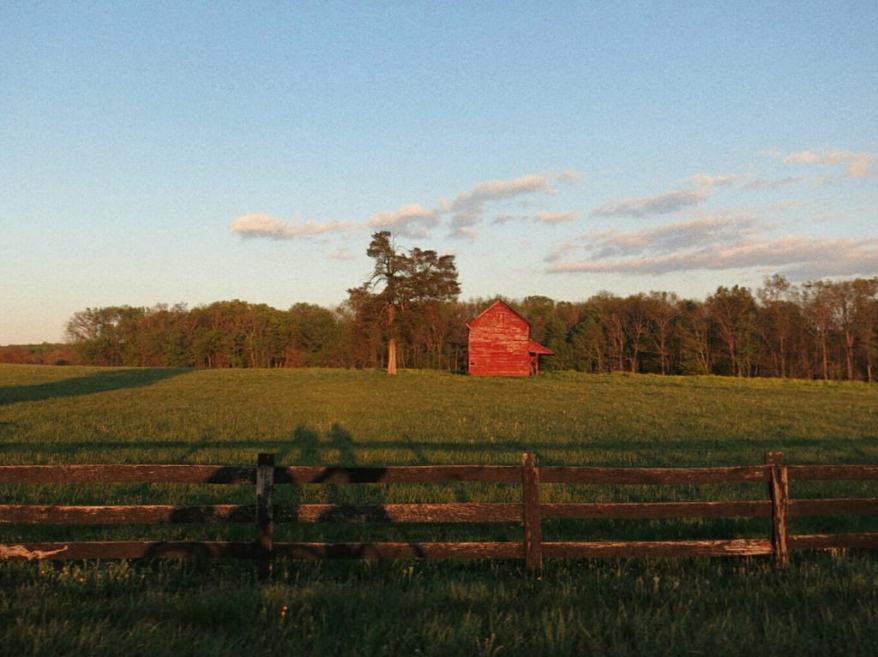 See you next time, Virginia

*Many thanks to Shab and Hamid for organizing. My pics here and Felkerino’s here.