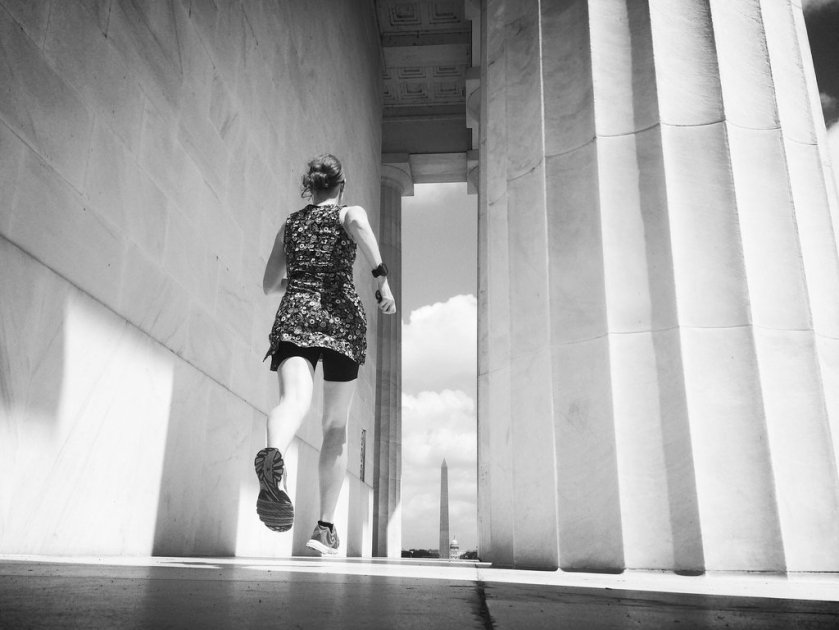 “Ma’am, are you okay?” I realize a teenage boy is talking to me.

“Yes, yes, I think so,” I answer, confused how the three boys came to be standing in front of me. Last I looked, they were several feet further down the path. I’m standing too, but a quick body check reveals that I wasn’t upright a moment ago. Blood flows out of my thumb and wrist, and my shoulder is skinned.

The kids see that I am okay, and begin to continue on their way. As they depart, one of them hands me my cell phone and says, “You messed your head up.” He doesn’t say it in a mean tone. It’s more of an observation.

My fingers reach for my forehead and touch raw skin. Swelling has begun. I wish I had had the sense to ask “What happened?” One minute I was looking at the blue sky, thinking I didn’t feel so great, and the next I’m wondering how and where I hit the ground.

Maybe a minute or two went by, I note. The same song is playing through my headphones. I don’t really need the specifics of how I fell, I suppose. I know what occurred. I passed out.

Making my way slowly home from my run, I figure I’m okay, but there’s going to be some bruising and big Band-Aids in my future for the next week or two. My thumb can’t bend fully, either, but at least it’s my right hand and it isn’t broken. (Thanks to Felkerino for patching me up.)

As I walk, I mentally assemble a personal after-action report. Having covered over 1,000 miles in the mountains over the past two weeks, I was riding a high from our trip. I felt strong and primed for a run.

While I had the fitness for such activity, Felkerino and I had spent the last two weeks in temperate weather in the mountains. Back in the city for not even a full 24 hours, it was too much for my body to suddenly switch from exertion at 60 degrees to steady effort in 90-degree heat, even though I rationalized that it was late afternoon and low humidity when I ran.

I chose a mostly shade-free route, another error. But like I said, it didn’t feel so hot when I first began running.

Additionally, I did not fuel properly, which did my blood sugar no favors. At least I had the forethought to carry water with a Nuun tablet in it. I nursed the bottle the two miles back home.

I consider myself an active person who tolerates heat well, but intellectually I know that no matter how hearty a person is, the body needs time to adjust to temperature changes.

Since we’d only been out of the D.C. area for two weeks, I thought I would be okay. Nothing to worry about. I hope I’ve learned my lesson.

My other takeaway from this experience is that you never know who will help you. I’m grateful to those teenagers for coming over to a complete stranger to see if I was okay. Their kindness meant a great deal to me.