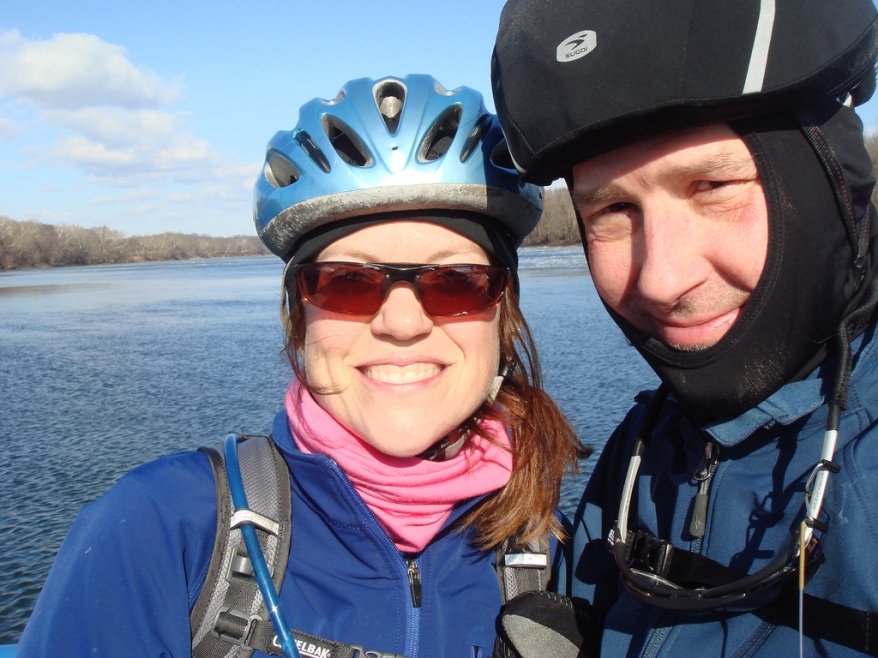 Our neck of the woods did not receive much snow this year, making January a rideable month. We did have below-average temperatures, though, so some rides were chilly. These two shots are from a sub-freezing sunny century Felkerino and I did in early January. My ankles felt so cold that I thought they could possibly shatter if you tapped on them hard enough. Crossing the Ferry that January day was beautiful, though. The bright sun, the ice on the river, and the determination to not let the cold keep us inside made for a fun ride.

Capital Bikeshare has really had a positive effect on our city. More people are riding bikes than I have ever seen. Also, the city has Bikeshare stations in places where Metro doesn’t reach.

This shot was taken as Felkerino and I rode home after seeing Robert Plant and the Band of Joy at D.A.R. Constitution Hall. While there is no Metro line outside of D.A.R., there is a CaBi stop. Felkerino and I pulled out a couple of bikes and rode to the stop nearest our house. Cheaper than a cab ride, and faster than Metro. Capital Bikeshare is a brilliant addition to Washington, D.C.

March marked the start of the brevet season for Felkerino and me. This is a shot of the D.C. Randonneurs 200K out of Urbana, Maryland. While the picture is blurry, I like several things about it. I like the energy of the 200K starts. They start at a civilized hour, people share hellos, warm up, and then sort into their various paces.

This is also the first time I met Ritchie, who is riding the Astro Daimler. When I first saw him, I thought maybe he had stepped out of a time machine just to do the brevet. I think it was the combination of his bike and way he slung his camera case over his shoulder. Dave G. is behind him, riding a Vanilla.

Felkerino and I have ridden with some lovely people over the years. This year, we shared some great big bicycling adventures with Lane and Alec. Some of the laughs were shared on brevets and others happened on nondonneuring rides. I can’t imagine my 2011 without these two. Thanks, guys. 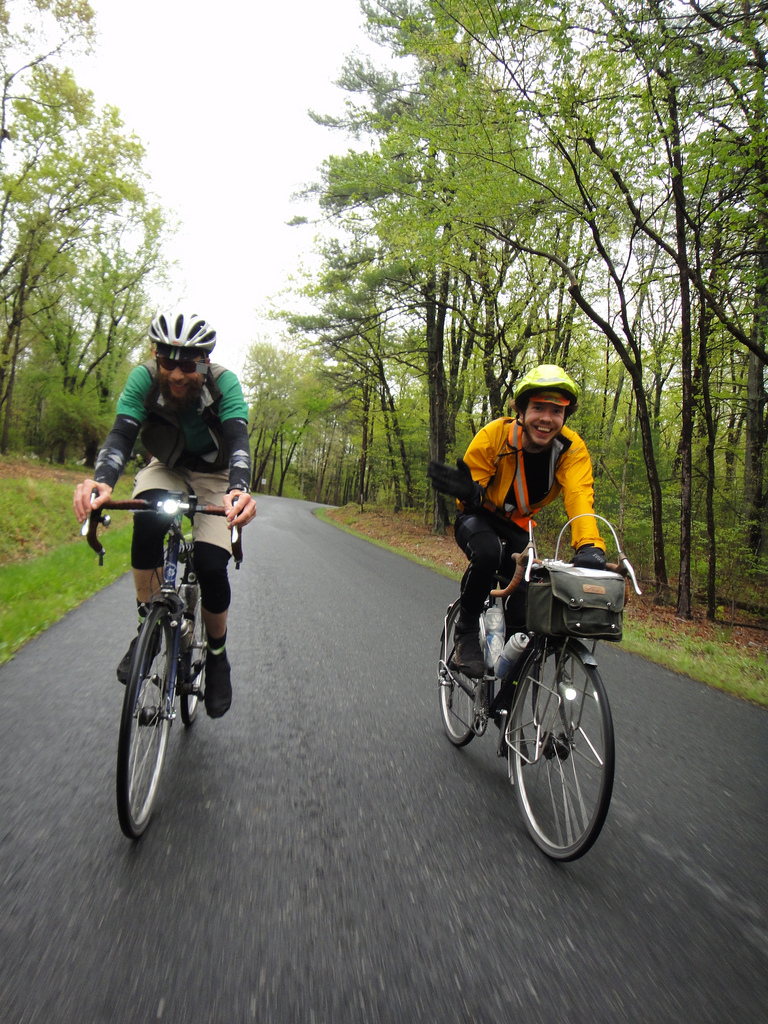 Much as I loathe getting up at 3:00 a.m. or earlier, there is something cool about the 4 and 5:00 a.m. brevet starts. I spend the morning getting my stuff organized, looking at who showed up for the ride, putting my reflective stuff on, perusing the bikes, saying hi to familiar faces, and meeting other riders for the first time.

May – The Early Mornings Continue

Just before the start, we pause as a group, listen to the announcements the ride organizer (which have to be in a voice that everyone can hear, but isn’t so loud as to awaken the “regular” people), pedal out of the parking lot, wake up, and watch the sunrise.

In 2011 Felkerino and I began to use our bikes even more for utility cycling, thanks in part to this Burley trailer. We have had this trailer for a few years, but finally decided to set it up with the Bridgestone MB-4 that one of our friends gave us.

Thanks to the Burley, we can go on big grocery runs and haul things like bike frames around. The trailer has proven transformative in making us even less dependent on a car or even Metro.

During July, Felkerino and I planned a two-day, 322-mile tuneup ride that passed Rockfish Gap and Humpback Rocks. We hope to tour the full Parkway some day, but for now, these small doses will have to do. This picture was taken on the Parkway as we climbed from Rockfish Gap up to Humpback Rocks. It had started raining and soon after some lightning was thrown around, too. 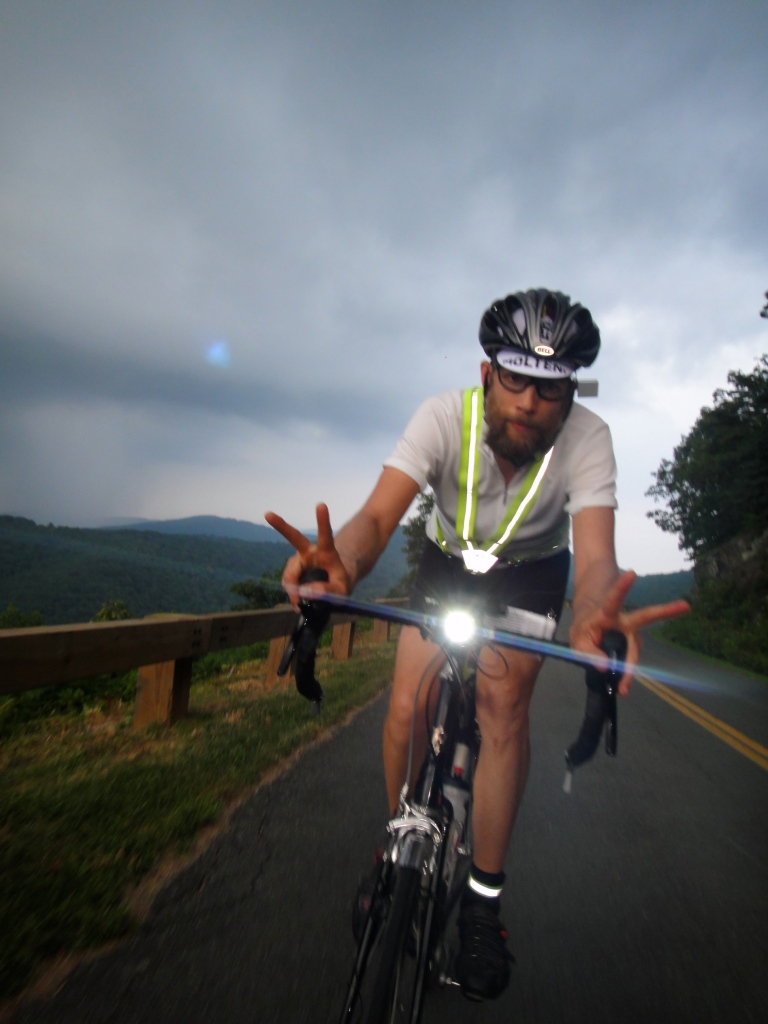 July – Riding in Rain on the Blue Ridge Parkway

This section of the Parkway is stunning, as you get thrilling views of the terrain below. This day it was also intimidating, as there was really nowhere for us to seek shelter from the thunderstorm rolling through. We pedaled on, enthralled by nature’s beauty, fueled by the desire to put some distance between us and the weather, and to reach our overnight stop.

I already wrote about PBP and its significance to this year’s cycling, but I didn’t mention the fun we had ticking off the miles with Jon Gardner. 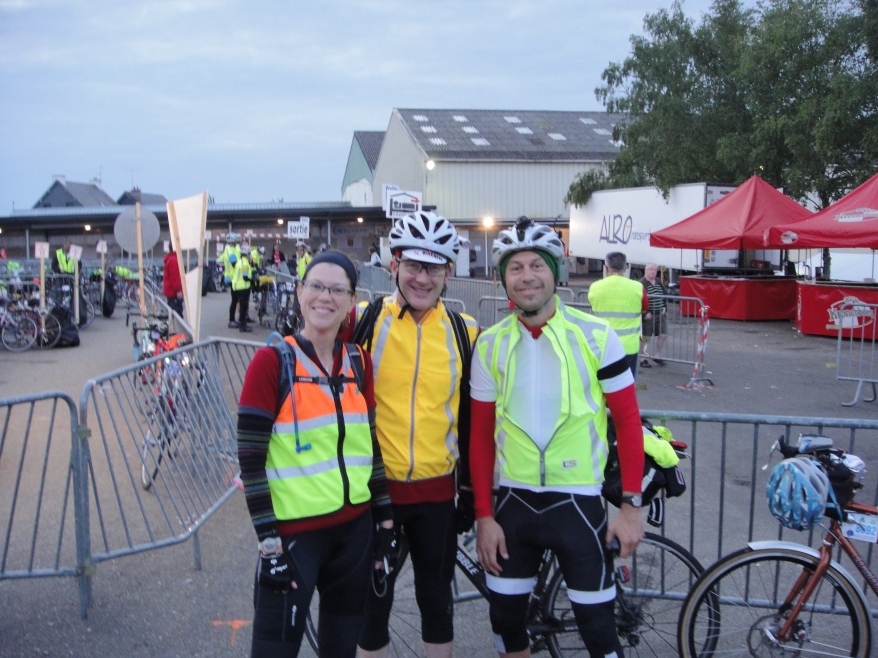 August – Day 3 on PBP, with Felkerino and Jon.

His seemingly endless energy and good humor made PBP just that much better. I also like this photo because Day 3 of PBP was such a gorgeous day, full of sun, and we all were in such good moods as we had passed the halfway point of the ride the day before. It was a perfect day to ride.

After PBP, I ratcheted way back on the mileage and signed up for the 50 States Ride, which is put on by the Washington Area Bicycling Association. Fellow blogger and commuter Rootchopper also participated (and did all of it, not the 40-state version I completed). I really like the 50 States Ride, provided I can do it on my own terms, that is, take shortcuts and alternative routes when I feel like it.

Felkerino took this picture of Rootchopper and me just before the ride start. In 2011 I’ve met several cyclists, commuters, and bloggers through writing Chasing Mailboxes. That’s been a real treat.

This fall was also all about the single speeds. Felkerino purchased and built up a SimpleOne frame from Rivendell. He meticulously researched and subsequently purchased the perfect bags for it, and started riding it everywhere. I accompanied him on my Quickbeam, which does not have such a meticulous setup, but has a couple of good non-matching bags on it. We both love our Rivendell single speeds. No thinking required, except for the steering and braking part, and they fit us perfectly.

November was all about the Rawland dSogn. I took my Rawland out on some bumpy rides down the C&O Canal Towpath. We are so lucky to have the C&O. You ride a few miles and suddenly it’s difficult to tell that you actually live in a hustling asphalt-filled city.

The Rawland was made for dirt, and with the disc brakes, it doesn’t even get that dirty. Felkerino and I also met up with fellow D.C. Randonneurs Chuck, Crista, and George to ride a dirt road populaire for which the Rawlands were perfect. I like this shot, which was taken by Felkerino, because of the way the road you can see the road stretching out. Roads like that are so pretty (or intimidating!). We enjoyed being on our “fat tire” bikes that day.

Did you think I could let a whole year pass without some love for the panda shot? Impossible!

I took panda shots throughout the year, but this pre-work danger panda practice session is one of my favorites.

And that’s it. My year in review in three parts is finally concluded. Thanks for taking the virtual trip through the year with me. Happy New Year, everyone!