Felkerino and I co-wrote a short piece about what it meant for us to complete this past August’s Paris-Brest-Paris by tandem. It was published in the most recent edition of American Randonneur, the quarterly newsletter distributed by Randonneurs USA.

Randonneurs USA members may have already seen the article, but for those who have not, I’ve included it here.

We were quite flattered last fall when Mike Dayton, editor of American Randonneur, asked MG and me to write a joint article on our tandem ride at the Paris-Brest-Paris 1200K randonnee last August.

The article came out this month (thanks Mike!) and we’re able to re-publish it here at TDR.

On the road at Paris-Brest-Paris. Courtesy Michael Hansmann.

I had ridden PBP before on a single bike, but not on tandem. This was MG’s first PBP, so for both of us it was a new experience. Riding on tandem at PBP was an absolute blast, even during the difficult parts. We always had each other and lots of company along the way, and the French showered us with hospitality.

At one point on the last day my face hurt from laughing so much at the antics and jokes of our pals! The fun lasted all the way to the finish, offsetting our aches and sore spots.

We’ve enjoyed all the stories we have read about PBP. The course is the same but everyone’s experience is different, reflecting their own goals, challenges and circumstances. It was an honor to be part of the grande dame of randonneuring with our D.C. pals and riders from all over the world.

Thanks for reading and have a great week!

Our Paris-Brest-Paris 2011 by Tandem
by MG and Felkerino

This year we rode our first Paris-Brest-Paris together on our Co-Motion tandem bike. We’ve been riding brevets for a few years now on tandem and previously completed two multi-day randonnees, so we were not new to tandem randonneuring.

Yet, PBP is the big show, with more than 5,000 randonneurs from all parts of the world participating, and all the pressures that come from a major time and money commitment.

This was Mary’s first PBP, so everything about the ride was new to her. It was Ed’s fourth, yet completing it on a tandem made it feel like a whole new PBP. Both of us were more than thrilled to have completed PBP on tandem, together. Here are a few of the reasons why — and a few of the challenges we had to overcome.

We were the only American tandem team to choose the 84-hour time limit. As a tandem we got to start 15 minutes earlier than the single bikes, at 4:45 a.m., in a group of other tandems, trikes, velomobiles and recumbents. The 84-hour group is already the smallest, and our special bikes group smaller still — a few dozen in all. We enjoyed a stress-free ride out into the French countryside with a French tandem couple as our main companions, and then rode alone for another hour before the single bikes started overtaking us.

After four years, ready to go.

A rather mellow scene for the 84-hour special bikes.

The conventional wisdom at PBP is that you save energy by riding in the big groups that form along the way. Ha! We tried to stick with a fast bunch early on the first day for a few kilometers, only to find out that our momentum was totally out of sync with packs that take up all of the lane and more. After a scary moment trying to avoid crashing into the riders slowing on a hill, we realized that PBP was no place to draft on a tandem. 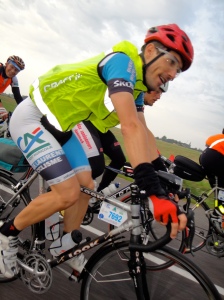 3. A tandem is the ultimate defense against bad weather.

When the big downpours hit us on the first day and evening, we knew that the tandem’s weight and momentum would allow us to plow through water and wind. We put down our heads and pedaled hard, pulling riders along the way behind us. The roads drained well and we just kept going, saving valuable time that would come in handy later.

It always rains some at PBP. We got a ton on the first day. Courtesy MG.

First, we had each other to while away the hours together — the very best thing about tandem randonneuring. But we also “met” a lot of folks who figured the tandem would provide a good pull down the road. Our friend Jon Gardner was our constant companion throughout and protected our rear wheel, but that didn’t stop many others from settling in behind for a segment here and there.

We spent our second day with a French rider, Guy Soudiere, who spoke as little English as we spoke French, but despite the language issues we formed a solid foursome. We also scooped up fellow Americans Jeff Bauer, Rob Hawks and others we knew from past rides but don’t get to see very often. If you like company, ride a tandem.

Jon G. kept the mood light and the drafters back.

Guy Soudiere, our companion for most of Day 2. Courtesy MG.

An eight-foot long bike with two riders aboard, as you’d expect, rockets downhill and then slows on the uphills. That fact meant we needed a lot of running room on a descent or flat and we’re going to block the road a little on the uphills — often with riders trailing close behind.

Fortunately the 84-hour group represented the tail end of the event until the third day, when we started mixing in with some 90-hour riders, and there were not many groups to navigate around. Still, we got a lot of practice overtaking riders, giving them a clear “a gauche” as we approached, and backing off if we’d have to cross the center line.

6. You have your partner to share the highs — and the lows.

During an event as long as PBP, there are going to be times when one would rather lie down and sleep than get keep pedaling. One time for us was the return segment from Villaines to Mortagne.

We had arrived in Villaines in the early evening to a giant international randonneur festival, where the wonderful townspeople and volunteers gave us a huge lift. 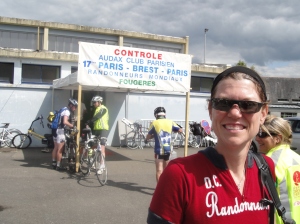 But as night fell and we charged off toward Mortagne, the hills started to feel like mountains and Ed was suffering a little from sleep deprivation and an aching Achilles tendon. A couple of talkative riders felt we’d make a good audience for their views on politics and their life stories, which is mostly OK, except they would not pay attention and ended up blocking our momentum on the descents.

Mary shared those frustrations, but wasn’t experiencing the same pain or irritation. She helped things calm during this stretch, basically by telling me not to freak out. We arrived in Mortagne and did not lose our cool along the way. Helping each other through the highs and lows makes all the difference between enduring and enjoying the experience.

Let’s face it, people are fascinated by tandems. They’re eye-catching. Kids think they are neat. People are curious about what it takes to ride together on the same bike. Tandems are a great conversation starter. Many times we would get an appreciative wave from a passing car or a heartfelt “courage!” as we passed through a town. You’re a bit of a parade on a tandem to begin with, and riding one at PBP takes that to a new level.

We enjoyed the atmosphere at controls, and fed off the attention we got as a tandem couple. The French love cycling, they love romance, and the tandem combines both — provided you smile and avoid “tandem team meetings.” We did our best to return the love at the controls and felt better every time we rode on.

8. Tandems set their own pace. Sometimes you go slower, but other times you will go faster. It’s all OK.

On a tandem, if one person needs to stop, both people stop. Even if one person feels great and wants to push the pedals, if your partner needs to take it easy, you’re probably going to take it easy. When Ed developed an Achilles problem we had to ratchet back our pace over the last 500K to what his body could withstand and roll easily into the finish. I wanted to go faster, as I generally like to push the final miles. However, we had to modify our pace. That’s part of the deal on a tandem.

The Back-to-Back Tandem. We saw much of them. Courtesy MG.

On the other hand, the PBP course is replete with tandem-friendly parts. We took full advantage of the tandem’s momentum and sailed through fast segments whenever we could. Brest to Carhaix — fun! Tinteniac to Mortagne — even more fun! Motoring across the French countryside, completely in sync with each other, is a great memory.

When you set out to do something like PBP, you can put in all the work and focus into it that you like, but ultimately things have to fall into place “just so” to make it happen. Health. Work. Family. Completion of the brevets. Life must leave a space for PBP, and just getting to the starting line is a huge accomplishment.

Getting to the starting line with your tandem partner is a huge thrill because it took both of you, working together, to make it happen. Seeing all of our teamwork culminate at PBP was a huge payoff for so many months of cycling together. 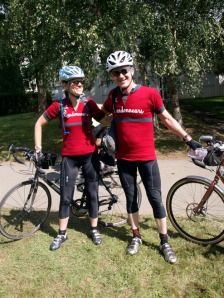 The sun is out and we’re happy! Courtesy Antoinette Galon.

Tandeming is not for everyone, and getting the two-wheeled beast to Paris, and then to Brest and back, was no small endeavor. Yet we were rewarded throughout PBP with great luck, the best of French hospitality, and the company of many friends old and new.

Congratulations to all who participated in PBP. We were thrilled to share it with you.