Whenever I ride around town, I usually see a number of other cyclists out and about, but I seldom have the opportunty to interact with them, except for a wave or maybe a passing smile. We’re all managing the complexities that come with urban riding and trying to get somewhere. 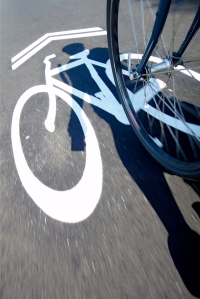 On the Morning Commute

Thanks to Twitter, flickr, and the local bike-centric blogs, however, I’ve come to know several cyclists who are part of the #bikeDC scene. I read about where they’ve ridden or what their recent commutes were like. I see photos of their bikes. I know what kind of gear they’re using, or what cycling-related issues are on their mind.

Being in touch with people this way gives me a feeling of community, even though our primary space of interaction is virtual.

While I know that the people with whom I share my ride stories, tweets, and flickr photos are out in the city somewhere, and I could   see them during one of my rides around town, so far that has only happened to me once (I crossed paths with @sharrowsDC).

Recently, a small group of us decided, via Twitter, that it would be fun to meet up in person at Swing’s Coffee around 8 a.m. on Fridays for pre-work coffee and conversation. Swing’s is located on the corner of 17th & G Streets. It’s one block from the White House Plaza, which is one of the primary commute thoroughfares for downtown cyclists.

We call our Friday meetup the #fridaycoffeeclub, or as Tales from the Sharrows so charmingly wrote:

At first, I felt a little odd talking to people who I’d previously conversed with only through the internet. On the one hand, I felt like I knew them through their writing. On the other, I had never laid eyes on them. Ever!

Having a virtual person become a real person and then carry on a conversation with me that isn’t in the form of typing initially felt somewhat surreal. And I felt a little self-conscious, too. I hoped I measured up to all my panda photos! 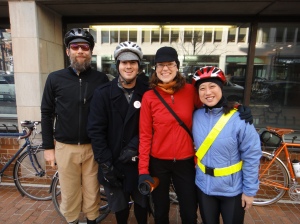 Those feelings have dissipated, and I must tell you that I LOVE #fridaycoffeeclub. Felkerino describes it as a happy hour for grownups. We order our drinks, chat bikes, share recent blog posts, discuss the state of bike lanes, or whatever else comes to mind, and then we all scoot off in our own directions.

When I was in high school I worked in my little town’s coffee shop/restaurant. I never understood why people showed up to just hang out and drink coffee. Two decades later, I’ve figured it out. Getting together with others to share warm greetings, hot beverages, and light conversation is a civilized reprieve from the hustle of the city and pressures of the work day.

#fridaycoffeeclub also makes the city feel smaller, more cozy.  Gradually, I’m putting faces to the names of people in my virtual cycling community, and meeting some really interesting people in the process. If you ever find yourself near Swing’s Coffee on Friday around 8 a.m., I hope you will join us. And if you want to make sure that we will be there, you can always check in via Twitter. Search for #fridaycoffeeclub and look for tweets from @dailyrandonneur or @gypsybug!