It’s been a while since my last “D.C. Commute Scenes” post. Guess everything became routine landscape the past few months. Not lately, though. Right now, big things are happening right here in Washington, D.C. (Insert snide comment here if you feel like doing so.)

The city is rapidly preparing for the presidential inauguration. People are out and about from morning until evening making it happen.

I don’t know exactly where all this stuff comes from or how it gets there, but one day you’re walking along a sidewalk swinging your arms wide in a carefree manner, and the next your having to shrink up your shoulders to scrunch past rows of bleachers, asking yourself if you should walk in the bike lane. (Answer: Don’t walk in the bike lane.)

The temporary White House Plaza structures have left about one-third of the normal walking space. I don’t have a picture of it because every time I ride by that area I’m just trying to get out of the way.

Save me a spot in the second row, please!

The Capitol lawn is even more blocked off than normal as folding chairs are placed just so. As a person looks west down the Mall, electronics, speakers, wire fencing, and other obstacles mar the landscape. The city is under construction.

I feel a pinch sorry for the tourists. The city looks much nicer without all this extra stuff everywhere. I don’t know anyone who would say that port o’potties make for a better looking city. I’m glad we have them, though. They may not look pretty, but they do make life better in the end. And in the interim, it’s a runner’s dream out there.

In addition to the upcoming inauguration, I’ve been noticing that a lost glove epidemic has seized the city. 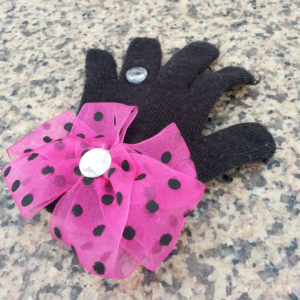 Today alone I came upon three that had become separated from their other half. Take care of your gloves, people. It’s a mean world. Cars run gloves over. People, seeing they have no mate, toss them into trash cans. A single glove = a lost future.

Finally, the fox and raccoons have officially taken over Hains Point for the winter. I rode there late last week and encountered five fox and one raccoon. None of them were riding bikes. Neither was anyone else but me. Hains Point is at its best in the wintertime.

Last year, two eagles regularly hung out in one of the trees at the southern tip of the Point, but I’ve not seem them this year. Anyone know if they are still around?

There you have it, folks. January in D.C. It’s not so bad.