So much happens on a group ride like the fleche. Teams cover over 225 miles in an intense 24-hour period. It can be overwhelming in retrospect. For me, it’s often easier to focus on the memories that emerge after the event ends and some time has passed. Recollections of a ride can be so distinct to what you experience during it or even in the immediate aftermath. 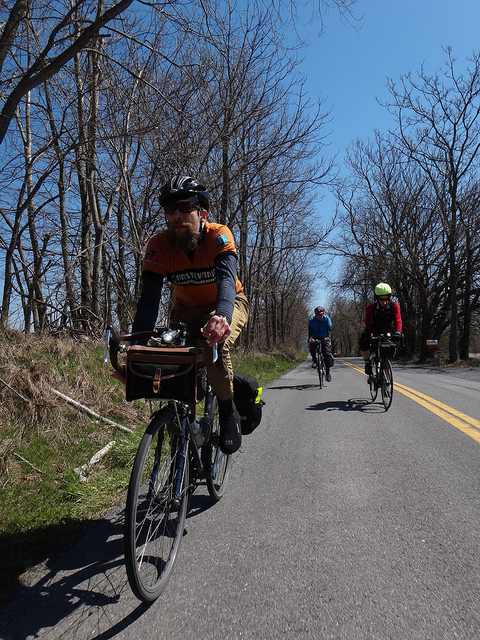 Felkerino has a full ride report planned, but in the meantime I wanted to put pen to paper about a bit of my experience.

As I rode this weekend, I pondered the various elements of the fleche. Each team takes on a unique identity depending on its members. Our team this year, Definite Maybe, was composed of: Felkerino and me on tandem; Lane and Mike, who have been on our previous two fleche teams; and Bennett, who was completing his first fleche and longest ride to-date.

Rides are heavily influenced by the weather (obviously). We had sunny skies by day, and a southerly wind for most of the 24 hours. Temperatures were pleasant and in the 50s for most of the day. That’s nothing to complain about, although I wish it had been ten degrees warmer. Night temperatures hovered in the 40s. Lucky me, I also had a draft from Felkerino.

This year seemed to take on a more serious tone than others. I am still puzzling through the various reasons why. Maybe it was the cooler temps, which dissuaded us from lingering in one place for too long. Perhaps it was partially because our friend Mike was sick, and ended up having to stop after completing over 180 miles. Maybe it was because of the newness of the event for our teammate Bennett, who was testing himself with a new challenge. Having ridden the course two times previously, I wondered if the course had become too familiar, despite how much I enjoy many parts of it.

Compared to other fleche rides, I spent more time with my head down, pushing the pedals trying to eat up the miles, focused on getting to the end as opposed to being content on the journey. Only when I reached the 22-hour control, an IHOP on the outskirts of D.C., did I relax with the realization that, with the unfortunate exception of Mike, our team would finish the fleche.

After fretting about the likelihood of cold and windy evening miles, they turned out to be my favorite segments. The sun set, our team controlled at a gas station, regrouped for the night ride, and soon set out into the early evening’s darkness. Despite the forecast for clouds, the sky was clear and full of stars. There was wind, but not as much as I had worried about. The temperatures stayed tolerable throughout the evening as long as we kept moving.

Our bike performed well. I continue to be impressed by our new Co-Motion Java. Its fit is excellent, and its climbing feel solid and responsive.

My body withstood the physical and mental exertion of the fleche without any issues and only a slight residual aching in the knees to remind me of the ground I’d just covered. Unlike last year, the drowsies never cast their spell on me.

Yesterday I vacillated between moments of elation and exhaustion, but mostly elation. Team Definite Maybe had a good ride and I was proud of us. Bennett accomplished a new milestone and his wife Laurie met us at the finish to celebrate and share it with him. Mike made a smart decision to stop riding when he realized that the event was too much for his current physical state. Lane shepherded our team throughout, made sure that we stayed on schedule, and kept us thinking positively about the event and each other. Thanks, Lane.

I missed our friend, Eric, who accompanied us last year, but hopefully he can definitely maybe join us next time. I say that after telling everyone that this year would be the last fleche I ever do. Now that I think about it, I might say that every year.

P.S. Thanks to Bill B. for the two team photos in this post.