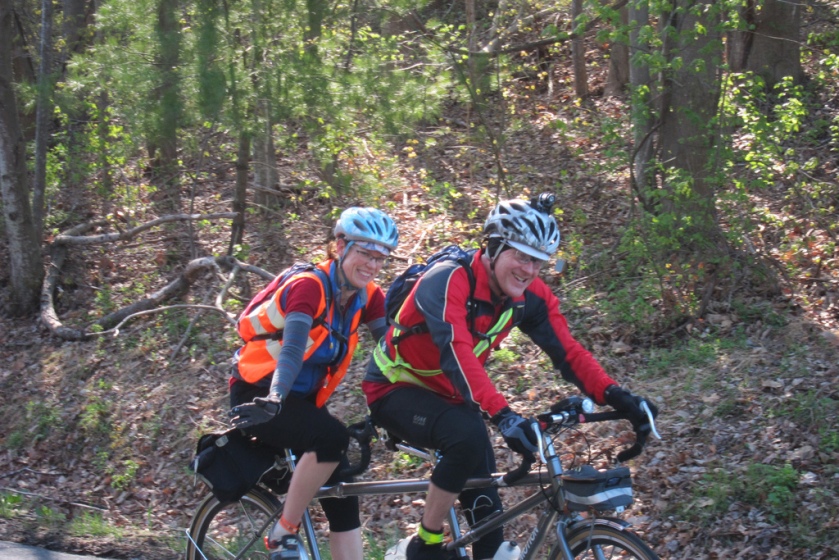 I started riding with the D.C. Randonneurs in 2005 when I was invited to participate on a flèche team. At that time, I had never ridden farther than a century and I had no idea what randonneuring was. Despite my ignorance the flèche sounded like an exciting opportunity to test my limits.

To prepare for the 360K distance, I eagerly threw myself into riding. I logged weekends of back-to-back centuries, and participated in big training rides of 145 miles and longer. The flèche came and went and still I kept riding with the randonneurs.

Before finding out about the D.C. Randonneurs I had never fathomed pedaling over 200 miles in one go on my bicycle. Yet there I was, getting it done. So many of these rides represented new personal milestones. First back-to-back centuries, first double century, first tandem brevet, first Super Randonneur series. It took a lot of effort to make those rides happen, but I was fueled by the thrill of new accomplishments and the novelty of testing how far I could go under my own steam.

In the years that followed, the desire to expand my cycling radius and explore new terrain outside of D.C. inspired me to keep coming back to the brevets. I liked getting to know the randonneuring community.

I increased my comfort level with attempting long distances, especially the 400K and 600K brevets. Felkerino and I refined our skills as a tandem team. I developed a rich catalog of randonneuring tales.

Fast forward and rather than seeing the rides as exciting challenges that mean a weekend of riding around with Felkerino and randonneuring buddies, my mind filled with the other less palatable aspects of these long rides, like the pre-event staging, the sleep deprivation, and the time spent driving to and from ride starts.

Last year I found my way around these frustrations through the Colorado High Country 1200K. I was so excited about that ride, and knew the only way to get there was a through completing a Super Randonneur series.

High Country ended up being an incredible, magical at times, grand randonnee thanks to a fantastic course and fine riding company. Even so, at the end of last year Felkerino and I still looked at each other and said no 1000K or 1200K in 2013.

When I look back on Felkerino’s and my brevet results over the past few years, I think we have been fairly active. In 2010, we rode the Endless Mountains 1000K. Paris-Brest-Paris followed in 2011. And like I said, we could not resist the appeal of John Lee Ellis’s Colorado High Country 1200K in 2012. The memories and stories from these rides live vividly in my mind.

Those of you who do these rides know how critical it is to fully commit to them. Otherwise, you spend energy you can’t afford to lose wondering why you’re out there. For whatever reason, I don’t feel completely invested in the brevet experience right now. It is a good time to take a break, and Felkerino and I have not ridden a 400 or 600K this year.

I initially struggled to understand why not doing the 400 and 600K brevets seemed like such a big deal. A couple of good conversations with friends helped me realize that since those first rides in 2005, my identity has become tied to randonneuring. Instead of being a thing I do, randonneuring became part of how I defined myself.*

Being a randonneur has mattered so much over the last eight years because of the intense experiences I’ve had and because it’s also one of few activities I do that I think is special. I suppose a lot of people want to be special in some way, and randonneuring has been my special.

I love the brevets. I’m proud to tell others that Felkerino and I met through randonneuring and that we ride with the D.C. Randonneurs. I revel in recounting stories of our randonneuring adventures. But the fever to do them has not been there this year.

It’s time to do other things on the bike. Taking a break from the longer brevets gives me time bring back the fever to return to the full series. In the meantime, weekend century rides and summer bike touring sound like just the thing for me.

This past weekend, Felkerino’s and my weekend touring rides took us along a stretch of road the D.C. Randonneurs 600K also passed through, and we saw a few of the riders en route to our overnight stop.

When they passed, part of me wished that we were doing their ride and sharing in their adventure.

That sense of longing is what I need so that after this break, I enthusiastically clip back in for the full series with our fellow randonneurs. After all, I’m married to Felkerino and he already has PBP 2015 circled on our calendar.

*For another take on the theme of identity, check out Ultrarunnergirl’s insightful reflection on her own exploration of being a runner.