Tara and Simon’s RAGBRAI Part 2 of 4: The Ride

What is it like to be a rider on RAGBRAI, the largest cross-state bike ride in the country? Tara takes us there with her vivid recount. 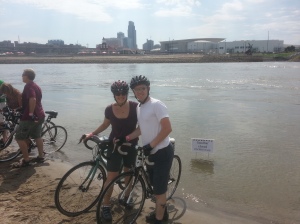 Tara and Simon in Council Bluffs

Because we had to be out of the campsite each day by 7 a.m., each day’s ride began early. The first morning in Council Bluffs we stood waiting to turn from the campground, looking for a gap in the steady stream of riders already on the route.

A passing rider yelled, “If you wait to the end of the line, you’ll never get started!” Point taken.

We joined the steady stream of riders, rolling through Council Bluffs’ historic district, and then quickly up what turned out to be the second hardest hill of the week (although we didn’t know that at the time).

The first thing we had to immediately get used to was riding on the same road with 10,000 other people, something we couldn’t have prepared for.

For our own survival, we quickly learned to shout out “Slowing!” and “Rider off!” when we pulled to the side of the road, and to yell “Rider on!” when attempting to find some gap in the pack of riders pushing down the road.

Each day had five to six towns that we passed through, creatively called “pass-through towns.” Due to the crowds, we ended up dismounting our bikes and walking them through town.

We parked our bikes by leaning them against a building, on someone’s lawn, or hooking our handlebars over a cable laid on for the occasion. Although we carried a bike lock with us, we never used it. 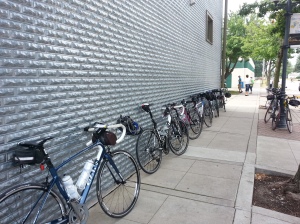 Once off the bike, we would grab something to eat from a vendor: burritos, smoothies, corn on the cob, and other delights. Slices of homemade “church lady pie” (apple, rhubarb, cherry) were in high demand, particularly if paired with a scoop of vanilla ice cream.

There was usually a beer tent. Disappointingly, it never offered any local Iowa brews, although we were able to try a few at the Peace Tree Brewery in Knoxville, Wednesday’s overnight town.

Some riders seemed to be taking full advantage of beer tents and beer gardens wherever available, but between the heat and the limited choices (Bud Light or Michelob Ultra?!), we stuck to one beer during the riding portion of the day, and often skipped it altogether.

We fell into the same rhythm most days: on the bikes between 6 a.m. and 7a.m., far earlier than we would normally start when at home in Maryland. We would ride out of the town for a few miles, find a pancake breakfast sponsored by the local Kiwanis or Knights of Columbus, and then ride another 10 to 15 miles before stopping at the next little town for a bathroom break or to top up our water bottles.

We almost always picked up something to eat or drink in the pass-through towns, and looked for shady spots on people’s lawns to sit in and relax for a while. Riding an easy pace and stopping to walk through all of the towns easily took us to mid-afternoon.

When we arrived in the overnight town, we would search out a friendly town volunteer or follow signs pointing the way to our campsite, which was still often a couple of miles away.

We usually waited until the overnight town to have our big meal of the day. About half the time, we ate at a restaurant. Otherwise, church spaghetti dinners provided a good carbs-for-dollars ratio.

Iowans delight in telling out-of-staters that Iowa is not flat. We found that the gently rolling hills suited our riding style. You could get some good momentum going down the hill that took you most of the way back up the next bump without exerting too much energy.

We were by no means the best riders out there, but we handled the hills consistently well. Mockingbird Hill in Springbrook State Park appeared about 50 miles into the second day. Incidentally, this was both the hottest and longest day. Touted as the steepest hill ever to appear on RAGBRAI, Mockingbird Hill was a half-mile slog at 10 percent grade.

As we approached the hill, many (if not most) riders dismounted and began walking up the hill on the shoulder. Given the density of riders already going up the hill, drifting over to the right and getting off safely wasn’t really an option. Neither was falling over or stopping, which would have easily taken out other riders behind us.

Fear and pride meant we had no choice but to drop into the smaller chain ring, knock out a steady cadence, and pray we didn’t go into too much aerobic deficit before reaching the top. 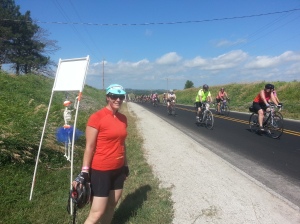 There were plenty of flat roads as well, with corn fields and the occasional farm house on both sides of the road. We crossed Red River Lake and the Des Moines River. We passed farm kids selling bottled water and cookies by the side of the road, and commercial vendors offering fruit smoothies, pickles, coffee, and of course, pork chops from the venerable RAGBRAI institution, Mr. Porkchop.

One thing we learned to be vigilant about was road conditions. An unfortunate few riders ended up in an ambulance on the second day after getting their tires caught in a particularly nasty crack in the pavement at the bottom of one hill.

Sometimes there would be smooth tarmac, which made keeping a consistent and high pace seem effortless, while elsewhere (notably, heading towards West Des Moines, and on the last day) we found ourselves repetitively hitting jarring bumps in the road. Ouch.

With the hardest day out of the way early in the week, we slowly began to relax on the following days. Given our relative slow pace (due in large part by the through-town walking traffic jams), we were nervous about the last day’s ride to Ft. Madison, located in the southeast corner of the state.

We needed to be done early in order to ensure we made it on the early charter bus to Des Moines. It was a 63-mile ride, with about 2,400 feet of climbing on the route. We began riding in the dark at 5am, with two tail lights and a Knog front light between the two of us. It was not ideal, but we followed a thin line of red blinking tail lights for an hour before the sun started to rise.

On the last day, we were hurting on many fronts. Neither of us could get comfortable on the saddle, we had muscle heaviness that wouldn’t go away, and we were experiencing hand numbness from the vibrations off the bumpy cement road. 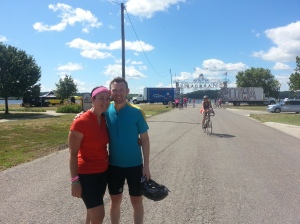 Fear of missing the bus proved a good motivator, however, because our average speed was a good mile per hour faster that day than all of our previous days. We finished in Ft. Madison with enough time to have our picture taken in front of the Mississippi River, drop off our bikes at High Country, and grab some lunch for the bus ride.

Up next: Tara talks about what makes RAGBRAI such a unique experience, including some of the other riders she and Simon encountered as well as the unexpected challenges they faced throughout the week.