Unexpected Triumph on a Double Hairpin

You know those people who say “My favorite part of my day is my bike commute?” Yeah, I bet you do. They’re giving me a headache.

Today all the cars were out trying to shove themselves in my space while all the bike commuters raced me (and won). Sometimes the commute has an energy like that, especially during the early summer and before the dog days slow everyone down.

In spite of my disgruntled state, I’ve been taking the scenic way home because it makes my mood slightly less foul. (I am a terrible ambassador for bike commuting these days. I’m chalking it up to needing a vacation.)

My scenic route is still crowded, but gives me additional time to ponder my existence as I gaze out over the Potomac River, which is quite pretty to look upon as long as you don’t think too much about what’s in the water.

One segment I have added to my route is a flyover path across the Washington Channel from Ohio Drive that terminates at two abrupt hairpin curve descents that then release the rider onto the sidewalk/street at Benjamin Banneker Park near L’Enfant Plaza in Southwest D.C. 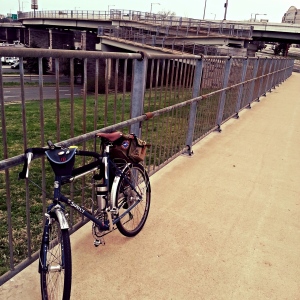 I have never ever managed to make the right hairpin without putting a foot down. In the beginning of April I told myself that I would make that turn a little skills project. I’d keep working on the curve until one day I would not pad my way around it.

Whenever I attempted the right-hand hairpin turn, I put a lot of focus into it. Probably too much. Felkerino would tell me to swing wide and cut right, but I could never convince my bike to follow that instruction.

As I rode over the Washington Channel today I found myself alone and grouchy. A voice inside me said I was going to make it around the hairpins foot-free. I agreed and told the voice that if I ran into the gate and fell over in my attempt, well, that was just fine. It would be a fitting end to a commute.

But that is not what happened. Following Felkerino’s advice, I swung wide to the left and cut sharp to the right. I saw the gates of the path in front of me and I held myself steady as I continued to swing my bike sternly around the turn.

And. I. Made. It. What a glorious shock. I smiled from ear to ear and zipped my Quickbeam around the left turn. Victory!

Was it a fluke, I wondered. Why not try again? I retraced my steps up the double hairpin (going up without putting a foot down is a future project, by the way), waited for a couple of cyclists to pass by, and set my sights on another attempt.

And? I made it again. My right hairpin curve success was no fluke! It was a true skills triumph. In a surreal way, it reminded me of learning to ride without training wheels.

No one witnessed my foot-free bend around those curves, but even if they had, most likely they would not have understood how much this simple act– yet not simple to me– meant.

My heart swelled and I silently pedaled the rest of my way home, proud of what my bike and I had accomplished together. It’s not every day we grumpy grownup bike commuters experience an unexpected triumph. How lovely it is to savor.