BikeDC Commutes 2014: The Months in Photos

As I was assembling my recent post about 12 months of running in D.C., I realized that I wanted a memory of the past year’s bike commutes in the city.

Considering I spent much of the year feeling blasé about the urban bike experience, my photos make it seem like it wasn’t so bad. As if I enjoyed it, even.

Unlike what we’ve experienced so far this January, last year at this time was cold with snow on the ground. The sheet of ice across the Potomac River with the haylike grass made an impressive backdrop on this morning commute. 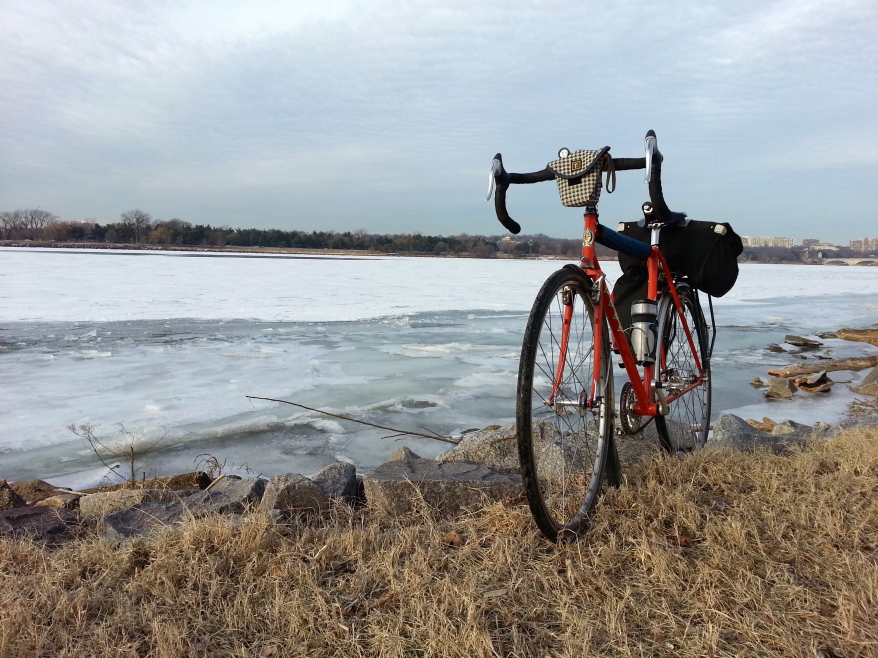 Quickbeam along the Potomac River

We drank coffee and munched on cake in recognition of the day. Big thanks to everybody who continues to make Friday Coffee Club the sweet meetup that it is. 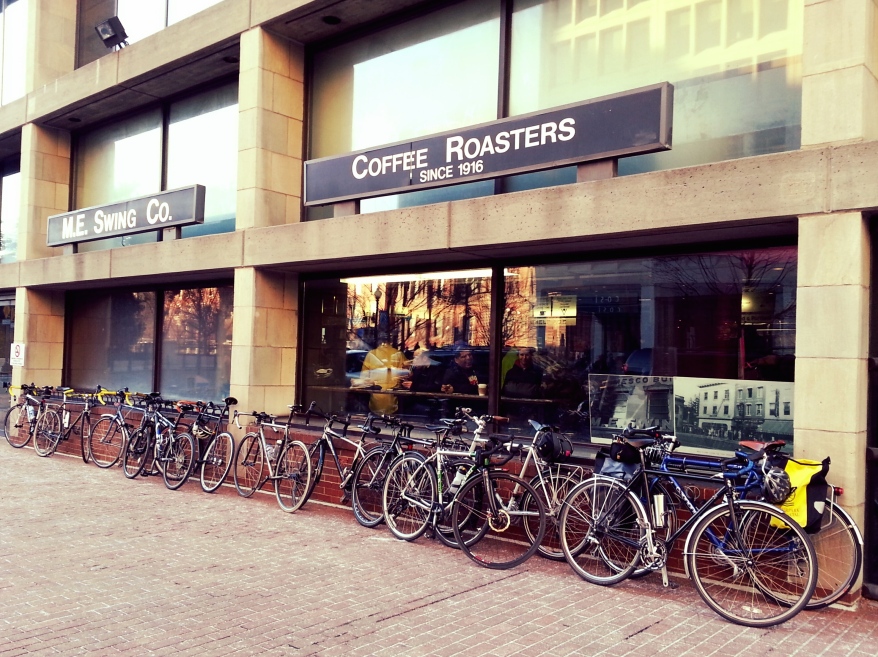 Browns and grays continued to be the color du jour during February, and ice was a popular accent to it all. This is a morning commute photo of the iced-over reflecting pool in front of the U.S. Capitol (pre-braces). Later in the day, I observed people daring to walk on it, but they weren’t there long. Security doesn’t like those sorts of antics.

It wasn’t always gray outside, though. Golden sunsets pierced the sapphire skies on occasion to give us hope that D.C. winter wouldn’t last forever. 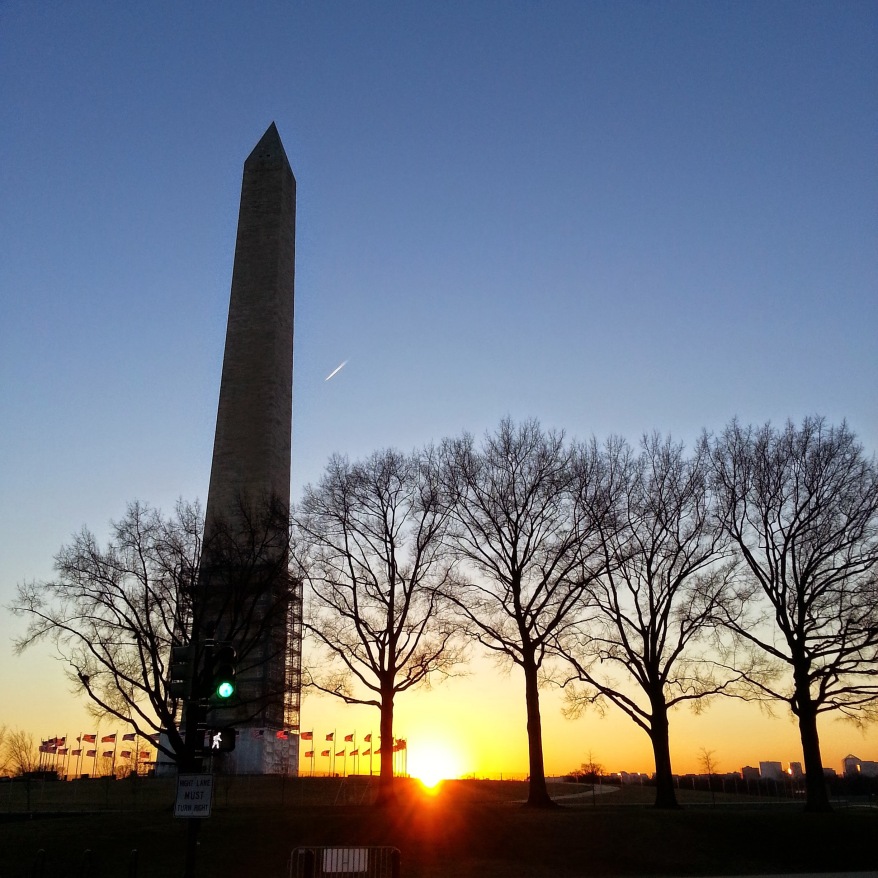 You can also see in this photo that the scaffolding around the Washington Monument was being removed, to prepare for a late spring reopening after fixing the damage caused by an earthquake in August 2011.

Snow kept falling and the temperatures stayed frigid. Even the snowmen were angry about it. 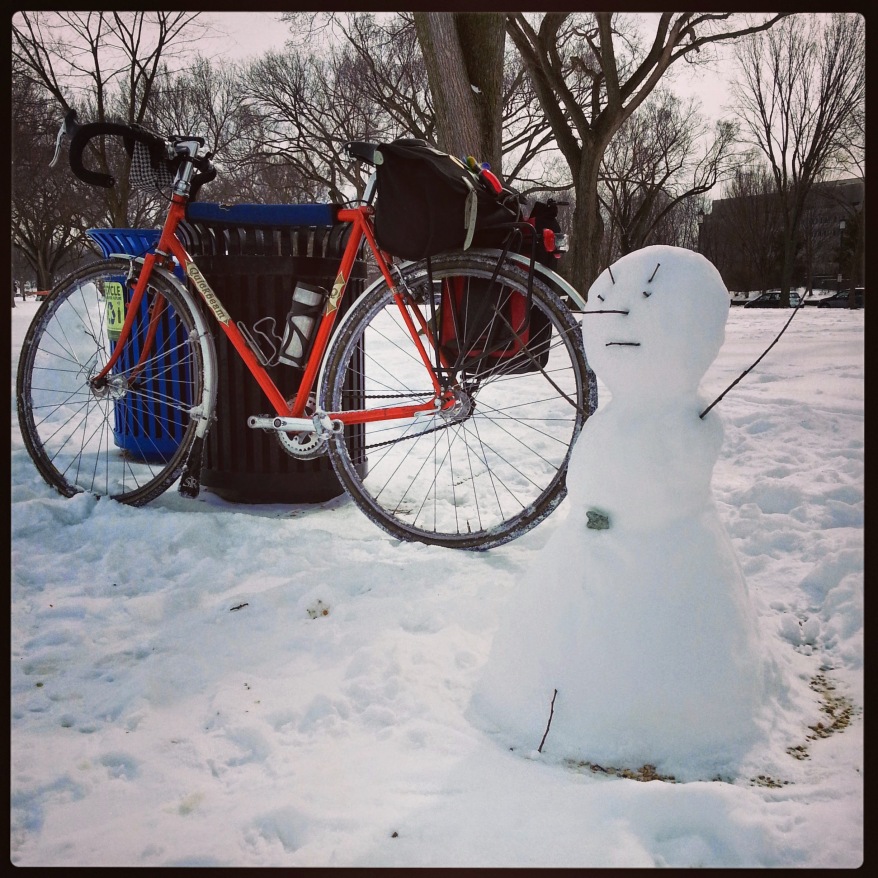 March is also my birthday month, and I celebrated by going out for a pre-work ride to Chinatown Coffee with Felkerino. The city started to thaw out by mid-March, too. 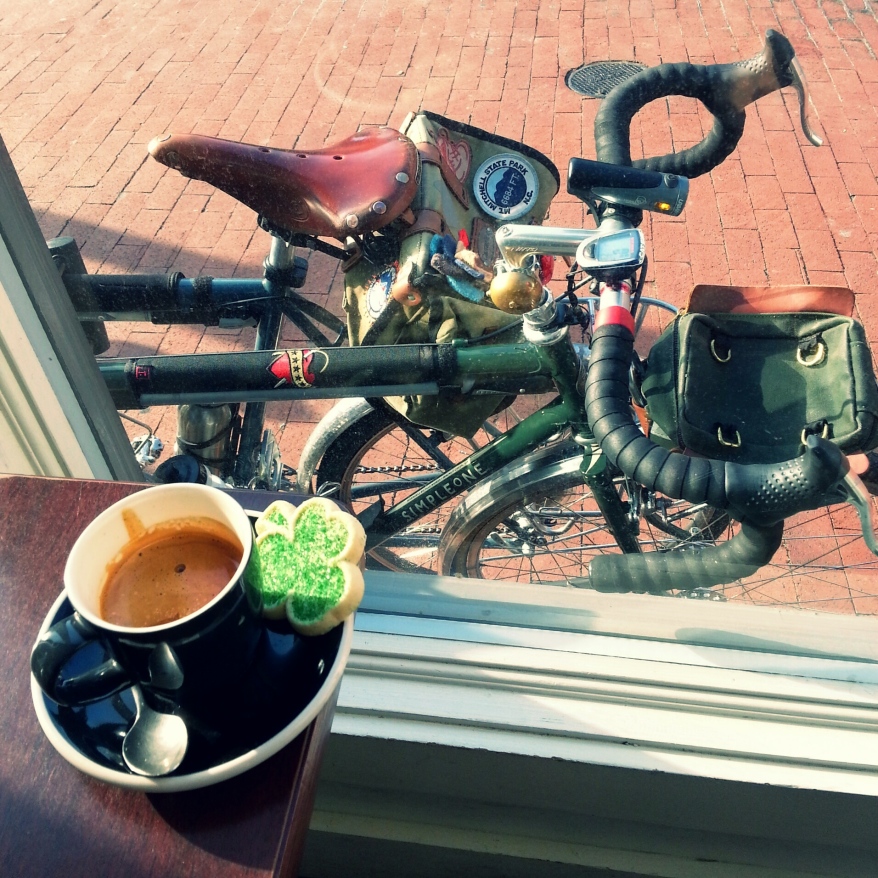 After a winter where D.C. had the displeasure of meeting the polar vortex, temperatures relented and we found ourselves in shorts again. The miracle of the four seasons.

I always liked this view of my morning commute, and I’m not just talking about seeing Felkerino. Streets are relatively empty along the Mall during the early morning, and it’s a beautiful time to ride this section.

In May, I had to have a rear wheel rebuilt because I wore it out. “Congratulations! You’re riding your bike!” So said Paul, of BicycleSPACE, after taking it out for a diagnostic assessment. Thanks, Paul.

Before I dropped the wheel off, I stopped near the shop. This is one of a few buildings in the area near the Convention Center that are being demolished for development. I wanted a memory of the texture and character.

One afternoon, as I rode Hains Point to spin out my brain, I spied this tree. I had never noticed it before, but it’s quite obvious that it’s been on the Point a long time. Shame on me. It’s beautiful, no?

For a few days in July, I had the pleasure of a commute similar to that of Mr. SharrowsDC, thanks to a work training in upper Northwest. We met up for a couple of post-work commutes. 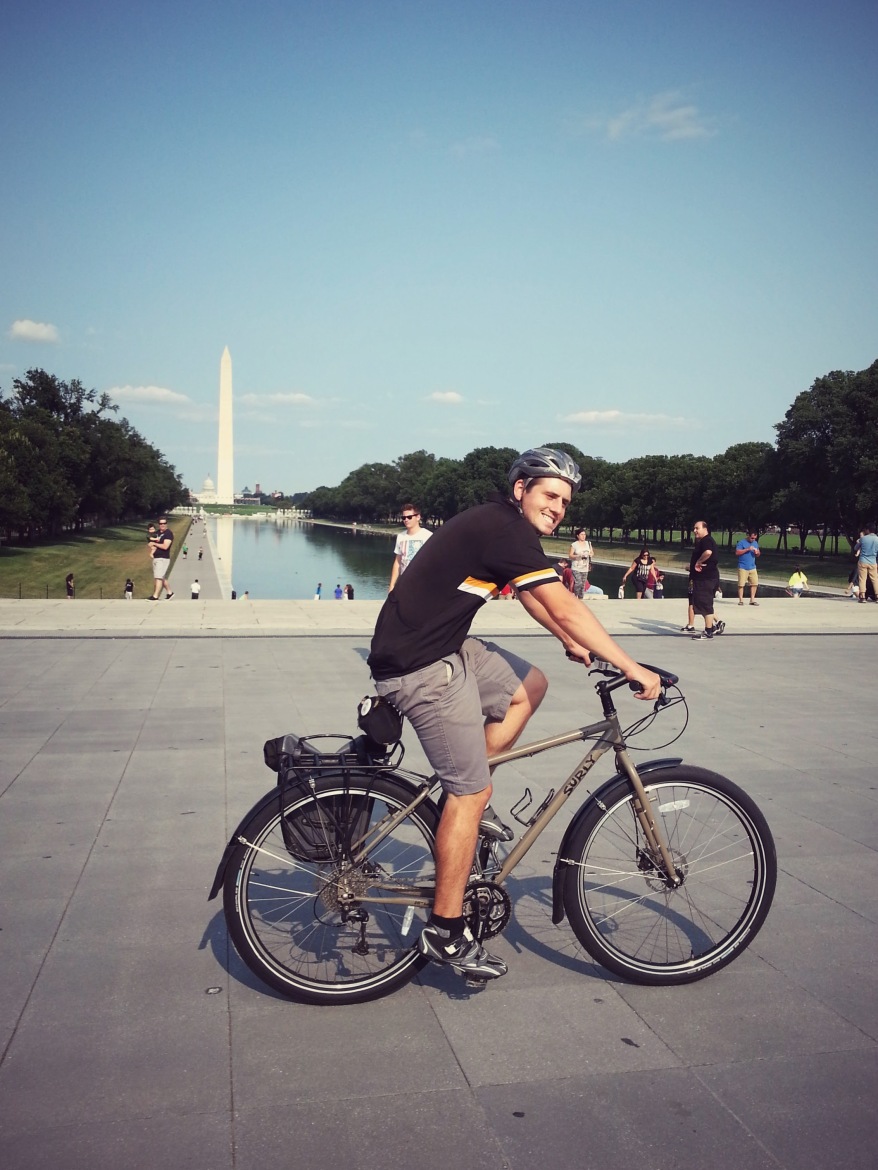 I also happened to encounter regular BikeDC commuter and fellow Quickbeam rider, Len, at the Penn Quarter Farmer’s Market one day in July.

How often do you see two orange Rivendell Quickbeams in the same spot? Answer: Not often. We memorialized the moment with a photo.

Around this time, construction began on the Southwest Waterfront. I feel mixed about the whole thing because, while I’m glad for an improved waterfront area, I miss the quiet of Water Street. I was also bummed that this community garden had to bite the dust.

I don’t know what I was thinking by inserting my Bike Friday here. Not only was it dense with vegetation, it was teeming with hungry mosquitoes.

I cut back on bike commutes this month, and focused my attention on run commutes. I still worked in the occasional bike commute, though. For this one, I dusted off the Velo Orange mixte, and stopped for a moment by the National Gallery of Art. 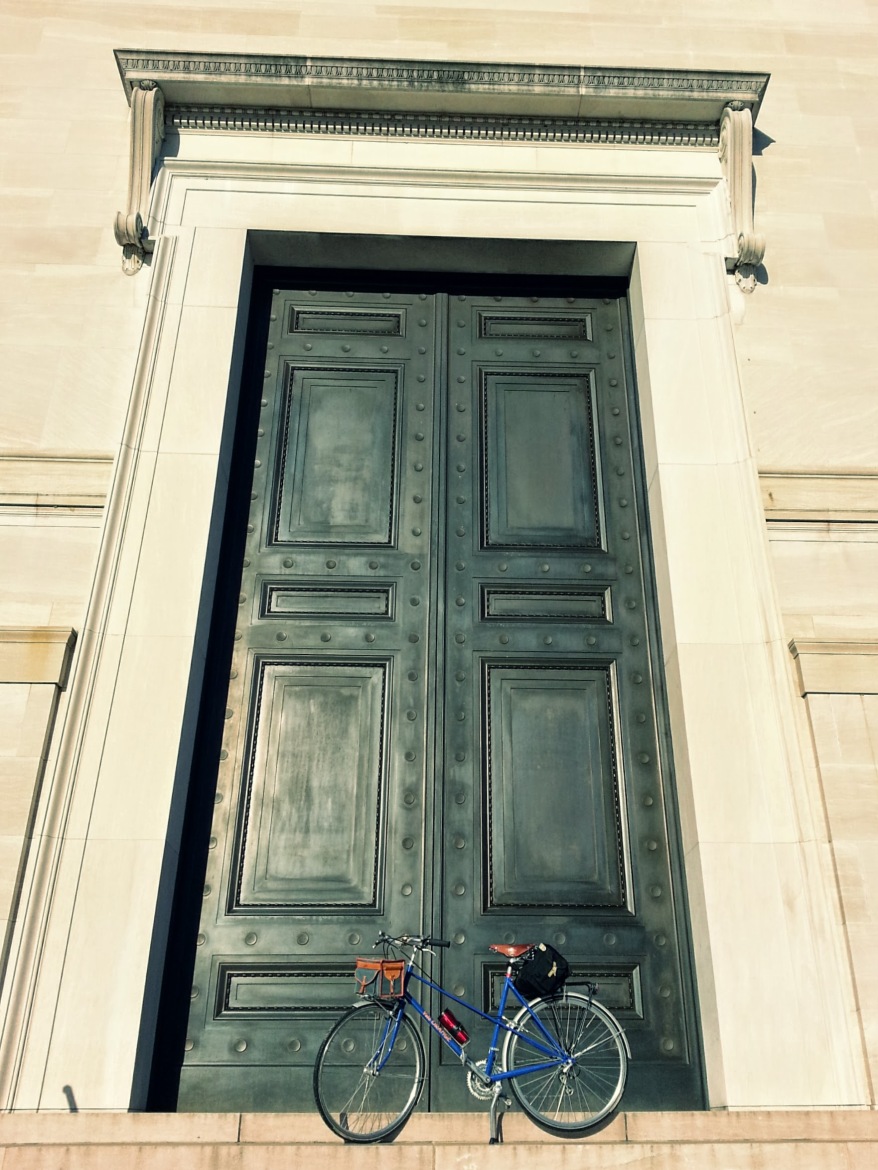 I like this area so much, especially in the mornings. The cobbled section of street, setback structure, and this imposing door make a cool spot. 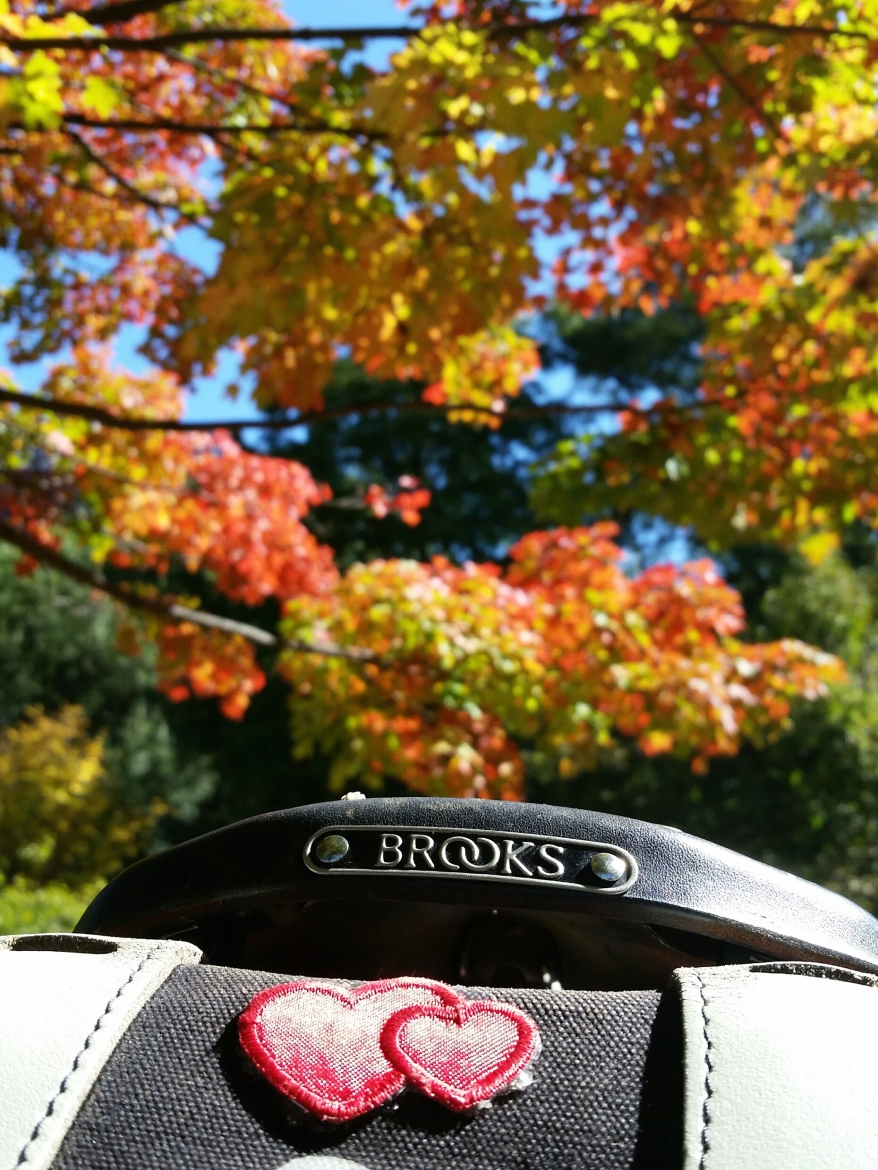 On a deliciously perfect day, I photographed my Quickbeam in Lafayette Square beneath the early fall canopy. I think everyone in the park was taking photos of these colorful branches.

The rainbow of fall color seemed to last and last this year in Washington, D.C. November cold halted the movement of some of the early rising tourists, opening the space for the stalwart BikeDC commuters. 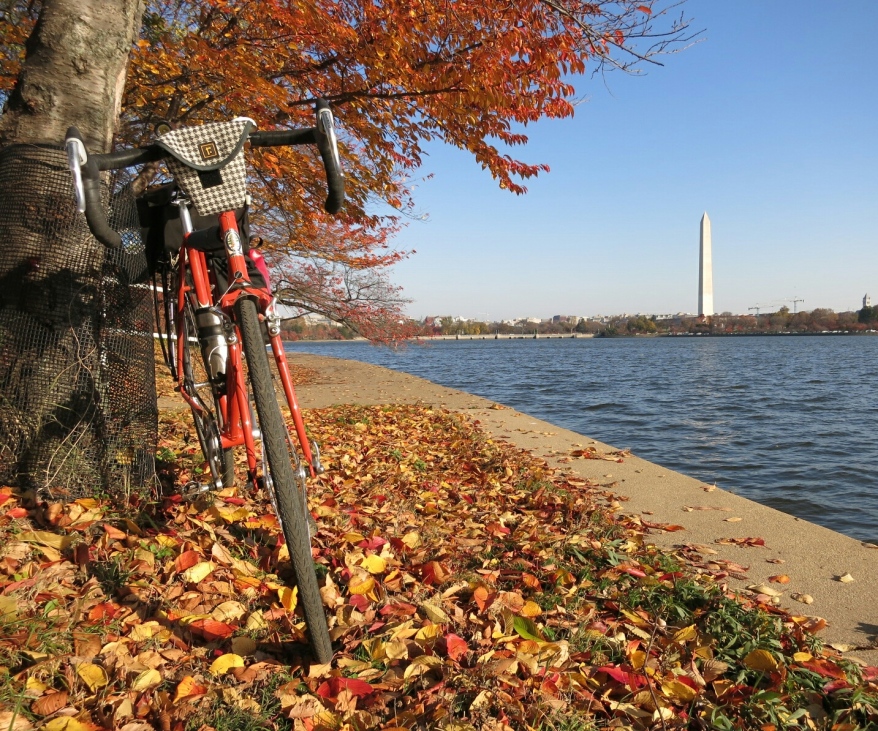 This photo is from a morning stroll with my bike around the Tidal Basin. The sound of leaves drifting off trees and down onto the water followed me as I walked along and savored the morning.

One brisk blue-skied morning I diverted from my regular route to see if I could get a shot of my bike beside the Washington Monument. As I lay on the ground and contorted my body to point the camera, Park Service staff asked if I was okay. “I’m fine!” I shouted back. You see, I’ll do anything for my art.

This month I also began a new commute route, and I regularly pass the intersection of New York Avenue and the White House Plaza. The bank clock is handy (and accurate, at least for the moment!).

Felkerino and the Bleriot, at the corner of the White House Plaza and New York Avenue

With all the run and bike commute photos this year, it’s surprising I ever arrived to work on time or home before dark.

During 2014, I relied primarily on my Rivendell Quickbeam and Surly Long Haul Trucker as my main commuters. Both bikes are awesome for commuting.

The Quickbeam is a single speed with a springy feel that carries weight well. The Surly LHT is decidedly unspringy, but rides well loaded and is an awesome grocery getter.

The two other bikes that saw commute use this year were my Bike Friday Tikit and my Velo Orange mixte. That tells me I either need to whittle down my stable (gasp!) or ride my bikes more (hmmm).

Generally, I put in about 2,000 miles through commuting– less than one-third of my overall yearly miles. I didn’t track them this year, but I imagine the numbers stayed about the same as in previous years. 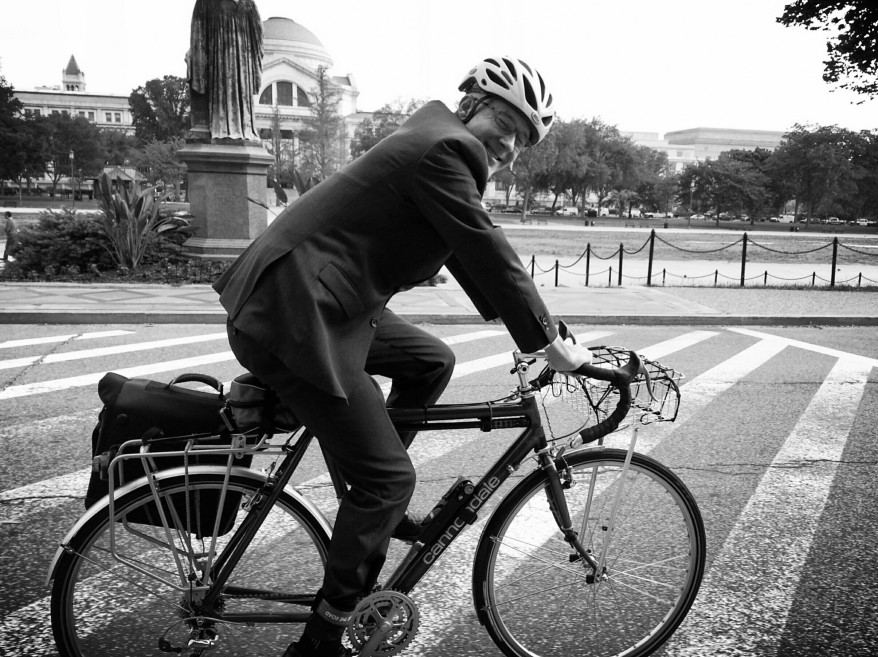 Felkerino, on a May commute

Felkerino was an excellent commute partner this year. Sometimes I enjoy a solitary commute, but it’s also nice to share the ride, too. ♥