Felkerino and I met up with bicycling friends Eric, Jerry, Barry, and Joel to ride the classic D.C. Randonneurs “Old Rag 200K” route. Jerry had some weird rattle in his rear wheel that would not go away, Barry was riding a loaner bike since his main rando ride was in the shop for repairs, our Schmidt generator hub failed, and Eric’s shifter broke in the final five miles.

Other than that, the day was spectacular. Windy and sunny, but warm with temps reaching the low 60s. It’s been so refreshing to ride under these truly spring-like conditions. The winds I feared were– for the most part– not so bad, as the hills provided many sections of shelter.

While Felkerino and I rode consistently throughout the course, my legs still lacked pop. As I considered my less-than-lively legs, I realized that this course was softly doling out a dose of reality– the reality that if I don’t ride with discipline through the winter I will likely end up in minimally acceptable brevet shape.

Randos by the forsythia

I’ve posted before about Felkerino’s and my approach to preparing for brevet distances: overall miles; time in the saddle; hills; and weather tolerance.

From January through March, I logged less than 1,000 miles, completed only one century-length ride each month, and didn’t force myself to ride long and out in the hills on frigid days. The lure of the espresso machine was strong this winter.

I’ve run just over 300 miles for the year, but I’m here to report that good running fitness does not translate into solid brevet shape. Running benefited me cardiovascularly, but the muscles used from one to the other are distinct.

We managed to outrun this speedy dog.

It is a rueful feeling to know what I should have done over the winter, but did not. As I rode on Saturday, part of me wanted to reach back in time to have the winter months back so I could follow the approach I penned in that randonneur preparation post and rigorously followed in previous years. Too late.

I admonished myself over my conditioning, but the spectacular skies, delicious panorama, and easy company of our riding group made it difficult to dwell on the negative. 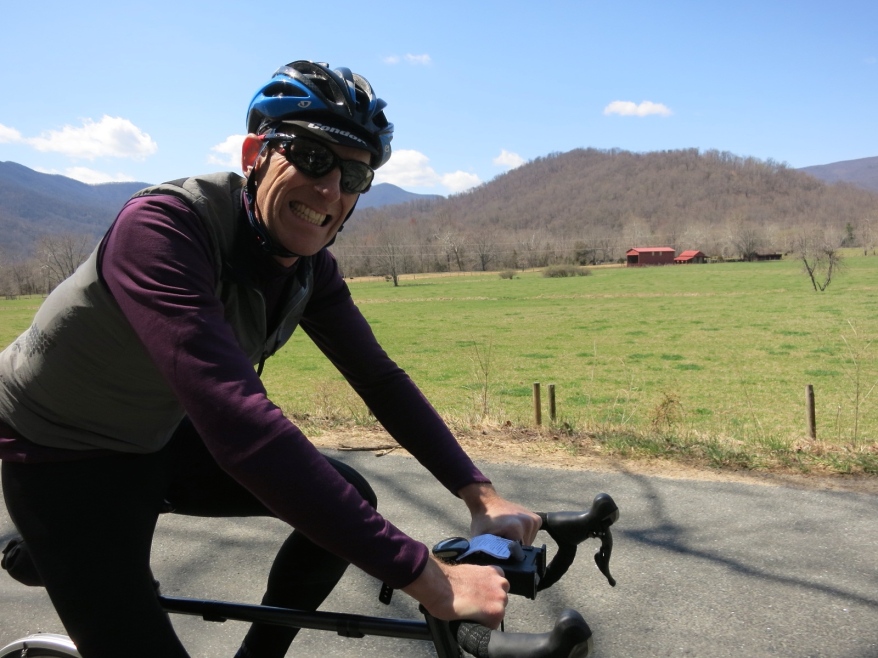 Jerry on Etlan Road, one of the most beautiful roads around

Despite the lack of bike fitness, Felkerino and I still made it around the course without any physical problems. It was our bikes that suffered most, it appeared.

Now is too late to undergo any intense fitness-building. What is important is to stay healthy, keep our base miles strong, and our attitudes positive. I need to look ahead, rather than peruse mileage logs that tell a story I can’t change.

While I wish I was more ready to roll through the brevets, I really enjoyed the lack of bicycling discipline and a break from feeling as though I had to log miles on the bike. My dose of reality this weekend showed that I paid the price of losing some of my fitness, but the benefit of being excited to ride long again was worth it.