Randonneuring events allow ordinary people like me to participate in extraordinary bike rides. Brevets changed my definition of a long day ride, from a century to more than double that– distances I previously could not even conceptualize pedaling.

The randonneuring community helped me feel okay as a rider who does not move particularly fast, but has a body that has proven itself durable over time and distance.

Yes, you must be in some semblance of decent physical shape, own a road-worthy bicycle, and have the free time to take on a brevet. But as long as you maintain an overall speed of 10 miles per hour, an ordinary person will be a successful randonneur.

And to my mind, being a successful randonneur makes you special. Because really, how many of us put the completion of a 250-mile bike ride that starts at 4 a.m. and takes you around and around with a card in your hand over the river and through the woods to all the region’s convenience stores and back to the exact same place you started on the top of our to-do list?

I discovered these randonneuring truths years ago so I’m not sure exactly why I signed up for our club’s 400K. Habit, maybe. A desire to spend the day out with like-minded randos.The thought that if you don’t keep doing 400Ks, you essentially concede that you can’t do them anymore. A notion that you’re only as good as your last brevet. Some mix of all of the above.

The course certainly was a lure. The Northern Exposure route takes a person far away from urban life into rural parts– some of them in Amish country– and offers many spectacular views, all of which are earned through vigorous pedaling. No views come free on DCR rides.

Felkerino and I ended up completing the 249-mile course in 19 hours and 40 minutes, having spent around 2 and 1/2 hours off of the bike. I consider that a respectable time for us, especially given the 14,000 feet of overall climb, and consistent with what we’ve done in the past. Viewed from that perspective, we had a good ride.

But overall the ride was a mixed bag for me. Frankly, it is easier to not endure the Friday post-work rushing required by a 4 a.m. start outside of D.C. and the usually fitful sleep the evening before a ride.

I had a difficult time settling into this brevet, and it was only until just before the century mark that I began to enjoy the beauty Felkerino and I had ridden ourselves into. Even then, the ride was a mental struggle.

A little discomfort and struggle is part of randonneuring. If I don’t want to experience those pieces of an event, or if they outweigh the overall pleasure or sense of accomplishment, then maybe it is time to change pursuits. 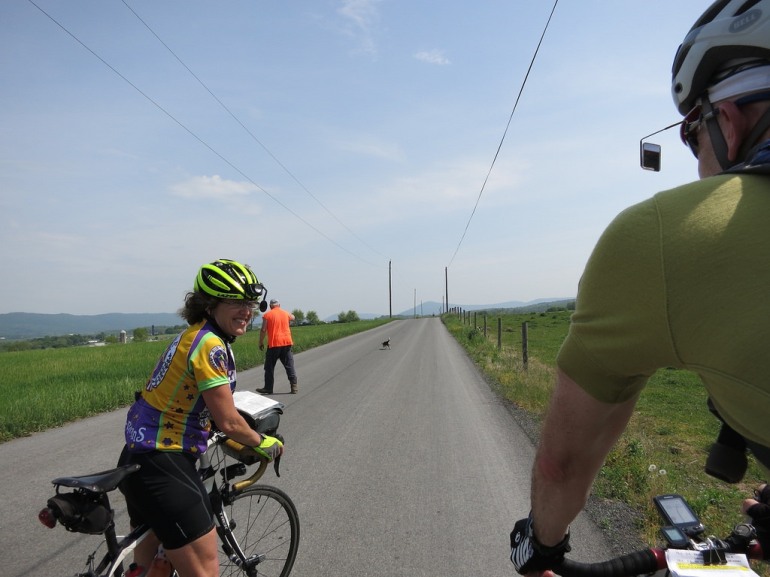 There were many small moments that justified my decision to ride. A dramatic chase unfolded between rider Theresa and local dog Bo, and Felkerino and I saw it all. Nobody bosses Bo around, especially not randonneurs. 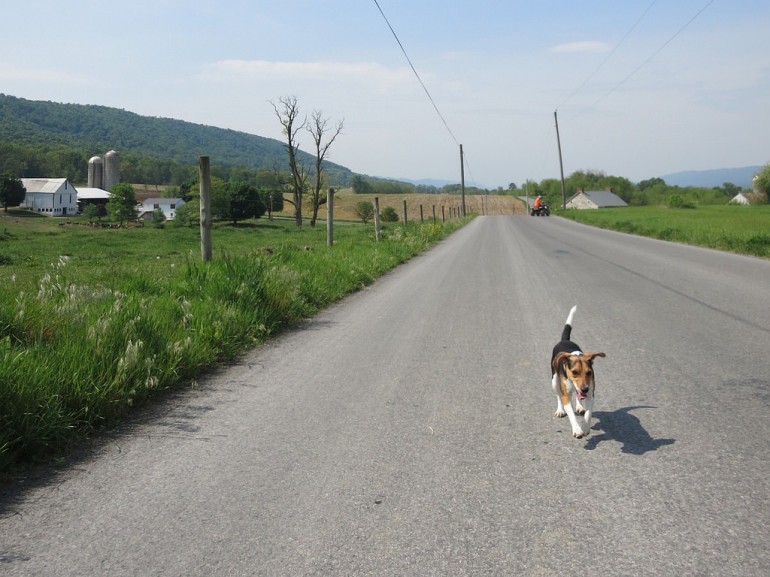 Saturday field work was going on in earnest and we even received cheers from a small group of Amish children who were taking some shade by a barn.

Despite its humble exterior, I had a great time hanging out by the “No Loitering” sign at the Food Mart, drinking pop (which I only consume during brevets) and sharing a laugh with fellow riders.

I relished the summer heat after our region’s cold winter. Even so, our day transitioned from decidedly toasty at 3 p.m. to much more pleasant riding temperatures after a thunderstorm came through.

I predicted that the storm would bum me out. Instead, seeing the rain roll toward us accompanied by the clouds’ low rumblings reminded me of days in Iowa, where storms like this are a regular affair.

It was awesome to watch new D.C. Randonneurs members Eric W. and David reach a new milestone by finishing their first 400K and their longest rides to date. I see the 400K as a threshold ride, where most riders will start in the dark and finish in the dark, too.

A 400K requires perseverance and a disciplined approach. Like the sign at the Food Mart said, No Loitering. Frittering time away at a control will come back to bite you. Not eating enough, eating too much, or eating the wrong things can send you to a very bad place on a ride of that distance.

You can’t get too lost in the idea of riding 249 miles or it will overwhelm you. The ride must be broken into distinct segments where progress is recalibrated and made manageable– 15 miles, the next control, 25 miles, over this rise, that telephone pole off in the distance.

Issues with the bike must be handled as best as possible. Some of this is done through preparation, and having the forethought to pack emergency gear, and sometimes you get creative on the road. David’s shifter broke early in the ride, and Eric was able to help him so that David could continue with essentially two gears. Seeing Eric and David manage these elements of a brevet and ultimately achieve that special success of brevet completion filled me with appreciation for the day and for what we all were doing.

Looking back on the weekend, I realize I am not quite ready to put the brakes on randonneuring, but I can’t deny that over the last year something stirs inside me on rides of 400K-plus– a pull to be somewhere else, engage with the world in a different way where the ordinary me can still dip her toes into the extraordinary.

I don’t know where or what that is yet, or if this subtle discontent will pass. In the meantime I enjoy the luxury of these thoughts sifting through my head as I ride long, with hopes that I will eventually understand what’s next. Whatever it may be, I do know that it will involve a bicycle and a certain tandem captain.