In 2014, Capital Bikeshare welcomed a solitary pink bicycle into its fleet, the BikeInBloom. This bicycle, the only one of its kind, is released into the wild for just shy of a month each year, as part of the city’s cherry blossom festivities.

In the three years the BikeInBloom has flitted in and out of the Capital Bikeshare rotation, I have come upon it only twice, and only from a distance.

Every year during cherry blossom time, I keep my eyes peeled as I pass Bikeshare stations, looking for any opportunity to take the BikeInBloom for a spin. Alas, the BikeInBloom has always escaped me.

Yesterday, Felkerino and I were returning from a night out, and as we approached a Bikeshare station near our house, a subtle splash of pink along a rear fender distinguished itself from the row of red.

Enthusiasm propelled me forward as I reached hastily for my Bikeshare key. Our time to meet had arrived.

After three long years of searching and waiting, our paths finally converged. 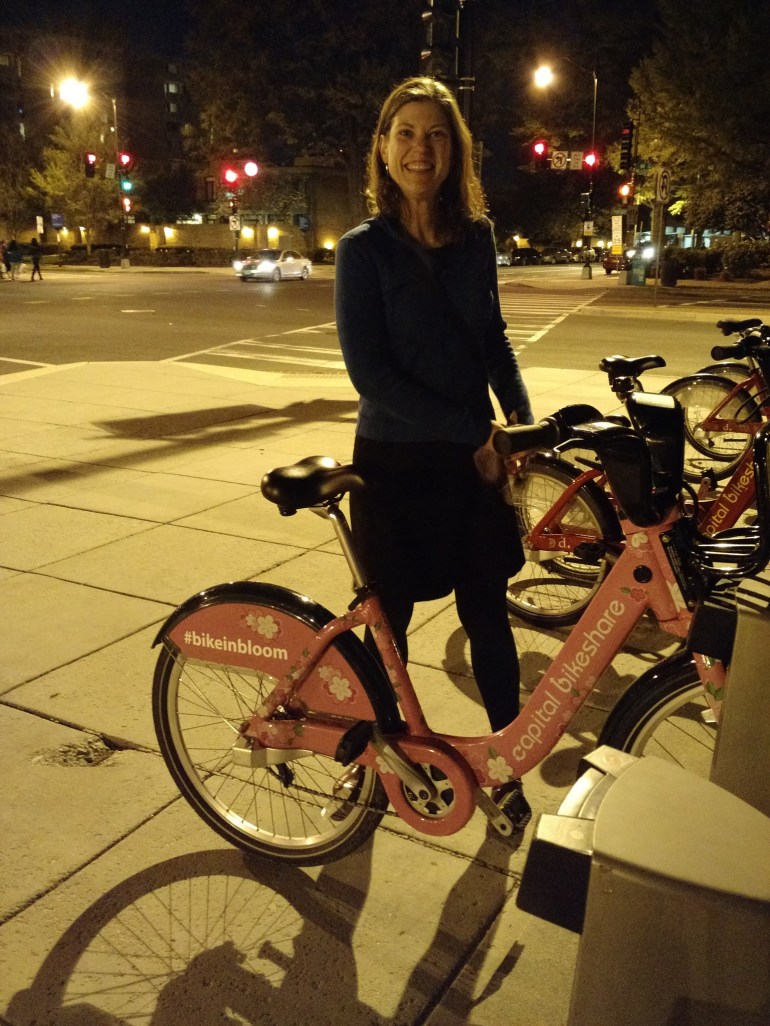 Felkerino and I pedaled away for an evening joyride with the pink unicorn. I imagined myself beautiful and lithe as I pedaled. I was awash in satisfaction aloft the 75-pound steed with three speeds. I smiled from ear to ear and I may have shouted a bit, despite the late hour.

What makes the BikeInBloom so special? Its elusiveness. Its pastel hue and the dear flowers that adorn it. The touch of serendipity needed to unite you with it. The Twitter and Instagram cache it offers those who ride it. Its tangible representation of spring’s arrival.

The rumors of the fourth gear are only that, but one can’t help but pedal lightly along knowing that they are riding one of the most special – if not THE most special – of Bikeshare steeds. It must be well cared for, I thought, and it certainly shifted well and rode soundlessly as Felkerino and I rolled along.

As we rode under a clear sky on the quiet streets of the nocturnal city, the pink unicorn passed unnoticed. But I knew that Felkerino and I were in the presence of something magical.

Given that this pink bicycle’s time on D.C. streets ends this weekend and it will not return until next year’s blossom season, I had resigned myself to another year without a ride on the BikeInBloom. They say you never find true love until you stop searching. So it was with the pink unicorn of bicycles, the BikeInBloom.