If you ride or run in D.C., you’ve probably had your share of conversations about the C&O Towpath, a hardpack multi-use and car-free path that starts in Georgetown and extends all the way to Cumberland, Maryland.

The C&O: sublime urban escape or an exercise in monotony? Tooth-jarring nightmare or just what the doctor (not your dentist) ordered? I meander from one side of the argument to the other whenever the C&O becomes a discussion topic, but on the whole, I find the C&O an invigorating, once-in-a-while route.

Not having ridden any real length of it for a few months, I had been anticipating my weekend C&O plans. Friday: ride 68 miles to Harpers Ferry, West Virginia, via the C&O. Saturday: run the Freedom’s Run Marathon through Harpers Ferry, 10 miles along the C&O, through Antietam Battlefield, and into Sharpsburg and Shepherdstown. Sunday: ride the 68 miles home to D.C., again via the C&O.

My eagerness waned as, days before the event, the weather turned dreary and rain became a central feature of the forecast. Whenever a shower passed through, I imagined the dampening conditions of the C&O. Despite my worries, I packed my pannier with my Mizuno Wave Riders – running shoes that would drain well and not weigh me down during my 26.2-mile journey. 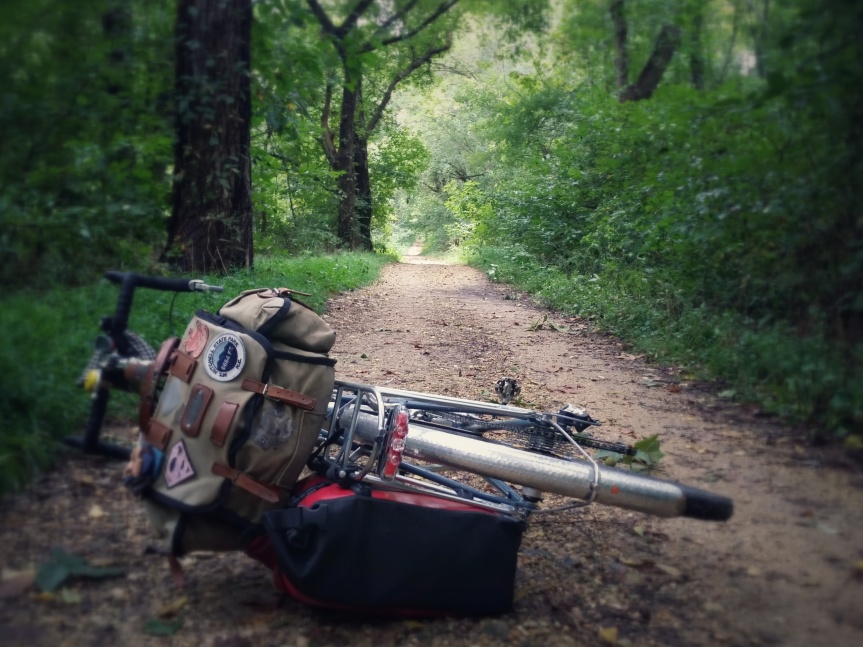 The Friday ride to Harpers Ferry, West Virginia, was a mist-filled, sometimes rain-filled, 68-mile tortoise-paced venture. I had chosen my trusty Surly Long Haul Trucker with 38mm tires for the trip, as the wider tires and touring frame gave me a sense of solidness, if not speed, along the towpath’s surface.

Even with my Surly, in many spots I felt the terrain fighting my tires, the moist ground clinging onto them rather than letting me roll. It took forever for me to reach the Spiral Staircase (slippery when wet, people) and pedestrian bridge into Harpers Ferry.

My bike was encrusted in mud, and I was wet from my head down to my squishy Sidis. I hosed the bike down, showered, and readied for the marathon.

Saturday, steady mist followed us away from the Freedom’s Run starting line and into the cool morning. About one mile into the race, the mist turned to downpour and we runners sloshed through the grass of Murphy’s Farm and back to Shoreline Road through Harpers Ferry. 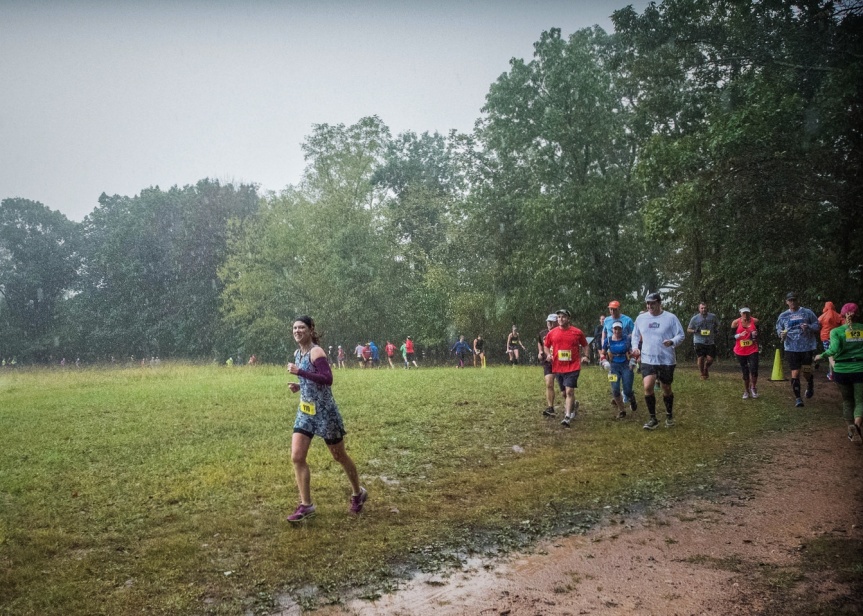 The rain abated somewhat as we crossed the pedestrian bridge over the Potomac, descended the Spiral Staircase I had climbed yesterday with my bike, and began running the C&O. Water saturated the path and runners looked for drier spaces along the grassy sides of the towpath.

I tried dodging the water for a few minutes, but it diverted unnecessary energy away from my running. I thought of how I’d brought along my Wave Riders to deal with the rainy conditions. I considered how often in life we adults have the opportunity to splash unabashedly through puddles. This was my moment.

I began to hold my line and space on the path, splish-splashing my way through. I looked over at one point, spied a pawpaw in the grass, quickly fetched it, peeled away the skin, and ate it like a Power Gel. Amazing.

Eventually the wet spots became fewer and fewer. The terrain was damp but not muddy under my feet, and I found myself motoring steadily along. I listened to my breath, and my steady respiration. All was quiet except the shimmery sound of rain through the leaves, and the patter of feet along the path.

My eyes focused on the C&O surface as I carefully ran over the next 10 miles. With the river on one side, and the trees providing canopy from the rain, I entered a state of flow. My body strong and certain of its mission, my head concentrated on each breath, my next step.

Usually, low points on a marathon happen for me around the midway point, but on this run flow propelled me blissfully forward. At mile 15, we departed the C&O and ascended up and up, away from the Potomac River and into Antietam Battlefield. My flow remained on the C&O, and I floundered, trying to recover it.

By this time the course had spread out, and I was running alone. I started having some solo conversations, like how I didn’t remember the battlefields being so hilly. Then I began to worry about how I was going to ride home the next day.

I kept wondering where my flow had gone, and why I could not appreciate my progress like before. I tried to grasp a mantra to move me along, but was unable to settle on one that I liked. Good grief, I was overcomplicating this experience. And the weird thing was that physically, I was in good shape. No physical pains or aches, just a general lack of rhythm through the hills.

My mental state improved after mile 20, and the remaining miles passed without much issue. Felkerino and my friends Kirstin and Tom were there to cheer me on into the finish, which meant a lot. Afterward, I tried to explain my run experience to them, perplexed by my lack of elation at the finish in contrast to the sensations of flow I experienced during the middle miles.

Tom and Kirstin immediately responded “Never think when you’re running!” Experienced ultrarunners, they know what they’re talking about. It was when my mind emptied of thought and I accepted the moment as it was that my run came together. Even as I write, I want to tap back into that sensation, despite knowing that this flow will only emerge unbidden.

Oddly enough, during Felkerino’s and my return trip I experienced an additional few miles of flow similar to those on the marathon. The C&O wasn’t as wet as I worried it would be (mostly!). My legs didn’t feel as bad as I thought they might (mostly!). I’m sure the ever-so-slight downhill grade helped, too.

We rode in easy silence, with me in front. The towpath’s surface wasn’t fighting the bike and me, as it had on the way out, and my Surly was once again solidly underneath my body. My legs were like pistons, firing steadily, while my hands firmly held the bars.

Again, I was completely in the moment, captivated by my surroundings. Like the marathon, the feeling didn’t last. But while it did, those miles on the C&O definitely made for a most sublime urban escape.

As always, many thanks to Dr. Mark Cucuzzella and the volunteers who stood out in the rain all day with us to make Freedom’s Run happen. I love this course, and I’m proud that completing Freedom’s Run also coincided with completing my 20th marathon!