My year in cycling was another surprise when I compare how I felt about it versus the story reflected in photos and miles. The story was far better than perception during a period when time on the bike was – like my running in 2016 – inconsistent from month to month, making for a herky jerky year.

Waa wahhhh, there are many real issues to worry about. What a lavish indulgence to opine about how 2016 could have been better in terms of my bike riding, and a joke to think that one’s life can be curated. It was a year that started and ended in good health, and I credit my daily movement by bike and on foot to much of that.

As I write this, I’ve logged over 6,300 cycling miles this year. Felkerino and I rode two 300Ks with the D.C. Randonneurs, and an incredible flèche route from Pittsburgh to D.C., created and organized by our friend Jerry. We took two weeks off in July to credit card tandem tour our way from Sacramento, California, to Portland, Oregon, averaging 94 miles each day. We even rode the D.C. Randonneurs December 200K, which I haven’t done since 2008. And now for the month-by-month highlights.

This year Felkerino and I joined a local cycling challenge called Freezing Saddles, where riders challenge themselves to ride as many days as possible (and as many miles, too) between January 1 and March 20.

Felkerino was eager to get going so we ventured out on our tandem for a local favorite – the Leesburg Loop – on an overcast, cold, and crappy day that ended up including snowfall. Felkerino tried to tell me they were flurries, but after they’d been falling steadily for an hour, I no longer believed his tale.

February: In Search of Brevet Legs

Friday Coffee Club continued at Swings Coffee, although we received news that they would be temporarily closing due to building renovations. Grrr. This photo is a pinch blurry, but I just loved seeing the collection of bikes that would pile up outside Swings every Friday.

Weekends filled with longer rides, including a lovely winter excursion to Skyline Drive with our flèche team. Skyline Drive takes on a stark beauty in winter and there are hardly any cars along it – just the trail runners, hikers, and a few roadies.

Swings closed for building renovations in March, and we moved Friday Coffee Club temporarily to A Baked Joint. A Baked Joint is a fine location, but it can never match Swings’s optimal location right off of the White House Plaza, a main artery for BikeDC commuters.

During the time that Friday Coffee Club was held at Swings Coffee, a weekly rollout tradition evolved. Felkerino called it the shortest group ride ever. After coffee, people would prepare to head off for their jobs, and we would assemble outside of Swings. We’d roll out on our bicycles as a group, ride through the White House Plaza, and then disperse.

Swings closed its downtown D.C. location in March, and this is a photo of our last Friday Coffee Club rollout – until they reopen, anyway. I loved the rollout!

I’ve heard stories of people who ride from Pittsburgh to D.C. in a weekend, but I never thought I’d have a story like that to tell.

Even though it required more logistical planning, it was exciting to ride a point-to-point flèche this year. Felkerino and I took a one-way van rental to Pittsburgh, unloaded our tandem, and rode to Connellsville, Pennsylvania, to ride our fleche the next day.

I loved this flèche: the team, the route, the unexpected gravel sections, and ridiculous weather that included snow squalls and ferocious winds in the dead of night. “Adventure!” as our friend Jerry would say.

This photo summarizes Felkerino’s and my approach to long rides this year. Ride a little, take some photos, ride some more, take photos. We didn’t have the hunger to do longer rides this year, and other aspects of life were taking more energy to manage than in previous years.

So we went with it, rode the fleche and a couple of 300Ks, and called it a day on the randonneuring scene so we could focus on other stuff. As I’ve said in the past, life has to leave a space for randonneuring, and the space wasn’t quite there for us this year. I’m hopeful we can participate more in 2017. A good long ride helps clear the head, after all.

June: For the Love of the Single-Speed

In June, work became quite busy, which was maddening because June is prime bike riding weather. Long warm days that aren’t too hot. Oh June is a lovely month for riding bikes! I often made do with taking the long way home by the Potomac River in the lingering hour of sunlight.

As I look back on 2016, I realize my single-speed – a Rivendell Quickbeam – was my go-to bike for all of my around-town riding. In previous years, I have ridden my Surly Long Haul Trucker more, but the Quickbeam has spoiled me with its comparatively springy ride. When I purchased the Quickbeam in 2005, I had no idea how much I would come to adore its lively feel and overall simplicity. We’ve become fine friends in active transportation, and I am so fortunate to have it.

Felkerino and I plotted an ambitious tour this year, taking on the Sierras and the Cascades via Sacramento to Portland. It was wonderful to ride this part of the country. I did not realize how rural many parts of this area are, and the constantly changing terrain made the riding invigorating.

We kicked off this tour with an intense 146-mile day with 70 miles of steady ascent from Sacramento to Tahoe; I wrote about it in a somewhat overwhelmed state here. There are certainly easier ways to start a tour, but we don’t like those as much, I guess.

This photo is from our morning departure out of Ashland, Oregon. I had spotted some wild blackberries a bit earlier on, and was feeling good about my tasty bike tour snack. It was a cool day, at times chilly. It rained a little later on that day, and the back roads we traveled were practically empty of traffic.

During the month of August, Felkerino and I rode a lot of pickup rides with friends. We’d start in the city and ride our way into the countryside, often around Montgomery County. It was good fun and easy company, and freeing to not worry about driving to a remote start.

During one such ride, our friend Ted suggested we stop at Edwards Ferry so that he could take a photo. The Potomac River was perfectly still, and reflected the glory of summer in its waters. I took this group shot just before we headed back into town.

In September, Felkerino and I set out on a bike overnight from Middletown, Virginia, through orchard country to Romney, West Virginia. This course is a two-day version of one of the D.C. Randonneurs’ more challenging and scenic 300K routes, “The Mother of All 300Ks.” 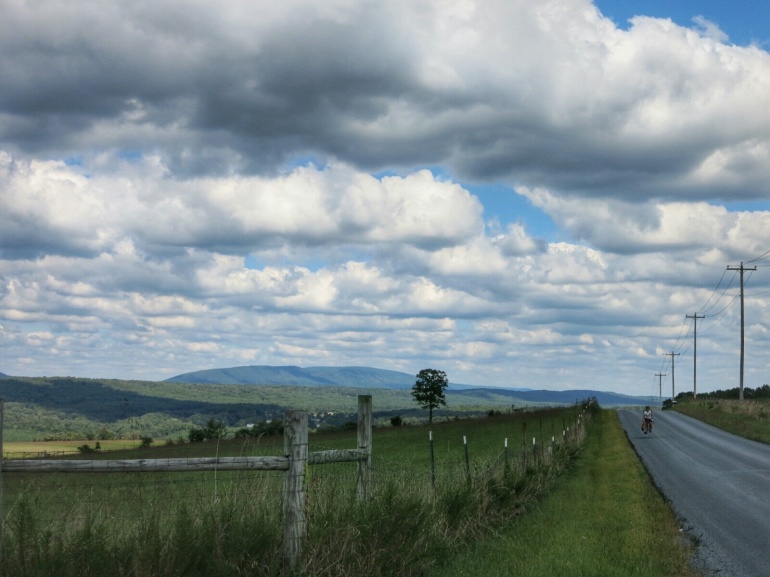 It’s such a treat to break up a ride like this into two days, as the extra time allows one to truly appreciate it, and you don’t have the pressure of the clock urging you forward. 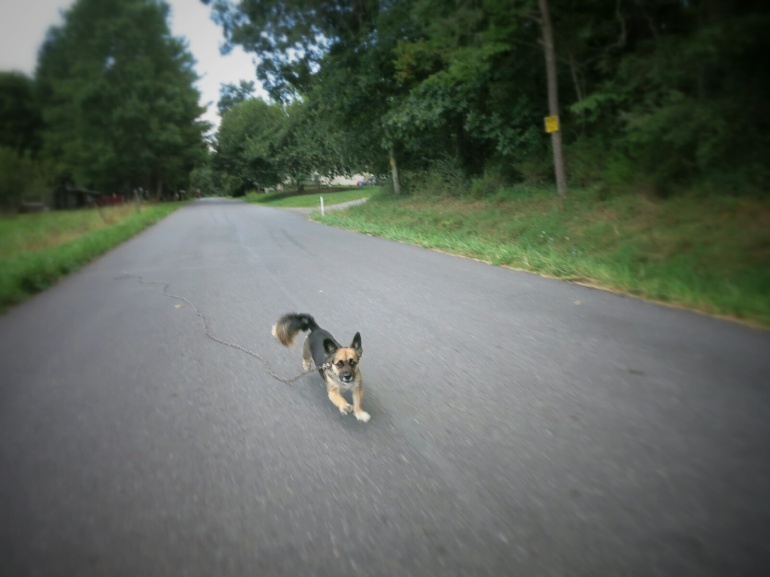 Speaking of treats, we also met this furry guy on the first day of our ride. What a surprise to look behind me and see a dog in hot pursuit, with his chain clinking along behind him. It might have been his best day ever.

Thirst for hills, peaceful roads, and fall color prompted a ride through the Catoctins with our friend Jerry. This ride exceeded our expectations. Delicious.

It’s becoming a tradition to head to Philadelphia in November for the Philly Bike Expo. Ogling bikes, talking wih bike people, examining bike gear and other doodads… it’s so much fun! We park outside the city and ride into the Expo so that we don’t have to worry about maneuvering a car downtown. This is a shot on the Schuylkill River Trail as we arrived on the outskirts of the town of Manayunk.

I don’t set mileage goals, and instead look at the types of rides I want to do throughout the year. However, around October I do look to see what is possible. This year, 6,000 miles became my somewhat arbitrary target. I met it on an early December ride on Hains Point, riding my dear Quickbeam, with the fall color still going.

Felkerino aimed high this year, and embarked on Project 8K around the same time that I set out for Project 6K. This week he achieved it on a commute home. Judd Lumberjack met up with us to be part of the occasion. Congratulations, Felkerino!

Yesterday, we had our last Friday Coffee Club of 2016, and afterward I invited Felkerino to share one more cup with me at Chinatown Coffee – one of my favorite local spots – so we could spend a little more time coffeeneuring, together with our bikes, reflecting on the good times we’ve had in 2016. Happy New Year, friends. As always, thank you for reading.