After last year’s Coffeeneuring Challenge, several people asked me about breaking out some of the information on last year’s participants. Due to [insert excuse here], it never happened.

But friends, that is all about to change! As we roll into week two of the 2019 season, here is a look back on the participated last year. (Take heed that I write this as the Nats play, so there may be some typos. I’ll fix them after the game!)

After the final count was in for 2018, 320 individuals claimed the title of official coffeeneur. This number was a 36 fewer than 2017, after a trend of steady growth. In addition, the split of men to women was approximately 40 percent women, and 60 percent men. 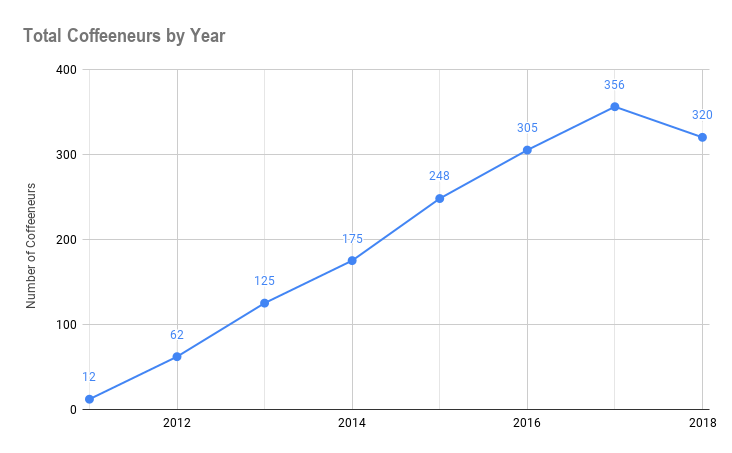 While the majority of coffeeneurs are based in the United States, the number of coffeeneurs around the world is steadily increasing. I haven’t trended data on this, but each year there is a small uptick in participants from all over the world, and I hope it continues to grow globally. Who doesn’t love bikes and coffee? 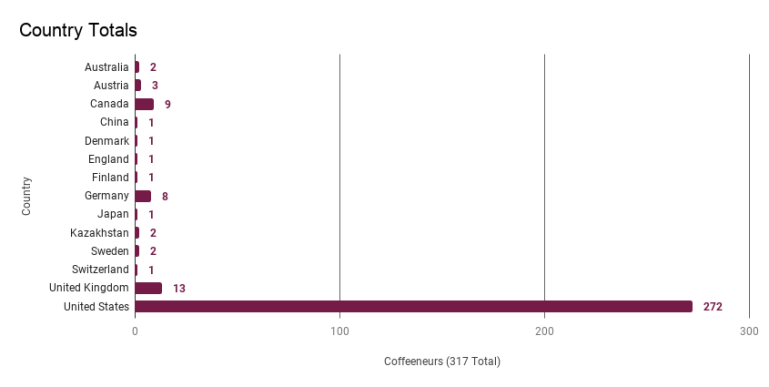 I’m limited by Google Sheets in displaying this information, so this second pie chart is not exactly what I want to display. Rather, it is to give you an idea of the number of participants by country, excluding the U.S. The percentages shown can be ignored.

The reach of coffeeneuring continues to expand, and this year we saw growth in several states. And places with some serious cold weather, too! Michigan, Missouri, New York, and Wisconsin, I’m looking at you. Good work! Texas also saw its numbers grow.

You may need to click on these charts so that you can enlarge the chart and actually see the states and corresponding numbers. This isn’t meant to be an eye test, I swear.

The chart below shows the top 10 coffeeneuring states for 2018. Virginia, California, and Washington led the way this year. I also saw a few surprises, with Florida, New York, North Carolina (what?!), and Texas also making their way into the top ten.

The number of cities participating is also growing. I can’t tell you by how much because I’m too lazy to do the exact calculations. I put together a full list of cities and the number of participants, but that chart DEFINITELY turned into an eye exam. I’ve linked it here, and hopefully you can enlarge it at home to see how your city fared. Please let me know if you have issues viewing it.

I’ve also highlighted the cities with the highest participation last year and these are in the chart below. D.C. had the most participants (I counted D.C. in both the city and state categories because it’s unique like that and I get worked up when people omit the District in state calculations), followed by Arlington, Virginia. Pittsburgh – a consistently strong coffeeneuring town – came in third, followed by Seattle.

After eight years of this event, some people have some serious Coffeeneuring Challenge streaks going. Of the 12 original coffeeneurs, six have managed to continue finishing the challenge every single time.

Another small cadre – four to be precise – have completed every year but one. Fourteen have finished the challenge six times, and fifteen have a five-time finishing record.

In 2018, there were 141 first-time official coffeeneurs, just under half of the overall total who finished the challenge.

And now, back to 2019. Keep on keepin’ on coffeeneuring! I’m loving all the energy of our eighth year of this challenge, and seeing everybody out on their bikes!