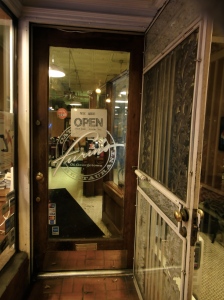 In my initial cupcake commuting post, I clearly showed that my bicycle transportation technique needed work. I received a number of helpful comments from readers about possible improvements. These included a couple of comments suggesting alternate transportation devices, one comment noting that the butter in the frosting hastened the demise of my cupcakes, one person writing that I should eat the cupcake before I get on the bike, and another individual stating “I think this demands immediate study!”

I took everyone’s remarks seriously, and set to work immediately.

I wasn’t the only one. I now have one collaborator. Thanks, Freewheel, for joining me on this difficult project.

Recently, I stopped by Furin’s in Georgetown. If you have not been there, it is worth a trip. They make excellent cupcakes and other food treats. However, I was not going there to sample the cupcakes. No, I was there to test their to-go cupcake holder.

Furin’s has two types of cupcake holders: one container stores one cupcake, and the other stashes four cupcakes. In the interest of _______ (thoroughness? impulse-buying? sugar craving?), I purchased four cupcakes. The kind manager put them carefully into the to-go container. Here they are, pre-bike ride.

I went out to the Surly Long Haul Trucker and proceeded to unceremoniously stuff the cupcakes into my pannier. 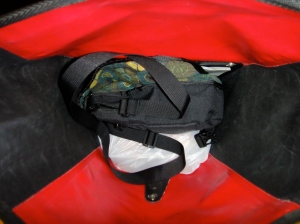 Unceremonious Stuffing of Cupcakes into Pannier

I closed the pannier and took these four cupcakes on the ride of their lives!

To fully test the container and the durability of the cupcakes, I embarked on an 11.5-mile “test ride.” It was great fun, and I could hear the cupcakes squealing with delight. I rode them by the Lincoln Memorial, the Jefferson, and even down the Potomac. Even though they couldn’t see anything, I know they loved it!

I got home, and rushed to the kitchen to see what condition the cupcakes were in after their grand adventure. Check it out. 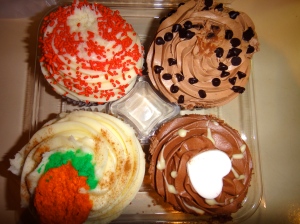 Furin's Cupcakes, after the test ride

They look pretty good. The carrot on the carrot cake cupcake is a little smooshed, but still recognizable as a carrot. In addition, the upper two (Red Velvet and Chocolate/Chocolate Buttercream ) have a little marring to their frosting. Finally, the bottom right cupcake (Vanilla/Chocolate Buttercream) looks close to perfect.

There are a few reasons I think that the Furin’s to-go experiment was so successful.

﻿﻿My friends, that does it for this edition of Cupcake Commuting. I will keep researching your other ideas on transportation techniques. In addition, please let me know if you have other cupcake places where you think I should research. Of course, they need to be within cycling distance of the District, and they should also have a reputation for being yummy. And, if you conduct your own experiment, please let me know. I’d love to hear about it, or even post it.