A surprise entry from Charlie T. is today’s guest post. Charlie is a D.C. Randonneur who I had no idea was coffeeneuring until I read a Velo Orange blog post by VO staff member and randonneur Scott G. that featured one of their coffeeneuring outings.

When I received Charlie’s “Coffeeneuring Paper,” as he called it, I brewed some herbal tea and settled in for a good read. Coffeeneuring with a little bit of everything: Bikeshare; family; friends; cool local coffee shops; the Midwest; the Mid-Atlantic; a group ride on a CaBi (!); myriad cappuccinos; and some reflecting about the benefits and beauty of coffeeneuring.

Congratulations to Charlie for his successful completion of this year’s Coffeeneuring Challenge, and to Katrin and Scott for their honorable mentions!

After Paris-Brest-Paris 2011 I heard about a gentler, caffeinated cycling adventure called coffeeneuring but I forgot all about it. In fact I didn’t ride a brevet again for over a year until the October Old Rag 200K. Setting off in 30 degrees I rode in the company of a new randonneur, Chris N. I asked how he had decided on a rando ride. He told me about a Friday morning club of coffee drinkers at Swing’s Coffee on G Street– a stone’s throw to the Old Executive Office Building. He had met Ed Felker there. He also mentioned Mary’s annual Coffeeneuring Challenge, which was already underway. This time it stuck in my memory. Hot coffee sounded pretty good that morning of the first freeze warning of the year.

I was worried about Chris. On a Surly disc long haul trucker with loaded pannier and u-lock, he looked more prepared for a coffeeneuring excursion than 125 miles with plenty of climbing. He was riding pretty hard too and I was sucking air to stay abreast of him. As a randonneur with some experience I freely, and quite sillily, dispensed with the usual advice to people new to the sport. I told him not to overexert himself early in the ride and to save some for the meanies to come in the second half of the day. I warned him especially not to try to stay with two speedsters, Kelly Smith and Bill Beck. Later that day Chris dropped me and rode on to join Bill, but not before recommending the hot soup at the last control. It hit the spot.

As soon as I got home Saturday evening I thought of hot coffee and reviewed the fine print on the Chasing Mailboxes blog. This was not going to be easy. After the day’s ride I was toast; a spin for coffee was out of the question. The next morning I wanted to sleep in, take a long bath and generally laze around. Before I knew it I’d lost that day and another week- end for the challenge. I’d have to wait for next year. The following Thursday my wife Katrin and I were flying to Minneapolis to visit our daughter Miriam, who is building homes with Habitat for Humanity. We wouldn’t have bikes.

In Minneapolis the next Saturday, October 20, Miriam told us to meet her at the Mill City Farmer’s Market downtown by the Mississippi on a square next to the Guthrie Theater, a fabulous building impaled on a giant cantilever running through its middle.

By now I’d been impressed by the large number of cyclists on the streets and the town had to have the largest number of coffeehouses per capita of any state I’d been to. Miriam had pointed out that there were bike cafes where you could have your ride tuned or pimped up while you drank fine pour-overs or French-pressed coffee.

Indeed local cyclists, she said, were hopping mad (Minnesotans drink as much or more good beer as coffee) that Portland had been named the most bicycle-friendly city in America this year. (A popular recreational activity was riding and drinking with a group of revelers on a dutch-made pedal-pub while touring the city.)

I’d noticed a station of pea-green “Nice Ride” bike share bikes a block from our hotel. It is operated by the same Montreal company as our own Capital Bikeshare. Katrin and I decided to ride a couple miles over to the farmer’s market.

It was chilly and the first order of business at the market was coffee. Two brothers were selling coffee from beans grown on their family’s Palmira estate in Guatemala. Will this count toward coffeeneuring, I wondered? Katrin snapped my picture and the quest began.

I had a delicious fresh cinnamon roll from a neighboring vendor. Looking at the calendar I realized I could miss only one Saturday or Sunday through November 11 to grab the steaming grail of coffeeneurdom. Total mileage was 20 or so, as we continued riding all over the city.

As it turns out we hopped on Nice Rides many times during our visit to crisscross the city on visits to museums, mills, breweries and, of course, cafes – if only all of them would have qualified for coffeeneuring I’d have been done in a single weekend. One of these, Sebastian Joe’s, had delicious rich homemade ice cream with arch flavors such as pothole choco named for a street cursed by cyclists.

The next morning, Sunday, I left Katrin to pack up and check out while I rode a Nice Ride to the Angry Catfish, a bicycle coffeehouse with the highest rated coffee in the town. On the map it looked close but Minneapolis, beyond its downtown, is very spread out, and two inches of map on the cell screen turned out to be many miles. On the way I had to detour around the tail-gating and cheerleader pom-poming for the Minnesota Vikings game. Some bridges over the greenway I was following were under construction, requiring more detours.

The Angry Catfish was worth every drop in my cup, though. While waiting for a cappuccino I admired Surly bikes with the fattest tires I’ve ever seen awaiting the Minnesota snows in the weeks to come, and I settled up with the mechanic for a handmade glass pendant, purchased for Miriam, with an iridescent metallic catfish on the inside. Mileage estimated at 12 including bonus miles. 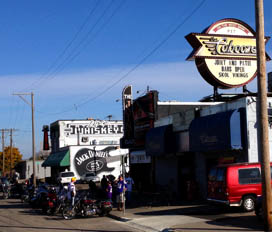 And then it was on to Duluth, Minnesota, three hours to the north and 20 degrees colder. The coffee was good there too and the hills were as steep as the streets of San Francisco. Apparently they are heated underground so that cars can climb them free of ice in the winter. Every street was connected with a skywalk between buildings – we had seen many of these in Minneapolis too, which made me wonder if you could ride across the city by skywalk.

Back in D.C. we somehow forgot to smell the coffee the next Saturday, and that added to the excitement. I couldn’t miss another week-end day. On Sunday, October 28, just before Frankenstorm arrived, I walked over to the CaBi station a couple blocks from home and rode a couple miles to Northside Social, the home to the best coffee, some say, in Northern Virginia.

The coffee is very good but I especially savored the chocolate espresso torte with hazelnuts, swishing it around in my mouth with the cappuccino froth. The baristas here are very accomplished at laying on designs on top of the foam. They usually sport intricate tattoos too.

Total mileage from home and back about 4 miles.

Saturday next, November 3, I decided to try a new coffee shop in the area, Buzz . It had received several thumbs up on Yelp for its baked goods. The pumpkin whoopee pie went down swell with the cappuccino.

One of the benefits of coffeeneuring is the discovery of new places and faces and Buzz was one of them. Total mileage about 3.

Until Sunday, November 4, all of my rides had been by bikeshare. That is no accident. Thanks to Capital Bikeshare I’ve rediscovered this year the joy of jumping on a bike in street clothes and not having to don bike shoes and helmet. Now I go to the library, Trader Joe’s, doctor’s appointments, you name it, on a CaBi.

I hopped on a CaBi at the station across the street from FreshBikes in Arlington and joined in one of their monthly Tuesday night 15-mile group rides. It is quite hilly but the three speed is geared low enough to make hills easy.

Unfortunately all of my rides had also been alone which diminishes some of the pleasure of coffeeneuring. The conversation that goes with the coffee, for example. But Sunday the 4th I managed to entice the fellow who got me hooked on randonneuring, my friend Scott Gater, into joining me for a 30-mile ride to the National Harbor on the Mount Vernon trail.

Our ride included a stop at Java Shack in Arlington. Strangely, even though I am an Arlingtonian and a cyclist, I had never been to this community café, a favorite among cyclists and a place where most of the locals know the baristas. For many years Java Shack has also sponsored Arlington’s cycling team Squadra Coppi. Now Scott takes his coffee seriously. He gave my cappuccino a hard look. The cup is way too big and you have more foam than coffee. But Scott’s company that morning, the catching up with each other while riding at a conversation inducing gait, was great.

By the time we got to the National Harbor I discovered I’d forgotten to capture my cap on camera. So back I went for another one, properly sized I think.

Scott was sold on another ride. We thought about the Flatbread 200K the following Saturday, November 10. A coffee-seeking ride afterwards would not feel celebratory. It would feel like obligation. And then there was the rising at o’dark hundred. Compare that with sleeping in again, meeting up at 10:00 am in Germantown – “you mean when it’s warm outside,” said Scott – and riding 30 miles to Beans in the Belfry in Brunswick, MD. I was sold. It is a magical place, a coffeehouse inside of an old church with all the stained glass intact, a pew alongside plush chairs, a balcony for a choir, and great pecan pie to go with my cap. Again there was too much foam, but fun it was!

You’ve earned that coffee and coke in church.

Down to my last day, Sunday, November 11, it was back to the CaBi, and this time Katrin joined me for a 6-mile ride into DC to a serious coffeehouse, Filter. It had received Scott’s stamp of approval.

I ordered a 10 oz. pour-over of Ethiopia Yirgacheffe ECX. According to the menu, I was in for “a complex cup with notes of apricot and flowers, a honeyed sweetness, and silky mouthfeel with tea rose and perfume aromatics.” While I can’t say I discovered all of that in my cup of joe, I did learn serious coffee takes time; the cup was 10 minutes in the making. Total ride distance 13 miles out and back.

Slowing down and taking time out to appreciate life is a key part of coffeeneuring, I think. Too many cyclists, especially on the club rides I go on, roll at one GU-fueled speed all year round.

Real fitness, mental and physical, comes from varying the speed. Coffeeneuring definitely fits into my fitness plan. And the coffeenées are chances to spend time with loved ones after the many times you’ve been away on randonnées. It can be more expensive than randonneuring, though. By the time I’ve tucked away a slice of pie and a coffee with an extra shot of espresso, and then another coffee because I forgot to take a picture of the first one, I’m way past the entry fee to a D.C. brevet.

Yes, it is true that coffeeneuring can run up a higher tab than a brevet, but most times I find it more pleasurable than gas station dining!

Thank you again, Charlie, for your thoughtful (and thorough!) writeup. Hope to see you on a ride again soon.