Earlier this year, Felkerino’s and my new tandem arrived from Co-Motion. Some of you may remember that  a crack developed in the stoker seat tube of our previous tandem, a Co-Motion Speedster, which required either a mend or a replacement frame.

We ultimately chose to replace the frame and, rather than another Co-Motion Speedster tandem, Felkerino and I decided on a Co-Motion Java, which is their 29-er frame.

Co-Motion worked out an arrangement with us for the new bike which was primarily financed by the sale of my 1996 Nissan Altima.

That’s right. I sold my car to buy a tandem. Righteous bicycle purchasing!

Co-Motion describes the Java as an “ultra-rugged” bike, and its tubing is beefier than the Speedster with clearance for larger tires. When I first laid eyes on the bike, its ultra-ruggedness intimidated me.

The crazy clearance on the front fork reminded me of the jaws of an alligator. The tubing had me wondering what type of riding Felkerino had in store for us.

Since that time, we’ve (alright, Felkerino has) been meticulously building the bike up and dialing it in to suit the kind of riding we plan to do– primarily randonneuring, touring, and dirt road riding.

The past three weekends we’ve taken the bike out for longer training rides on hilly terrain (106, 92, and 93-miles, respectively) not just to shake down the bike, but also to build our base fitness and prepare for the upcoming spring bicycling events we hope to do. And because tandeming is fun. Most days.

There’s a lot that goes into dialing in a bike. First, the fit. Saddle height, setback, and handlebars must be tweaked just so.

Fenders must be installed. At least, if you’re Felkerino or me, that is something you must do.

These pink fenders got the thumbs down from the captain, as Felkerino insisted on metal fenders that were not pink.

Persistent fender rattles have to be fixed or no one will want to ride with us and I will eventually lose my mind.

The fender rattle battle waged on and on in the Dining Room Bike Shop until Felkerino finally drilled a hole for two bolts on the stay, as you can see in the photo above. Rattle battle over!

After you add fenders, you also want to be sure to affix any custom leather mudflaps your friends have made for you. Thanks, Alec.

The ideal front bag should be installed to coordinate aesthetically with the bike and, more importantly (I suppose), to allow the captain to easily access all the essentials he wants at the ready.

I say the Berthoud is too little for our burly new bike. How about this Sackville?

Other miscellaneous wrenching must occur at various points during a tandem ride. 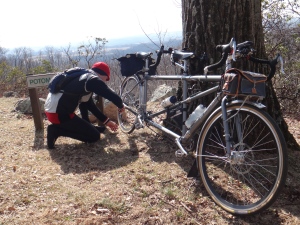 Ideally, said wrenching will occur in a sunny spot.

The initial hesitancy I felt about the Java’s rugged look has dissipated and when I ride it, aside from still being impressed by the size of the top tube, I don’t detect a particularly slower feel from it. If anything, the Java is a lively ride and DEFINITELY far more responsive than the dear old Lead Sled we used during the interim.

I still miss our Speedster, as it was a beautiful bike that was also the first tandem to fit me perfectly. However, I am pleased with how the Co-Motion Java is shaping up, and have no reason to doubt that the Java’s fit will be any different, as it was also custom-sized for Felkerino and me. I’ll report back more fully after we’ve put some brevet miles on it.

In the meantime, I’m going to check on Felkerino to see if he has changed out the front bag again.