A Return to the Single Bike Lifestyle 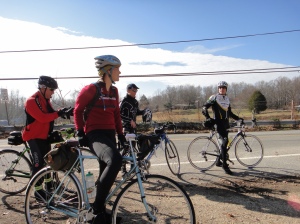 A weekend century on the Rivendell Romulus (c) Felkerino

This past year, we retired our custom-fit Co-Motion tandem. It wasn’t by choice. Over the six years we had owned it and an estimated 25,000 miles, it gradually developed a crack in the area near the stoker seat tube. Felkerino wrote a post about it complete with a photo of the crack, here.

As you can see in the post’s photo, the crack was located right at the stoker seat tube weld. I’ve been trying not to take that too personally. Co-Motion diagnosed that the crack emerged because the weld was not strong enough and we have since been working with them on a replacement tandem.

For a while we rode our back-up tandem, a Cannondale mountain frame also known fondly as “the lead sled.” I wrote earlier this year about the differences between the Co-Motion and the Cannondale. Aluminum versus steel, 26-inch versus 700C wheels, and a significantly shorter reach for me on the Cannondale.

The Cannondale tandem on tour this summer

This short reach became a problem on rides over 80-90 miles, primarily in my shoulder zone and lower back. I felt hunched and as though my shoulders were squishing my pectoral muscles. I called it the Quasimodo effect.

Additionally, as rides exceeded 70 miles or so, I would begin squirming in the saddle, as my lower back sent me signals of discomfort. Because of the shorter reach, I could not stretch out enough over the bike to distribute my weight well, and I think these two areas of my body were doing more than their share to support me.

The lead sled works well on gravel road rides, and the fit is fine for rides less than 80 miles or rides where we will do a lot of standing. However, it is not suited to being a brevet bike, especially when Felkerino and I both have single bikes that are extremely comfortable and carry us over brevet distances in a pain-free fashion.

Enter the Rivendell Romulus, which has now become my primary weekend bike. I had mixed feelings about this at first. I’d become accustomed to riding tandem on weekends. While I ride a single bike almost daily, it is usually for rides shorter than 50 miles.

Almost all long rides (centuries and longer) over the past few years have been on tandem. As a stoker, I like having someone to block the brunt of the elements. I could take both hands off the bars and reach freely into my jersey pockets. If I wanted to delayer, I could easily do so since I wasn’t steering.

Mostly, though, I just missed our sleek and elegant Co-Motion. It fit me so perfectly. I missed putting my head down on rides and gazing down at the beautiful burnt orange top tube. Felkerino and I had gone on many spectacular rides and tours with that bike. 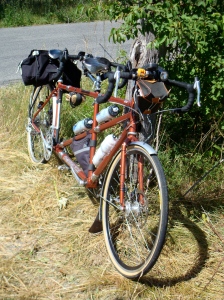 It was harder than I ever imagined to say good-bye to the Co-Motion. Riding my single served as a reminder that I would never ride that bike again, and that initially bummed me out.

Am I being melodramatic? Yes, a bit, although I now see how people become attached to material objects. A tandem that I thought was beautiful, fit so well, and represented so many good memories has been a tough thing to leave in the past. 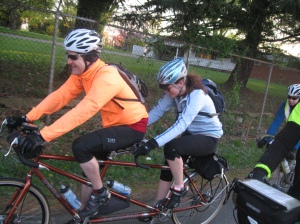 A couple of months have gone by since Felkerino and I started riding singles again on weekend rides, and I’ve since adjusted to and embraced my return to the single lifestyle.

The Rivendell Romulus is a beautiful bike, too. When I settle into the saddle and reach for the bars, my back stretches out happily and I feel at ease and confident.

I have total control of the bike, and don’t have to worry about synchronizing my movements with Felkerino (although he reported that we do stand simultaneously, even on single bikes). Steering, shifting, and braking are all in my hands now.

Pedaling away on the Romulus (c) Felkerino

Climbing hills is a treat, as it’s just me and my little single on the grade, as opposed to Felkerino and me hauling our cumulative weight. The Campy Ergo shifting is smooth, and comes in handy if I want to shift while standing. I do have to take the brunt of the cold, but I’ll take cold skin and watery eyes over back and shoulder pain any day.

With the exception of figuring out how to dig into my rear pockets and unwrap my food while wearing gloves, read a cue sheet, and keep the bike moving forward in a straight line all at the same time, I’m doing pretty well.

I can also see Felkerino’s face, as opposed to looking at his Camelbak all day. We can ride a few pedal strokes beside each other, or take turns being in front of each other. I find that a refreshing change.

Felkerino and the Atlantis

When I ride tandem, it’s difficult for me to discern how much of my effort translates into the tandem’s movement. Riding a single bike gives me an opportunity to assess my conditioning and effort, as 100 percent of the bike’s forward momentum comes from my pedaling. I can see improvement in my leg strength and endurance over the last two years and that boosts my confidence as a rider.

I can’t wait for our new tandem to be built up and road ready, but in the meantime I’m reveling in the new-found freedom and routine of my single bike lifestyle.