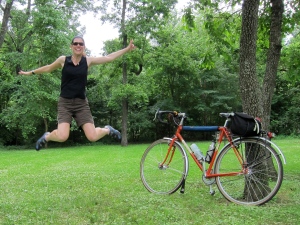 I never used to take photos during bike rides, but over time I realized that I like having a tangible memory of a day in the saddle. Nothing can replace the actual experience, but it is nice to have a photo to help recall rides gone by.

I’ve developed an affinity for stopping at some point on my bike ride and taking a picture of my bike. My bikes have done so much good for me that it seems only fitting to feature them in the landscape.

As I started taking more photos, I also learned about the camera’s auto-timer feature. If a spot looks right for it and I feel like stopping, I will set up a self-portrait of me with my bike.

Self-portraits of standing or sitting beside my bike gradually evolved. When I waited for the auto-timer to go off I became fidgety, filled with an urge to jump.

That urge first became a portrait last year on the Blue Ridge Parkway. Felkerino and I had stopped for a break from all the climbing. In a goofy yet tired mood from all the Parkway climbing, I set the auto-timer and jumped. 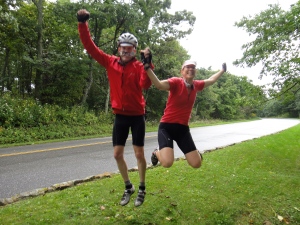 Jumping is a joyful act, I concluded that day. Our jump gave us a mini-reset on our dispositions and renewed us for more riding and climbing.

I also concluded that that jumping portraits while on a bike ride are even better with the bike in the picture. After all, it’s the bike that allowed you to get there in the first place.

That’s how “Bike plus Jump” portraits came to be. I practice them sporadically. I don’t always take them. Everything has to come together for one to happen: my mood; the weather; and the spot. There also has to be a stable place to set the camera if I’m alone, since I don’t carry a tripod and that’s part of the art of setting up Bike plus Jump photos.

Jumping is an enthusiastic expression, and well worth a try on your next bike ride. I’ve set up a flickr group called Bike plus Jump so that you can share your results and see others’ jumping feats. If you don’t have a flickr account, but still want to share your Bike plus Jump photos, email them my way to gersemalina “at” gmail. 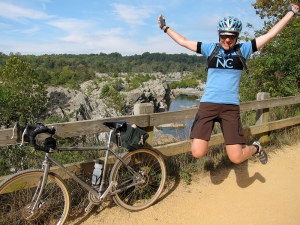 My own Bike plus Jump portraits have met with mixed results so far. I have no technique for capturing a good jump except to say keep on jumping until you get it right. The photos that turn out are guaranteed to make you smile and take you back to the moment when the picture was taken.

Conclusion: Bike plus Jump– do it!