Day Four of the government shutdown and for the second consecutive day I called on my Excepted Intermittent Bike Friday Tikit. It was cowering in a corner, licking its wounds from yesterday’s century, trying to be invisible. No doubt I had ruined some trust between us. 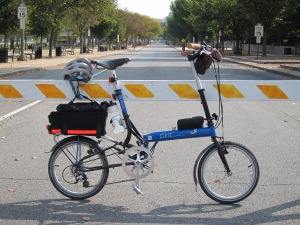 “Tikit, you gotta give me another chance,” I said in what I hoped was a cajoling tone. “Today will not be like yesterday, I promise.”

We rolled away from home with Felkerino and his Simple One, pedaling easily on downtown streets. The Tikit seemed wary, but hopeful.

Three miles later we paused at Swings for #FridayCoffeeClub. The Tikit sighed with relief. 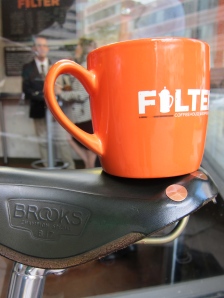 Next stop was more coffee at Filter, a half-mile up the road. A quick errand to pick up a couple of things and to make me feel like a productive human being, and down to the National Mall we went.

The roads flanking the Mall are barricaded so no motorized traffic is passing through… except for the stupid segway tours. Nothing stops them.

I don’t know that I’ve ever seen it this quiet. While it’s nice that the Mall’s side streets are closed to cars, this much downtown quiet on a weekday gives the city an eerie feel. I like the city to have some bustle to it, and that is definitely not the case right now.

For some reason, the Enid Haupt Garden at the Smithsonian was open. It was peaceful on the garden grounds. Normally, the garden is a frequent cut-through for pedestrian commuters and it is a popular spot for tourists.

I realized that lots of people, including tourists, are avoiding the downtown area. That’s totally understandable. Why go downtown where all the museums are when NONE OF THEM ARE OPEN?!

Anyway, back to the garden… I could sense the Tikit relaxing among the flowers and green space, finally trusting that I might be true to my word about today’s ride being different than yesterday’s. 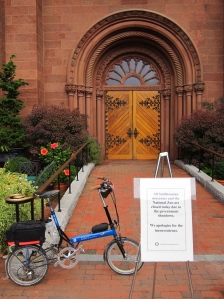 The Tikit loved the Enid Haupt Garden. It requested that I take some touristy-type photos by the Smithsonian Castle. Say cheese, little Tikit!

We even posed for a shot of us together during a contemplative pause at the Moongate Garden.

While there, I encountered a tourist who had come to town to enjoy the city while her husband attended a conference. She summed up her D.C. experience as “depressing,” and said she could not wait to go home. I was glad to hear that it wasn’t just the furloughed locals who were in a shutdown funk.

After speaking with her, the Tikit and I departed the garden for a brief loop around the Capitol. I paused halfway up the hill to give the Tikit a break from climbing and some respite from the sun. I did not want it to experience any stress on this day. We did not linger long because, really, what’s going on at the Capitol?

We headed quietly home, both the Tikit and I having enjoyed our peaceful seven-mile urban excursion together. That’s the way you’re supposed to ride an Excepted Intermittent Bike Friday Tikit.