I first participated in Freedom’s Run Marathon in 2009, its inaugural year. I remembered loving the course — the way it rambled around Harpers Ferry, traveled along the C&O, and eventually crawled away from the Shenandoah River into the beautiful, hallowed, and hilly place that is Antietam Battlefield.

I even liked the mileage loop out and back to Murphy Farm Overlook, although it can be a little crowded on the relatively narrow footpath. It’s a good spot to watch the sun come up.

I returned to Freedom’s Run this past Saturday for the second time. It fit well into my eventure scheme and I wanted to know how, if at all, the run had changed.

The course is as spectacular and scenic as ever. The rolling hills in the battlefield have not become any less rolling, and the vistas the course offers throughout are remarkable.

It’s the only marathon I’ve ever run that requires me to descend a staircase (the Spiral Staircase, as many of us know from our rides out that way), and one of few where the course spreads out quickly and such that you have plenty of time for contemplation. Freedom’s Run is a rare treat, and if you ever have a chance to do it, you should.

Participation appears to have grown some, although a look through the results showed that fewer than 500 people completed the marathon this year. I think Freedom’s Run draws people like me, who are looking for a scenic event with a small-town feel, and it also appeals to out-of-towners who want to run a marathon in all 50 states.

There is not a lot of fan support, but there are enough people out and about cheering and volunteering that I never lost the feel of being in an organized event.

Water stops were located every three or so miles, negating my need to carry water, although I generally like to bring my own bottle so that I am not wasting plastic cups. All in all, Freedom’s Run is a well-organized event that travels an interesting route and maintains low-key informality. 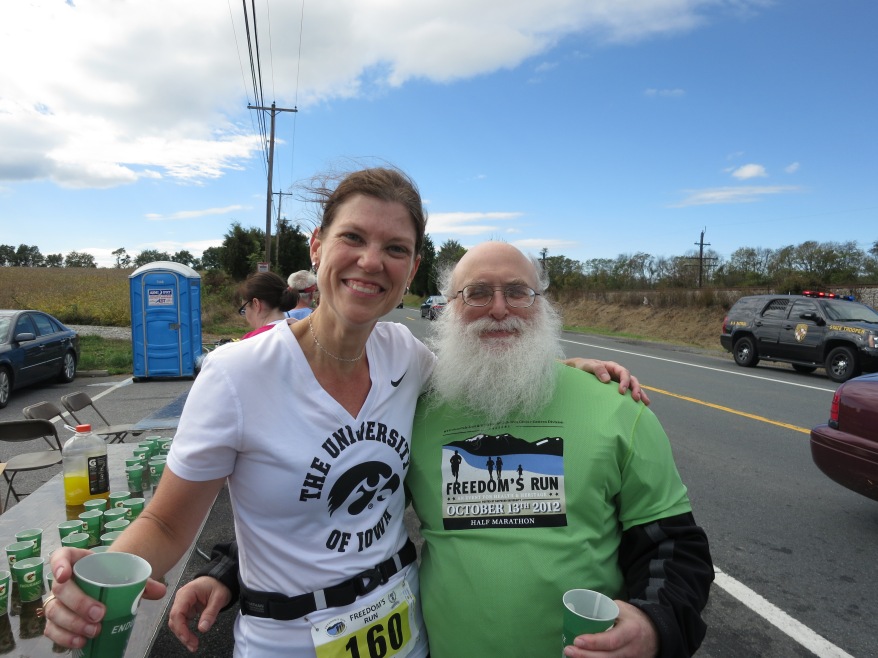 The runner’s life: volunteers, drinks, and a port o’ potty

At 6 a.m. I departed my hotel for the marathon and proceeded to lose myself in the campground down from the hotel en route to the start. I thought about returning to the hotel and bagging the run, figuring if I was stupid enough to lose myself in a KOA that maybe that meant I didn’t deserve to run this day.

I sought help from my friend and fellow runner Kirstin who was waiting at the run’s packet pickup. She remote controlled my sad self to where I needed to go. Thank you, friend!

The run began and after running with Kirstin for a bit I was on my own. The small field quickly spread out and this gave me plenty of time with my thoughts. Just me and my thoughts, thinking together.

“What shall we think about, thoughts?”

“Let’s think about whether this bike-run-bike combo is a very good idea!”

I pitter pattered along the C&O, contemplating my life choices.

My thoughts and I bantered and concluded this was not a good idea. Note: this conclusion was reached around mile 15, when nothing seems like a good idea. Most everyone has their marathon low points and recently mine have come around then.

At the time, I thought my low point was at mile 13, but it turns out that I had lost count of the miles I’d run. Mile 15 showed up and I realized I had experienced a marathon miracle! 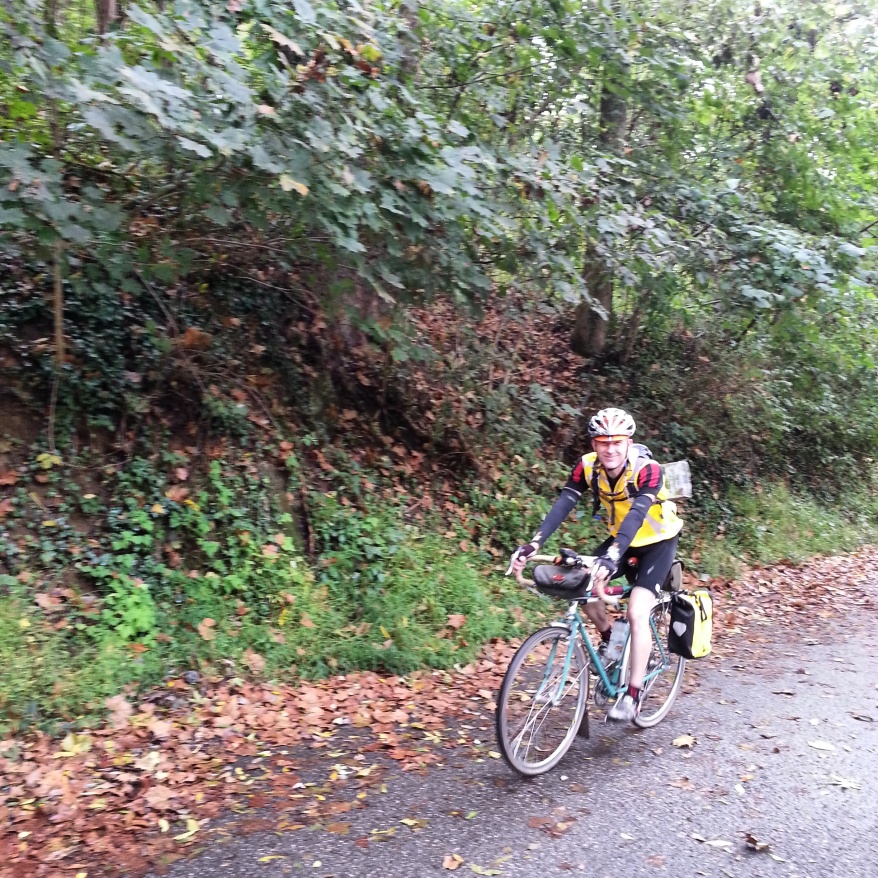 Around this time Felkerino rode past me on his Atlantis, and he then kept me company for the next three miles or so. That was fun and his presence, encouragement, and picture-taking lifted my spirits.

And then… Antietam. Felkerino had taken off to coffeeneur in Shepherdstown so I was running solo. I did not mind that at all, though, because running through Antietam is amazing.

The terrain constitutes big scenic rollers and as I said, there is something holy about that place. I took a few photos with my cell phone, and ran/walked along while savoring my time there. 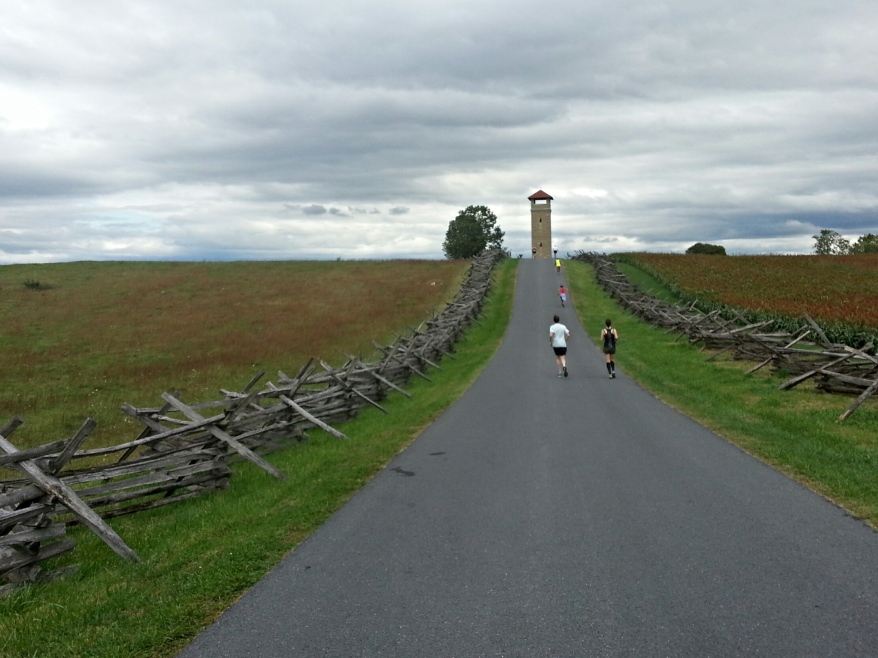 Felkerino met me again at mile 23, and we talked for a couple of minutes before I set my mind to finishing. I dutifully plowed my way to mile 26.2, and finished in what I believe is my second slowest marathon time ever.

Oh well, I still earned a t-shirt, a medal, and a commemorative pint glass for my effort. My body had the normal aches and pains after a long run, but overall I felt good.

The mental game had proven the most difficult, as I was unsure how a 67-mile bike ride the day before would affect my running in addition to thinking that I had to save enough energy for the ride back to D.C. on Sunday.

Kirstin and me at the finish

Many thanks to Kirstin and Tom C., Felkerino, the weather, and the volunteers for making Freedom’s Run a great way to spend 26.2 miles in West Virginia.

And thank you again, Kirstin, for getting me to the start line after I lost my bearings in the campground. Next time I’ll know better! Maybe!

And now, we return to our regularly scheduled Coffeeneuring Challenge programming…