Lots of us ride to coffee (or tea), but only during this seven-week sliver between October and November do we officially coffeeneur.* Coffeeneuring is when bike rides to coffee (and other beverages) are shared and enjoyed by people far and wide.

Why should you think about joining the Coffeeneuring Challenge? Here’s what some of the participants from last year’s edition had to say:

“Since this was my first coffeeneuring experience, I find it easy to relate it to riding a flêche where everyone is out completing their own rides, but we are all sharing in similar experiences. The idea of knowing others around the country were participating in the same activity motivated me to get out and ride!”
Steve in Burtonsville, Maryland

“It was great fun checking out new coffee places that I otherwise would probably not have visited, if not for coffeeneuring requirements.”
Cruisin’ Downhill, Edmonton, Alberta Canada

“Thanks for organizing this important community-building activity! It’s gratifying to a part of such a force for good, peace and harmony in the world.”
Andy’s Bike Blog Seattle, Washington

“I look forward to it every year – gives us an excuse to just ride somewhere and visit over a cup of coffee.”
Lynne’s Mostly-Cycling Blog, Portland, Oregon

“Thanks so much for the motivation to keep the riding going even as it gets cold here in Western Maine.”
Christine in Bethel, Maine

“Family coffeeneuring is a great deal of fun. Sure, the mileage is a bit less (okay, an order of magnitude less), but it’s a great excuse to get the kids out even when the weather is less-than-perfect.”

Dan B. in Pittsburgh, Pennsylvania

“We had such a good time connecting with other riders! Thanks for putting this together.”
Jennifer T. in Leavenworth, Kansas

“I had a great time biking to new places, taking photos and drinking coffee. It was like all of my hobbies rolled into one :)”
Joe Flood, Washington, D.C.

“Drinking coffee (or at least hot beverages) is a great unifier for cyclists from all walks of life!”
Will in McLean, Virginia 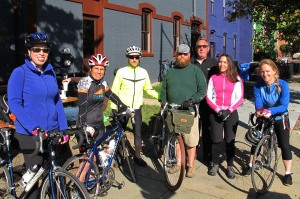 Four years ago, the number of people who finished the Coffeeneuring Challenge totaled 12. In the three years since that time it has grown to more than 100. We’ll just see where we end up in 2014. In the meantime, let’s go #coffeeneuring!

*MrTinDC, thank you for the pics!