I started riding when I was 7 or 8. On a trip to the county dump with my dad, we found a gem of a purple bike in the heaps of trash and took it home. He fixed it up, my grandpa spray painted it pink, and I was off!
–Zoe

I first met Zoe through the D.C. Randonneurs, I think, or maybe it was Friday Coffee Club. A fellow Iowan, last year I watched virtually as Zoe set out on a solo bike tour from Virginia to Illinois. Never having solo toured, her journey intrigued me. I asked if she would be up for talking about her tour as well as other cycling-related issues. As you can see, she agreed. Thank you so much, Zoe, for being part of the Women BikeDC series. Your solo tour and independent spirit is truly inspiring to me.

Tell me a little about yourself and when you started riding.

I started riding when I was 7 or 8. On a trip to the county dump with my dad, we found a gem of a purple bike in the heaps of trash and took it home. He fixed it up, my grandpa spray painted it pink, and I was off!

Since then I’ve always had a bike, and used it semi-regularly, mostly as transport, except for a two-year stint in New York City.

When I moved to Washington, D.C., in 2010, biking became my primary mode of transport. It’s also my way of getting out of the city and having fun.

What sorts of things do you do by bike?

Until this year, I hadn’t had a car for 8 years, so everything! Commuting, groceries and other errands, friend dates, no-hands dance parties, Christmas tree shopping, taking pies to potlucks, etc.,

Oh and I also rode my bike to Illinois last year for a wedding.

How has riding a bicycle influenced your life?

As an adult, riding a bike has allowed me to have daily opportunities for child-like joy that I might not otherwise make room for. A bike commute is dedicated time where you are really in your body, and experiencing and interacting with the world around you. You can be playful on a bike and have fun.

Last year, you went on a solo bike tour, which was quite exciting to follow. What motivated you to do it and how did you plan it?

Yes, last year I rode my bike from Lexington, Virginia, to Cave-in-Rock Illinois, which is just over the western Kentucky border. It was about 750 miles total.

I was inspired to do it mainly through boredom and frustration. I’d been unemployed for about 6 months, and was planning to go back to school so I was no longer looking for a full-time job.

I also had a wedding to go to. I didn’t really want to buy a plane ticket so I jokingly said to someone that I should bike to the wedding and it just snowballed from there.

I bought several sections of the TransAmerica route maps through Adventure Cycling and talked with a friend who had done a solo tour. I had already done some bike camping and I had gotten a touring bike the year before with the intent of doing more. I had some of my own gear already, and I had friends that I could borrow the rest from.

For about a month, I babbled to my friends about why biking several hundred miles alone and camping alone was probably a terrible idea. I had a long list of the various disasters that could happen, but the conversations always ended with a, “but maybe?”

Eventually the disaster narrative became boring too, and I realized I’d bumped up against a challenge that was scary in just the right way, so I hopped on the bike and went.

What was it like to tour by yourself? Did you ever experience loneliness?

I was certainly afraid of loneliness before I left, and I think there were a couple points– mostly where I was extra hungry, or lost, or tired– when that welled up a little. But it didn’t last long because here I was out doing this really cool thing by myself. How badass was I?

Plus I was on the TransAm route, so I ran into other bikers occasionally. I shared a campsite with a couple recent college graduates once and stayed in churches with other bikers, shared meals.

I’d hear about other bikers along the route and look out for them. There was kinship among bikers, and kindness from strangers: a woman pulled over on a country road to give me a peach and talk; a man bought my breakfast one day and just said, “Have a good bike ride.”

Occasionally, when I was stopped for a break, someone would approach and start talking to me. A few times, I realized I was hearing a story that the person had never told anyone before but that was deeply important to them. These were sacred moments, so I just enjoyed being with these strangers and listening to their stories before moving on down the road. What a gift!

What, if any, concerns did you have as a woman touring solo and how did you deal with them?

Before I left, safety was my biggest concern. I’d never travelled alone before and never camped alone. On the whole I felt pretty safe. That said, I made choices that male cyclists didn’t have to make. I met a lot of people who were “stealth camping.” But I did not feel safe doing that so I paid for all my campsites, and slept in churches when I found ones that welcomed bikers.

The most unsafe I felt was at a state campground in Kentucky. It had been a really hard day and I had no more energy left in my legs. There was a family – a dad and his two adult sons who were camping across from me. They just stared at me for a long time. It was really unnerving.

Then one of them came and sat on a bench right next across from my tent and just watched me, didn’t say anything. I spoke to the camp hosts, who didn’t think I had anything to worry about. So I was trying to decide whether I could confront the guys, or if needed to pack-up and bike to a different campground when these two young men, recent college graduates, rode up on their bikes and asked me if I’d be willing to split my campsite with them.

On a good day, three people would ask me if I was afraid of being raped or, suggest that this was a likely possibility, and comment on my appearance and how that must put me at risk for rape. Men and women. It was tiring.

Any lessons learned from your tour, or things that you would do differently next time?

I would probably not choose to bike through Kentucky again. I’m glad I did it, but between the coal trucks in the eastern part of the state and the packs of dogs that I encountered throughout it put me on edge. If I do bike that state again, it wouldn’t be alone, and I would carry dog spray instead of pepper spray.

I did find that getting off my bike and talking to a scary dog like it was a puppy usually helped a situation, but it feels risky because if the dog is really mean, then you have to hop back on the bike, and try and take off on a fully loaded unwieldy machine. Yikes!

Other than that, I’d prefer to carry less stuff but I’m also not sure what I would have eliminated. 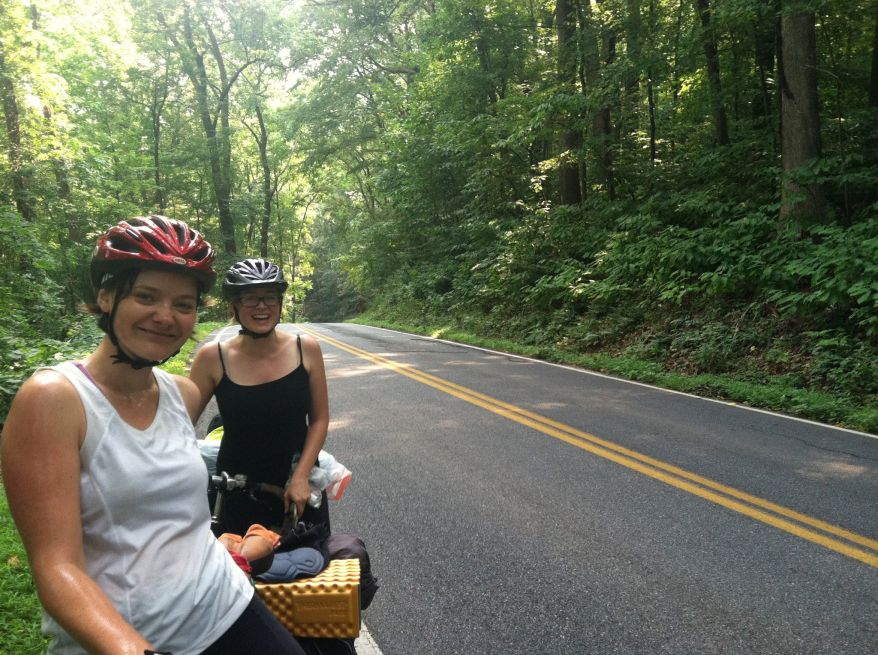 What do you think prevents more women from riding bikes?

I think that many people have forgotten that riding a bike can be fun! It can be scary to bike in the city, and you have to feel confident to do so.

Then there’s logistical hurdles to get started, thinking about how to maintain a bike. You get your first flat and maybe you don’t know how to fix it and it’s a hassle to get it to the bike shop.

How do you carry all your work things, and show up at work looking professional and not too sweaty? Let’s be honest, these are important things for women to think about, because they are held to a higher and more fluid standard when it comes to professional appearance.

How does it feel to be a woman riding in the D.C. area, where we are less than 26% of the riding population?

Honestly, when I’m on my bike, I don’t really think about it. I notice it more in bike shops, where I have sometimes been talked down to by male mechanics. That’s the kind of thing that will stop me from frequenting a store in the future, but I’m also trying to be better about speaking up when this happens.

I have really appreciated the mechanics at The Bike Rack and BicycleSPACE who have taken lots of time to talk through repairs and explain things to me. I have also appreciated doing hands-on repairs with assistance from volunteers at The Bike House.

Tell me about your bikes, especially your touring bike. What adjustments did you make to it so that it was bike tour ready?

I have two bikes. The first is a 1985 Fuji Espree, which one of my Aunt’s bought new. She used it to commute from a farm outside of Tipton, Iowa, to her job at a natural foods warehouse in Iowa City, which was about 25 miles one way if I remember right. She’s a total badass.

I found the bike with disintegrated tires in her basement and got permission to fix it up with my dad. I feel really proud to have put in many more miles it.

My other bike is a Samuel Hillborne, which is made by Rivendell. I had wanted a touring bike for several years and had test ridden one of these in Boston. It was the most comfortable bike I’d ever ridden. It was also way out of my price range, but I still couldn’t commit to anything else.

In 2013 I found a used one in my size on Ebay. To prepare for the tour I got a bike fit, put on a new saddle, stem and handlebars and added a front and rear rack.

This bike is the most beautiful thing I own, and I’ve not done a good job of keeping it in mint condition. But riding around on this fancy machine that I’ve chipped up and gotten muddy brings me so much joy. 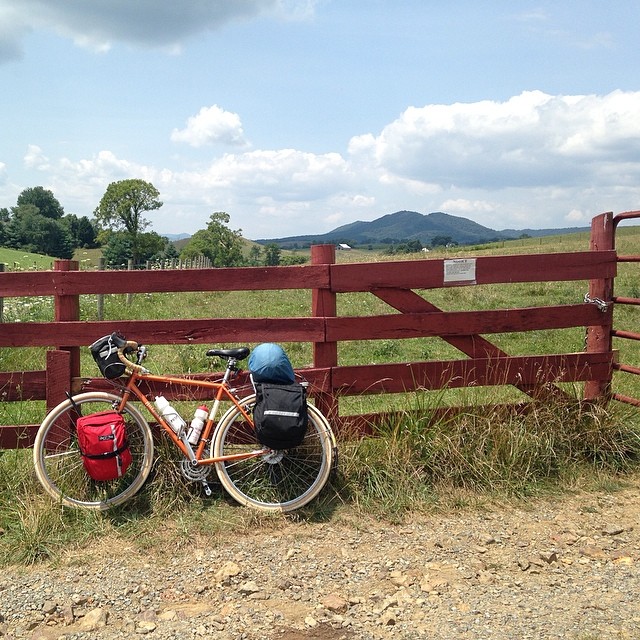 Which bike accessories do you consider must-haves and why?

Mostly just a rack and panniers. I avoided this for a long time, but it makes a huge difference.

On my tour last year, I borrowed a handlebar bag that had a map holder. It was my favorite and most useful thing on my bike.

What word or phrase summarizes your bicycling experience?