Riding in Search of Weak Spots

Some randonneurs maintain brevet fitness throughout the year, but I haven’t managed to achieve that. When September arrives, I ride for fun, and run myself into shape for a fall marathon or two.

Winter weather tempers my riding ambitions. It’s just not as glorious to ride around the countryside through various shades of winter browns and grays while hands and feet throb in protest.

With a March marathon behind me, and the calendar noting of the arrival of spring, I was out of excuses for not riding long. Felkerino and I agreed that if we were serious about riding brevets this year, then a long-ish tandem ride was in order. 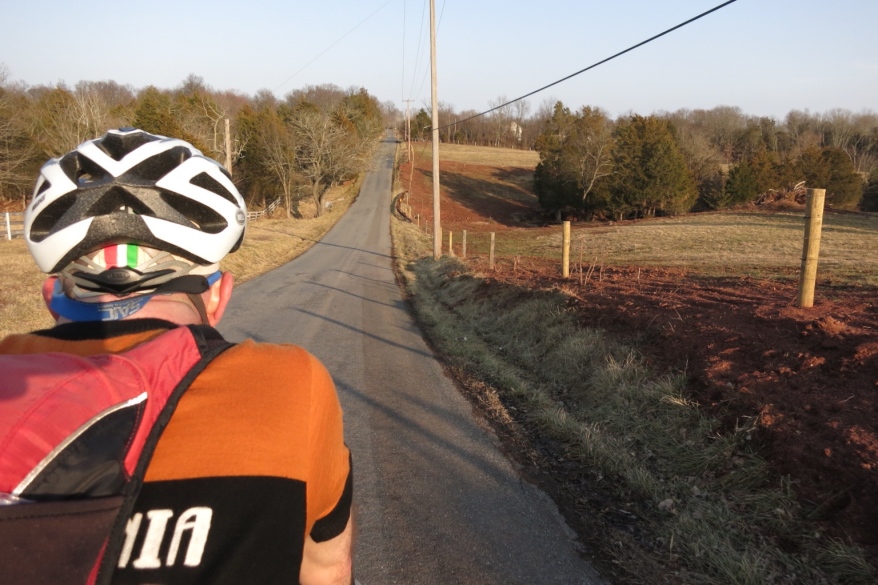 We call these early season rides training rides, although more technically I suppose one could call them whatevering rides. We set an ambitious but not unreasonable distance and roughly scope out our route. Then we ride until we’re done.

March whatevering rides are all about acclimating our bodies to all-day saddle time, figuring out the weak spots in our fitness, and remembering what it’s like to ride the same bike.

Training rides present an opportunity to refine the rando setup and take stock of what the bike needs. We revisit the state of the extra tubes and the tools stored in the side pockets. We dig into the bottom of the bag to see what forgotten treasure might have been left. (My favorite Ibex hat? Thank you!)

We remember how the Carradice starts out mostly empty and then fills with layers shed throughout the warming temperatures of the day. Booties, heavy gloves, jackets. As a ride continues past sunset, the layers gradually re-emerge. Like a multi-act play or a Madonna concert, a whatevering ride can require a few wardrobe changes.

We’re reminded that it’s important to exercise good rando habits, such as closing the Carradice bag each time we open it. Otherwise, a favorite vest might tumble out somewhere on the road and be lost forever. It’s one thing to do such silly things in the city, where it’s easier to retrace steps, but on a rando ride? Forget about it.

Saturday’s ride was a 115-mile loop from the District to Brunswick, Maryland, and back. Some flat, plenty of rollers, and a decent amount of climbing for the day without being punishing. A good early season whatevering, er, training ride.

Some sections of our route (especially the suburban ones) gave Felkerino plenty of practice with pothole dodging. Maybe this could be a new form of eye test that optometrists use for cyclists. Avoid all potholes and you don’t need new glasses. 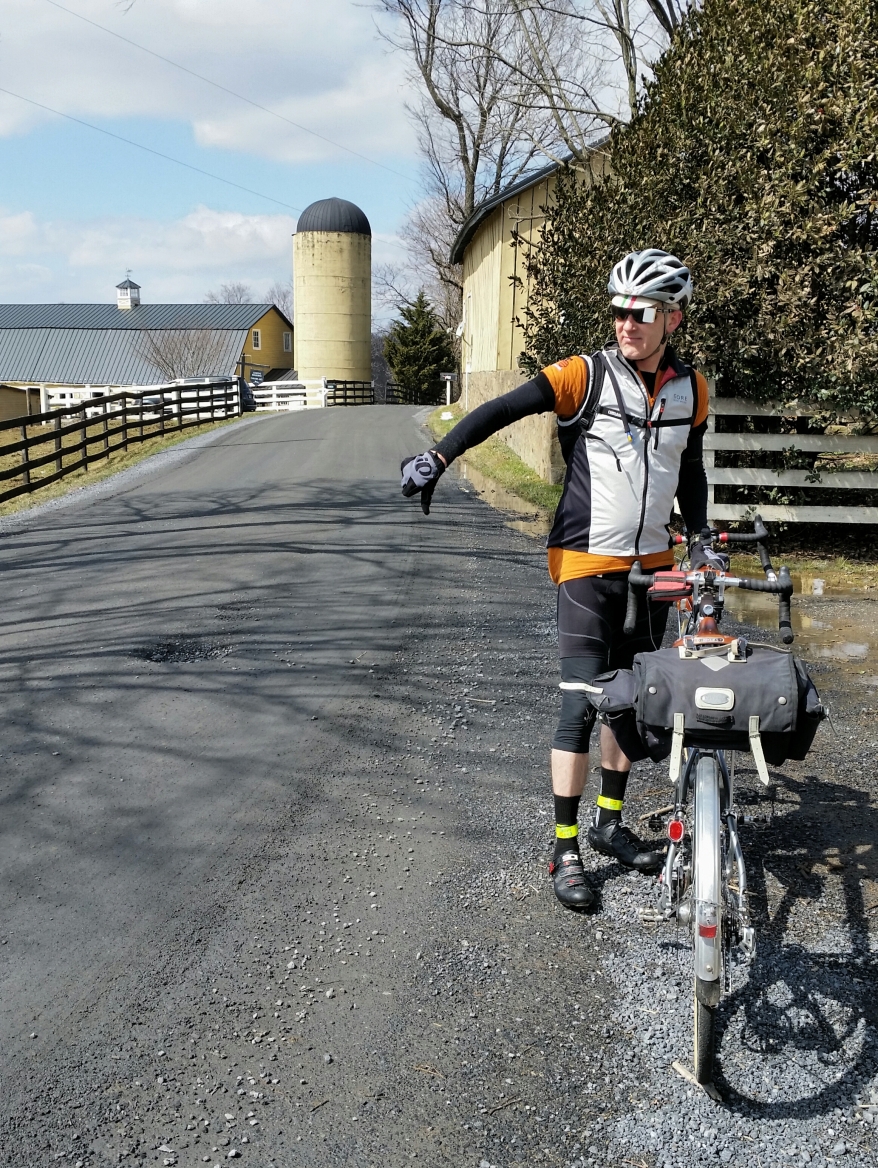 Our ride went smoothly, if you discount the slowly leaking tire we managed through much of the ride. We were rooting for our rear tire to make it through one more ride, but it was oblivious to our encouragement and continued to plague us with a slow leak until we found a good tire replacement spot, and swapped out worn tread for new.

Randonneurs can be weird. We probably should have replaced it when we first noticed the issue, rather than try to nurse it along. We imagined we were saving time by not changing the tire, but we were really delaying the inevitable.

My legs were not fully recovered from last week’s marathon, but they felt okay. Felkerino probably had to do a little extra lifting for the team on the hilly segments, but he knew what I’d been up to the week before and didn’t seem to mind.

The day offered several pleasantly warm, sunny hours. Oh how long it’s been since my toes felt toasty on a ride. This also aided our disposition during the late-ride tire change, too. It’s a luxury to change a tire in weather where your hands don’t freeze. 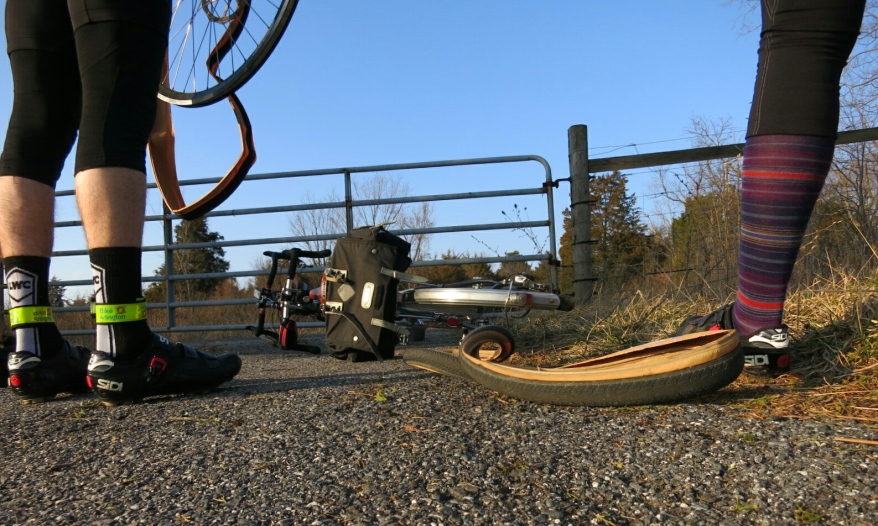 Even though my legs lacked the snap I would have liked, we physically made it through with no issues and in good spirits. Our rolling average was lower than it usually is during peak riding months. We took more breaks along the way than we would during a brevet, but completed our agreed-upon route without shortcutting or moaning and groaning.

A new vest has been ordered and we’ve restocked our tubes and spare tire supply. We’ve sketched out additional whatevering rides. I’m finally in a state of anticipation about the brevets.

The early spring warmth and late afternoon sun of Saturday made us believe that spring is coming. The grass is seriously contemplating an emergence, as are the early spring buds. I can feel it.

More whatevering rides through the hills, a little tweaking here and there but not too much, more disciplined time in the saddle, and we will have sorted out our weak spots. Add in a few more sunny days in the 60s (is this too much to ask?) and we’ll be brevet ready.