Sometimes when conditions conspire to limit my ability to be outdoors, I turn to the stories of rides gone by for inspiration. Today I’m honored to post one such story, Theresa Furnari’s 2015 recount of riding Paris-Brest-Paris (PBP).

As I read “Bon Courage,” I remember the dedication and tenacity one needs to take on a ride like PBP, the anxiety of unexpected challenges, and the thrill of the ride experience.

Thank you so much, Theresa, for sharing your story with us, and to Gardner, for the photos that capture your ride.

Amongst the many endearing cheers from the French citizens was “Bon courage.” It was my favorite for it accurately stated what it took for the two of us to successfully complete Paris Brest Paris 2015.

The first of our impediments occurred four days before we were to depart. As Gardner was opening a drawer, its facing separated and dropped onto his big toe. The toe immediately swelled and was painful to the touch. Eventually the nail died and was nearly ready to come up. Although he was able to ride, it remained painful and vulnerable to any amounts of pressure.

Nevertheless, we arrived in Paris on a Thursday under bright sunny skies. Our home for the next two weeks would be a fifth floor walk-up apartment in the Montmartre section of the city. The bike check was scheduled for Saturday so we spent the next day-and-a-half exploring parts of the city and various restaurants.

On Friday, although Gardner was unsuccessful in finding a bike shop that could do a minor repair he needed done, we rode to the Arc de Triomphe, the Champs-Élysées and the Gardens of Tuileries. It was so fun to ride through the city on our bikes. Saturday, we packed our bikes as if we were riding PBP and rode the 18 miles to the Velodrome Saint-Quentin-en-Yvelines.

The velodrome served as the beginning and end of the ride. Organizers predicted 6,000 riders from 60 different countries, with 11 percent said to be women. En route to the velodrome, we were able to ride through the Gardens of Versailles and see the Chateau of Louie the XIV. The opulence and immensity of the grounds suggested some reason for the French citizens’ opposition to the government in 1789.

We waited in line at the velodrome for the safety bike check and sought out some bike maintenance after I learned my front derailleur had bent in transit. Although it would take a few times for the very patient mechanics to make the adjustments, I left ready for the beginning of the ride on Sunday.

Sunday, August 16, was another beautiful day and because our start time was not until 7:00 p.m., we had all day to sit and worry about PBP. Instead, we met for lunch in Paris with a friend of Gardner’s. It was the best way to pass the time– be with friends, eat and drink wonderful food, and talk about something other than PBP.

After walking Scott to the train station, we packed up our bikes and set off again for the velodrome and the start of the ride. Start waves were staggered every 15 minutes apart depending on your designated letter. It was so interesting to chat with riders from countries all over the world before the ride start. 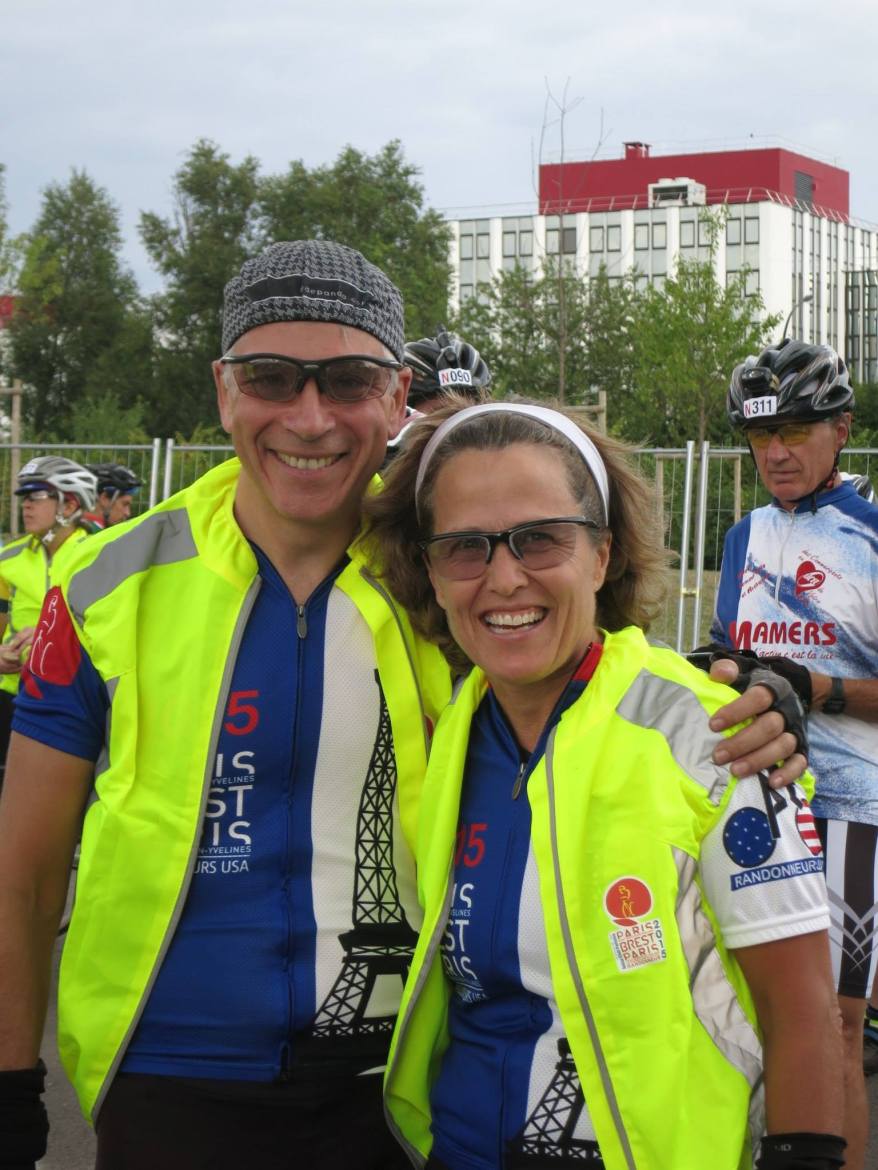 Our group went off at 7:00 p.m., but not without a small incident. A few minutes before the start, Gardner’s bottom bracket had come loose. So out came the contents of the Revelate bag to get the tool, tighten up the bracket and repack it all in time to be off on time.

The start of the ride was unforgettable. The streets were lined with residents, wishing you “Bon voyage!” “Va vous!” “Bon Courage!” It was so emotionally uplifting to experience this level of support.

And once people saw that I was a woman, the cheer was both more vocal and more personal. It appears PBP is still primarily a man’s sport, so women participants are welcomed warmly and loudly.

Motivated by this outpouring of support, a cool night, surrounded by other riders and a beautiful countryside, the stop into Mortagne was fast and easy. Under the cover of night we rode to Villaines. During the day, we cycled through Fougères, Tinténiac and Quedillas.

Oftentimes, towns were located on the top of a hill of some elevation. Generally we traveled up the hill to get to the center of the town and cruised on a curvy downhill to leave the town. In the towns we were often greeted by children seeking high-fives as you rode past.

Throughout the route, we saw residents of all ages who — regardless of the time or day– wished us well, directed us to the course, and offered us food and drink. I don’t recall ever drinking as much coffee as I did on this ride.

In part due to the location of the towns, the controls were also situated at the end of grueling climbs, so the cheers of support was especially appreciated. Often, the loudest cheers came from Angie (Mike Wali’s wife), her friends Ed and Kathy, and Shab (Hamid’s wife).

We arrived into Loudéac a little behind our planned pace at about 7:30 p.m., but we were feeling good. We had time to eat, rest, and shower before our planned departure 5.5 hours later at 1:00 a.m.

However, we were unable to locate our hotel as I had left the voucher back in Paris. After a few hours and with the help of Angie, who was kind enough to drop our bag off at the hotel, we arrived into our rather primitive hotel room.

Expect the Unexpected: Loudéac to Brest

We had planned to use the room as a staging point for charging our lights, but the room had no functioning electrical outlets. We learned this after Gardner attempted to plug in a power strip only to blow out the lights for the entire apartment building. With so much going wrong, we did not get to bed until 11:30 p.m.

When our alarm failed to go off at 12:45 a.m., I woke up in a panic at 1:30 a.m. Packing up as quickly as possible, we left the hotel and wandered around the city for a few minutes to find the start area. We were finally on the road at 2:05 a.m.

Knowing we needed to travel the 49 miles to be in Carhaix before the closing time of 7:33 a.m., we maintained a steady pace and arrived in Carhaix in 4 hours. Still running too close to the closing times and under the impression we had to be in Brest before 40 hours (or 11:00 a.m.) we ate a quick breakfast and left.

It was during this leg that we experienced our biggest climb, the Roc Trevezel, a 2.5 mile uphill. And it was here that I was happy for all of the climbs we rode in the States. The Roc Trevezel was hard, but nothing we had not experienced before, and the downhill was long and steady.

We arrived at the control in Brest at 10:43 a.m. Once we learned that our actual closing time was 2:23 p.m. we took a well deserved break and enjoyed a pizza and chocolate mousse. 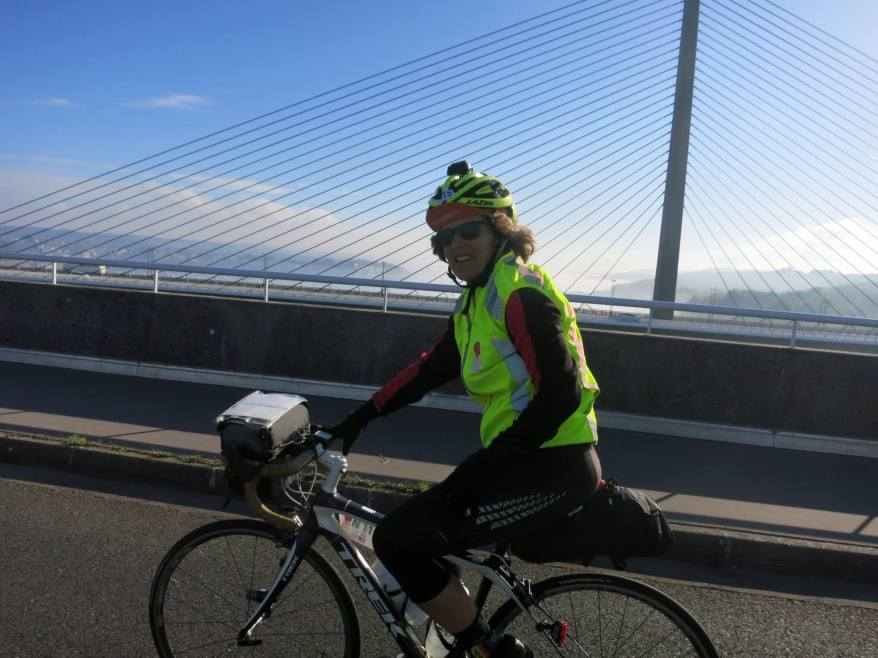 The leg from Brest to Loudéac was the most memorable, but also the hardest. All of the long downhills leading into Brest now became long uphills. And we were getting tired. We both took part in the ditch naps that we had witnessed many other riders make earlier.

Since such a variety of rest stops were used, I was not too surprised to see in one town a rider curled up in a telephone booth. During one of our ditch naps, I listened to a group of Irish riders singing a traditional song as they passed us.

Ditch naps will get you through. Photo credit Gardner Duvall

Despite our long days, it was amazing to continue to see residents cheering us on. One little girl around 10 years old frantically rode her small bike down a side road to reach the route, and leapt onto a stone wall and to cheer us on. We saw patients from a rehabilitation home all seated on the road to cheer us on.

On another section, an amputee sat alone and encouraged us with a strong voice. And so many small children and elderly residents cheered us on with such enthusiasm. We made good use of the D.C. Randonneurs pins that we had brought along as souvenirs, we gave them out to all of these individuals and others along the way.

Our pace had slowed, in part caused by a strain in my Achilles heel, and we arrived back in Loudéac at about 11:30 p.m. After a quick meal, shower and 90 minutes of sleep, we departed for the next leg at 3:11 a.m.

Crepes and Coffee Will Get You Through: Loudéac, Vilaines, and Mortagne

We were behind our set pace, but we hoped to make up time along the way. Concerned about our late start, we pushed hard to Tinténiac, arriving a few hours before the closing time. We had breakfast and took a short nap.

The leg to Fougères was fun because we rode it in daylight and experienced the immense fortress in Fougères, which appeared to consume most of the town. It was also there that Gardner was able to obtain a grilled sausage and beer in a neighborhood shop.

We felt a bit more comfortable with our pace, and stopped to eat wonderful crepes at La Tanniere for the price of a promise to send a postcard from Maryland. I also received my first “French” kiss, from a small child of 5 as we chatted with his mother while enjoying a cup of coffee.

We arrived in Villaines to a hero’s welcome and were treated to table service by the children of the town. I felt embarrassed by such an outpouring of support, and it motivated us to continue on.

We rolled into Mortagne at 12:00 a.m. after a boring final twelve miles, which I was convinced was a loop meant to drive us crazy. Now 88 miles remained and they proved to be the hardest. 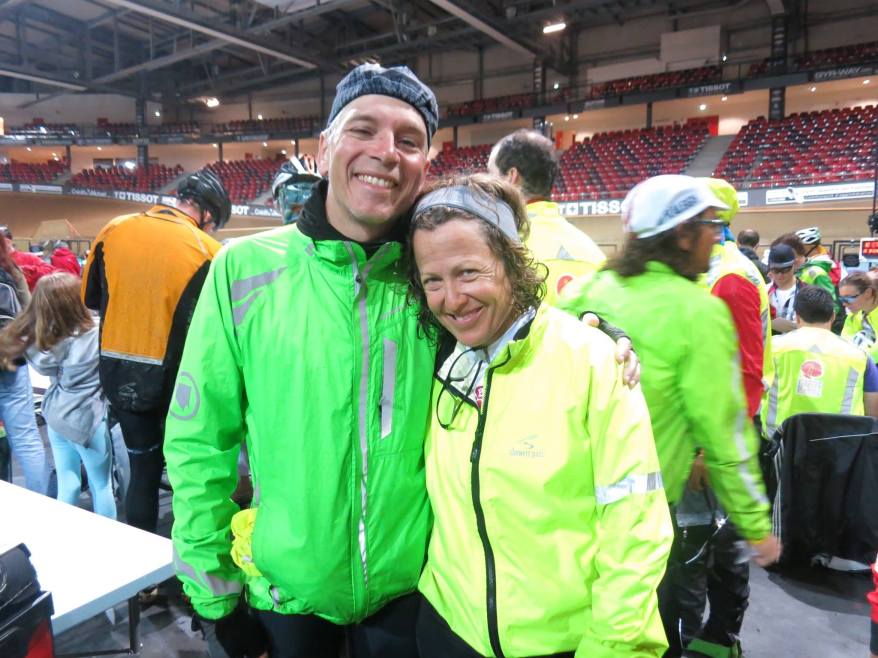 The Finish! Courtesy of Gardner Duvall

In Each Rando Ride, Some Rain Must Fall: Mortagne to the Finish Line

Gardner and I had lost each other in a town on the route after leaving Mortagne, and we pedaled on with hopeful plans to meet up in Dreux. En route to Dreux, my left thigh muscle tightened up and it was only by keeping the left shoe clipped in that I was able to continue to pedal.

In Dreux, it began to rain and did not let up. We were also now out of ibuprofen, as I had been consuming two every four hours for several hours. Both of our knees and ankles were on fire, and Gardner’s toe was causing him additional pain.

Nevertheless, after breakfast and waiting out the rain by chatting with old and new friends in Dreux, we left in the rain for the last 39 miles determined to finish. At this point it was purely mental determination and courage that caused us to push as hard as we could.

With the ride now behind us, but the memories still fresh and exciting, we can now say “Bon courage” to all those who participate in this most unforgettable experience in the future.