As my blog staff compiles results, I’m taking a few posts to share some Errandonnee participants’ adventures who chose to share their stories, not through Twitter or blogs, but through their control card or narratives.

This week features BikeDC friend and errandeur Eric P., who tells a lively story of how the Errandonnee helped foster his transition to utility cycling and lessons learned along the way. Thank you, Eric, for your fine write-up and for letting me share it!

By way of background, I am primarily a recreational cyclist. Most of my riding, and the focus of my riding, has been on weekend rides with friends and clubs. I backed into bike commuting as a way to keep in shape and squeeze a few more miles in, but I treated the commute like a workout, even using a fixie, and would not describe myself as a utility cyclist.

I tried the do the Utilitaire last year, but just could not force myself to change my head-down commuting routine to work in the errands. This past year, though, my weekend riding tailed off some and my commuting miles increased substantially, and I began to realize I was more of a utility cyclist than I thought. I also began to tire of treating the commute like a workout. I decided to buy a full touring bike to use for commuting so I could take it a bit easier and hopefully do some touring on the weekends.

As it happened, MG announced the Errandonnee just a week or so after I picked up the new bike, so this was the perfect storm to force me to shift my focus on the bike from distance and speed to something more practical and relaxed. Still I was reluctant, and hesitated to even try the Errandonnee because I was just not sure I could cover the categories. My problem is that most of the errands I run are either downtown near my office, or simply too far to ride to or otherwise impractical.

In addition to the rules laid down by MG, I made a few of my own. Primarily, I wanted to force myself to use the bike for errands, not just tack errands on to rides I would otherwise do. I decided I would not count my long weekend recreational rides, even though they almost always involve a stop for coffee or lunch.

I also decided I would not “double count” my commuting rides. For example, I would not count a trip to the dentist if I rode my bike to work as usual and then went to the dentist during the day. And if I stopped at a store on the way home from work, that ride would count only as a trip to the store and not also as a ride to work. Given my normal patterns, this upped the challenge for me.

My first “Aha!” moment that made me realize I could do this was on Feb 11. I needed to go to the D.C. Court of Appeals to get a Certificate of Good standing from the D.C. Bar. My office is directly above a Metro stop and normally I would take the Metro. But I was staring out the window and saw the Capital Bikeshare stand at K and 17th Street and realized I could use a CaBi and not have worry about locking my bike.

It was a hoot. The CaBi bikes are heavy and clunky, and I worked up a bit of sweat on the way back, but it was a lot of fun to ride in street clothes. I felt like I was getting away with something by sneaking out for a bike ride in the middle of the day. In my giddy excitement, however, I forgot to take a picture so all I can offer is a photo of the receipts from CaBi and the Bar.

I did one other Errandonerrand on a CaBi to meet friends at Roti near Metro Center. This time I remembered to take a picture of the Inauguration reviewing stand being dismantled. Now I think of CaBi as an alternative to Metro or walking, so that in itself is worth it.

After that, it got easier. I was able to do another midday Errandonerrand to BicycleSpace on my regular bike to get a bell. As it happened, that day was warm — near 50 — and it was just a hoot to ride my bike in street clothes through downtown. Again, I felt like I was playing hooky or sneaking out for a beer, and came back to office feeling like I had to hide my grin. The weather must have gone to my head because I forgot my camera and again had to resort to an after-action shot or two.

I also shifted my weekend errands to cover a bit more ground on the bike instead of walking or driving. On Saturday, February 16, I did a short loop through Takoma Park to go to the bank, the hardware store, CVS, and the liquor store. 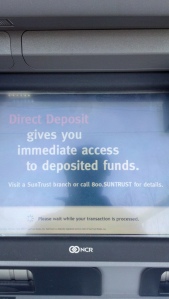 Normally I would walk, and maybe drive to the liquor store, but my rack and panniers let me carry a few groceries, wine, etc., and I felt like these routine errands were a bit of an adventure instead of routine. 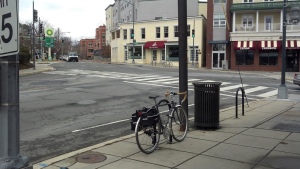 I also scared myself as I rolled out from home because the sidewalk was strewn with clear crystals that I thought were broken car glass. After about 50 feet of crazy weaving I realized it was salt strewn in anticipation of the nonexistent snow. I need to stop thinking so much.

That said, I think my really local errands are better off the bike. While the bike is a great way to cover a few miles efficiently, just riding the few blocks to my local shopping area meant I was not stopping to talk to neighbors or seeing birds and plants in the yards.

The logistics-to-distance ratio was also “upside down.” I spent a disproportionate amount of time locking and unlocking the bike, and calibrating purchases based on what I could carry. I think I prefer walking such a short distance to allow for more spontaneity.

On the other hand, my ride to the Safeway on February 19 was perfect. About a three-mile round trip, I ordinarily would have driven, and it was much more fun and healthier (for me and the planet) to ride instead of drive. I am not sure I could do a full week’s worth of shopping on the bike, but for just a few things it was perfect.

That day was a busy Errandonneuring day all around. First I rode into work for a few hours in the morning. It was a pleasant afternoon so I took advantage of being home in the daylight to run two more errands. First a quick ride up the street to the dry cleaners and then a ride to Safeway for a few essentials.

I also counted two trips to work, and converted rides home on other days into errandonerrands with a stop at the hardware store one night and Sticky Fingers bakery for vegan treats for Suzanne on Valentine’s day.

Of course, shifting my focus to utility riding was not without its fits and starts — or, as the French say, Errandonerrors. I came to realize that I am not well equipped to carry delicate things like cupcakes in my panniers.

Luckily, the taste held up better than appearance and Suzanne enjoyed the cupcakes, and laughing at me too. I have a front rack on order and am intently shopping for a good bag so hopefully that won’t happen again.

Also, I am not a compulsive photographer and more than once forgot to take a picture, meaning I could not count the ride at all or would have to improvise by taking a picture of a receipt and/or the purchases or, if I caught myself, circling back to get the picture.

I also realized I had to rethink necessary gear, like locks. I normally don’t carry a lock on weekend rides and I leave my lock at the office for commuting, so I never have think about the lock. When I went to the Safeway I forgot the lock and did not realize it until I was almost there. So back home I went for the lock, and then back to the Safeway for the Errandonerrand. Luckily it was a nice day so I was happy for the bonus miles, but still a bit frustrating.

I also missed a few easy Errandonerrands by not fully changing my thinking. It was only when I got to my destination that I had a “Wow, I coulda had a V-8” moment and realized I could have biked instead of Metroing. Obviously I have more mental work to do to make myself areal utility cyclist.

All in all, the 2013 Errandonnee was a lot of fun and helped my broaden my cycling imagination. That is a per se good thing, so thank you MG for the push!