I’m back with the second part of my year-end post, a month-by-month set of photos. For nine of the 12 months I feature one photo that best represented the month, but three months warranted more than one.

As this is a personal glimpse at how I saw the 12 months of 2013, all photos that follow are ones that I took throughout the year.

Our new Co-Motion Java tandem arrived at the beginning of the year, and we were eager to return to tandem riding and check out the feel of our new tandem. The Java is no dainty bike, with its mighty tubing and intimidating fork. Initially I wondered what we were thinking by replacing our Co-Motion Speedster with this burly tandem.

One of our first shakedown rides with the Java was a well-known local favorite, the Leesburg Loop, which starts in the District, goes out to White’s Ferry, and returns through Leesburg and the W&OD Trail.

The bike turned out to be comfortable with a solid and responsive feel. As we continued to put this bike through its paces, I realized that we had made the right choice by purchasing our Co-Motion Java tandem.

In February I hosted the Errandonnee, a winter cycling challenge all about doing errands and getting things done on your bike. I thought it might be a fun way to keep the winter blahs at bay.

This is a photo of Felkerino documenting his outing to a movie with me, which I believe qualified under the “Wild Card” category.

After all the errands were tweeted, blogged, and otherwise documented, 65 people successfully completed this challenge. The Errandonnee is perfect for bending the rules and the tweets were hilarious. Thanks to everyone who participated. I hope to continue the Errandonnee in 2014.

Felkerino and I participated in the annual WABA Vasa Ride for the first time this year. I really like supporting and participating in WABA events. My entry fee goes to a good organization, and the local starts and varying ride lengths bring a variety of local cyclists together.

The Vasa Ride begins and ends at the House of Sweden and the prize for completing it is a steaming cup of blueberry soup that really isn’t blueberry soup but some other berry that tastes and looks like blueberries to me. The cool temperatures and cloudy skies the day of the Vasa Ride made our finishing treat extra tasty.

This photo is from the WABA pit stop at around mile 20. This photo makes me smile and is a tangible example of how WABA brings local riders together.

Cyclists who commute regularly around the Tidal Basin have a front row seat to the cherry blossoms. We watch the little pink buds appear and each morning and afternoon we inspect their progress. Cyclists get the unique experience of riding directly beneath a canopy of white and pink, cherry blossoms extending as far as the eye can see.

Mornings are the best time to visit the blossoms as the city is still just waking up and you don’t have to do any tourist-dodging. I never tire of seeing the trees bloom and Felkerino and I try see them as much as we can while they are flowering. 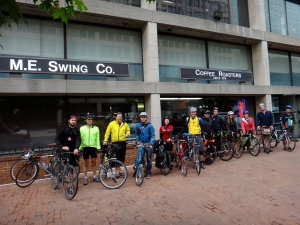 Because my work schedule has changed it is now more difficult for me to attend Friday Coffee Club. However, I made sure to attend on May 24 because our #BikeDC friends Crystal and Adam were leaving D.C. and starting on their cross-country trip and move to California.

Crystal and Adam chose to make Swings and Friday Coffee Club their departure point. It was a festive occasion complete with coffee and cake as we celebrated Crystal and Adam’s big journey. I saw more than a few of us looking wistfully at their panniers and camping gear. Some day.

In June we accompanied our riding friends John and Cindy on a two-day, 255-mile tour from Middletown to Monterey, Virginia, and back. John and Cindy were gearing up for their cross-country PAC Tour and Felkerino and I were trying to get in shape for our upcoming tour in Colorado.

Felkerino and I like this route. Quiet roads, plenty of scenic climbs with miles of valley riding for recovery, and ambitious mileage into the Bluegrass Valley and Virginia Highlands make for an awesome summer overnight.

This is a month where I’m sneaking in an extra photo. Some of the most invigorating riding I’ve ever done happened during our weeklong trip to Colorado in July. It was day after day of awesome and I truly felt away from my day-to-day life, immersed in Felkerino’s and my journey around the state.

We were little bike riders doing big fun things on a tandem that loves to climb mountains. Many thanks to Tim Foon Feldman and John Lee Ellis for helping to make this bike tour a reality.

Felkerino, DF, and I put on our hiking shoes for a week of exploring in Sedona. The sunny days and daily stretching of the legs felt good.

I had not visited Sedona until this year, and the contrast of red rocks against the blue sky was unlike anything I’d seen before. I see why so many people are drawn to Sedona.

September is such a beautiful time to ride and it was a unique experience to ride a brevet through Lancaster County during the beginning of the harvest.

We could not have had a better day on the bike, meandering past the tall corn and barns full of drying tobacco leaves. We were even treated to a barbecue at the finish. Many thanks to Tom R. and the Pennsylvania Randonneurs for hosting this special ride.

During the 16-day government shutdown I rode more than 500 miles, almost all of them fueled by the fury and frustration of the dysfunction of our government. In addition, I ran more than 45 miles, also fueled by the same feelings.

It was not all bad, though. Despite the signs everywhere saying that the National Mall was closed due to the shutdown, it was actually nice to bike along the Mall’s empty side streets. No parked cars. No vehicular traffic. I could get used to that.

Another month where I’m inserting an extra photo. Or two.

Felkerino and I headed north to Philadelphia to check out the Bike Expo and to see the city. Philadelphia is another place I had never visited until this year (looks like there are more firsts for me this year than I realized!). We chatted with the vendors, saw bike friends, and went coffeeneuring, too.

Speaking of coffeeneuring, the Coffeeneuring Challenge more than doubled in size with 125 official finishers this year and several honorable mentions. Thanks to everybody who made this challenge so successful.

My late-November trip to my home state of Iowa coincided with the first snowfall of the year. It was a rare treat to make fresh tracks in the white powdery stuff on my morning runs there.

Felkerino and I participated in our last organized ride of the year, the WABA Cider Ride. This was WABA’s first year holding the event. The ride start was too close to home to pass up, the start time was 8:30 (perfect!), and the lure of hot cider was strong.

The route took us through Bowie, Maryland. Guess what? I had not ridden to Bowie before. Another first! I’d also never ridden by Fed Ex Field, and I’m okay if I don’t go by it again. Football stadiums are not my thing.

This photo is of riders hanging out at the end of the Cider Ride. Everyone looks so relaxed and content in the cozy post-ride space, just the way you want to feel at the end of a December ride.

Finally, because running was so enjoyable for me in 2013 I planned a celebratory solo New Year’s Eve run. I paused en route to take a few self-timer photos. I ran along the National Mall, a place where my feet have put in many good miles– alone and with running friends– this year.

Thanks to everybody who rode and ran with me this year. And thanks to all of you who read this blog and to those who participated in the Chasing Mailboxes challenges.

Seeing the last 12 months wrapped up in these year-end posts has given me even more appreciation for what a good year 2013 has been. I’m looking forward to what 2014 has in store. Happy New Year, all!