At the beginning of this year I committed to having a different kind of year than I had in 2012. At the end of last year I had started to feel burned out, as though I had been doing the same thing over and over and not enjoying it.

Felkerino and I agreed to back off on the longer brevets this year. Instead we focused on a summer bike tour in the mountains of Colorado and on recharging our batteries so that we could resume a more ambitious randonneuring and riding schedule in 2014.

I looked through my journal this week to see what goals I had written down for 2013, as that is a practice I’ve adopted over the years. I’ve found that goal-setting helps me plan and concentrate my energies. I also like to look back and see which goals I met and reflect on reasons why others may have gone by the wayside.

I wrote down no goals for 2013. None. That disconcerted me. What? I forgot to write down goals? How can I know how well I did this year without goals? 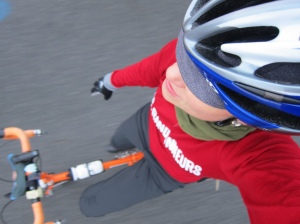 Somehow I still managed to accomplish things despite not writing down any specific targets. Most importantly I ended the year feeling as though I had a steady output of energy, rather than the highs and lows of previous years.

At first, I felt a little untethered by not doing a complete Super Randonneur series, since that is what Felkerino and I typically have done in the spring. But it was important for us to rekindle our excitement for the brevets and the way we did that was by breaking away from our brevet routine for the year. How can I miss you if you never leave and all that.

I’ve laid out this 2013 wrap-up in two parts. Today’s post is about the miles and event highlights. 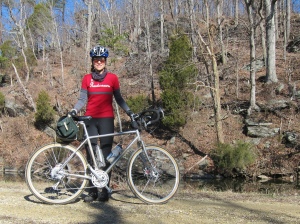 Given that Felkerino and I did not anticipate completing a full Super Randonneur series and had not planned a 1000K or 1200K (which we’ve done for the past three years), I figured that our riding miles would decrease. They did. In 2011 and 2012, I rode more than 8,000 miles each year.

As of December 30, 2013, my yearly total stands at 7,135. I’m happy with that total. I rode when I felt like it and, while my fitness level is not such that I’d want to tackle a 300K next week, I think I maintained a solid base to carry into next year’s adventures.

Felkerino and I attempted our first ultra-cross race on tandem this year, the Hilly Billy Roubaix outside of Morgantown, West Virginia. What a thrill, and we even set a tandem course record!

We also put our new Co-Motion Java tandem through its paces on our weeklong Colorado bike tour. It was one of the most eye-poppingly beautiful and challenging tours we have done.

That tour made me fall in love with the fit and feel of our Co-Motion Java and I am eager to return for more riding in Colorado. 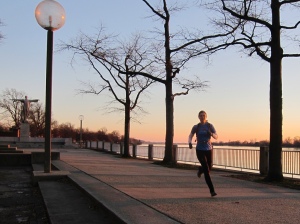 Working so close to the National Mall and craving a change from the cycling routine, I really enjoyed lacing up my running shoes.

I am pleasantly surprised to see how much I ran in 2013. As I’ve written before, I see myself more as a bicyclist than a runner, but I really do like going out for a run! It’s so minimalist compared to cycling and I also find it more meditative. It’s a changed perspective from riding a bike and uses different muscles, too.

This year I also fell in with a great group of runners from my office. We encourage each other to get outside, free our minds from our computers, and share in a midday run. They got me outside on days when I felt like staying put, and I consider myself truly fortunate to have these running buddies.

Up Next:  The year in review in photos. Are these year-end posts cheesy? Yes! Do I still like doing them? Yes!