A Marathon DNF: the Mustard’s Off the Hot Dog

After wrapping up the Marine Corps Marathon, I was riding a big post-marathon endorphin high. I’d run three marathons in six weeks, and my body had held up remarkably well. I felt a little tired, but had no notable lingering aches or pains.

Whenever I experience the post-marathon high, I tell myself to not make any decisions about the next run until after a week has passed. It’s too easy to let endorphins carry me into the next event, without giving more pragmatic thought to whether another event makes sense.

Unfortunately, I ignored my good advice because the recent marathons had gone so well. And because I was greedy.

For the first time in my life, I had completed four marathons in a year and I wanted one more. “Four is a good number,” I thought. “But five is better! Why have four when you can have five?” 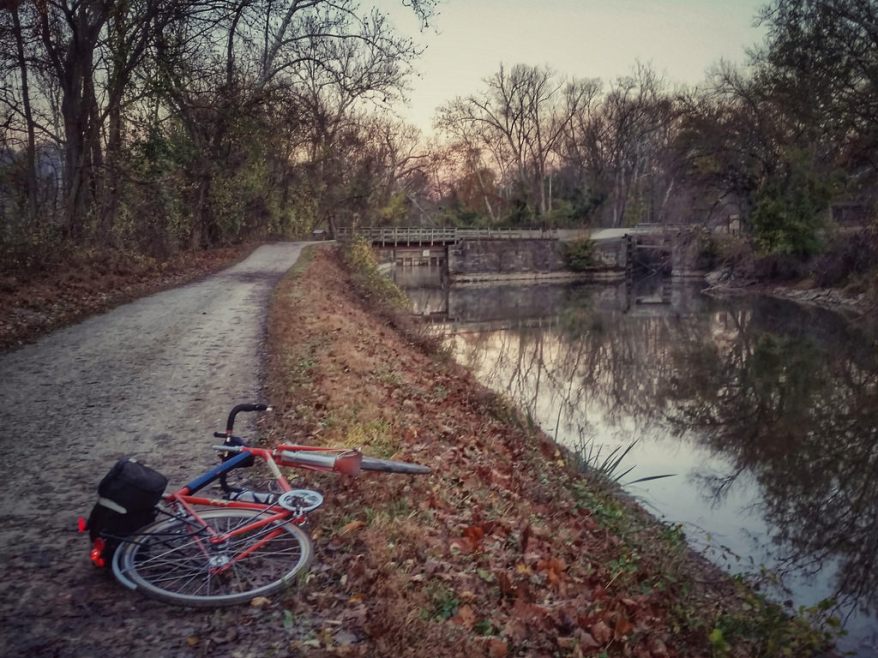 I saw an opportunity to complete five marathons in 2015 and registered last-minute for the Potomac River Marathon on November 15, which is a double out-and-back course that starts by Carderock Recreation Area on the C&O Canal. This marathon would also give me another opportunity to ride my bike to the start, a 14-mile one-way ride.

I felt fatigued in the weeks leading up to the event– there were three weeks in between the Marine Corps Marathon and this one– but I told myself I was really feeling nervous, and nothing more.

The morning of the run, I woke up, threw on my marathon clothes, threw on my cycling clothes over those (I looked fairly insane with this ready-for-anything combination), and packed my running shoes on my Quickbeam.

I rode off into the last of the darkness. About 20 minutes into my ride, the sun rose. As pastels began to illuminate the sky, I gave thanks for my run. I was one of a few lucky early birds out and about in the quiet city. 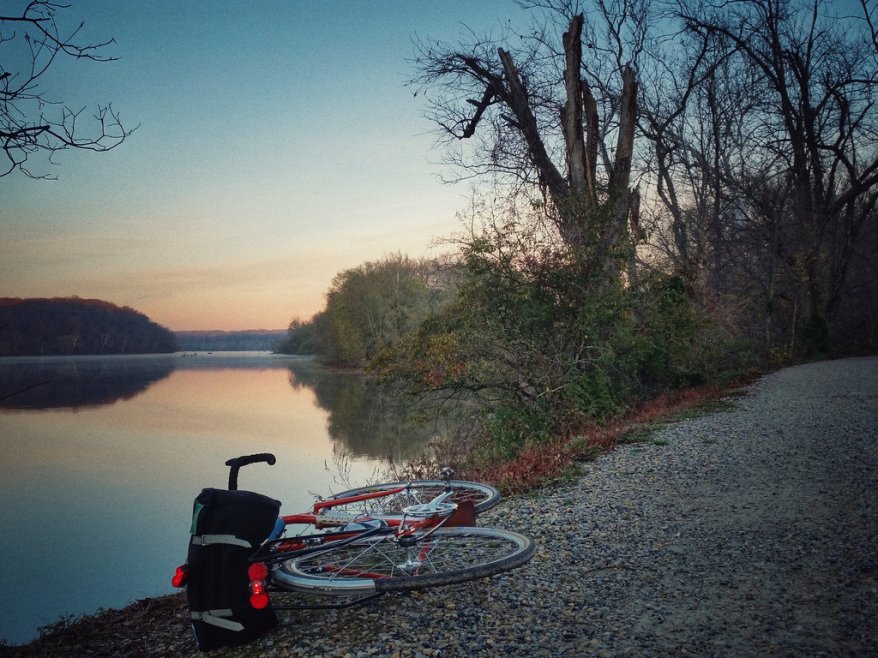 C&O Sunrise Ride on the Quickbeam

En route to the start, I paused a couple of times to take photos. I had told myself to be all business, make no stops, and ride directly to the start, but as you can see, I’m not very good at following my own advice.

Parts near the river had frozen overnight. This was beautiful in its novelty, as was the light fog hovering over the canal water itself. Fortunately, I had left early enough to give myself a few sunrise photo opportunities.

I hastily removed my extra cycling layers, laced up my running shoes, and made my way to the start, where a small group had congregated. As is customary for these events, no one could hear the pre-run announcements. Someone played a nice rendition of the Star Spangled Banner on a clarinet, and after a couple more unintelligible announcements we were off.

I’ve had such a wonderful fall along the C&O. I watched the colors fill the trees along the towpath. I rode my bike over the autumn leaves soon after they fell and listened to them crunch and whir under my wheels. And this weekend I was back to see the final leafy holdouts while I peered through the baring branches out at the Potomac.

At the halfway point. Feeling A-OK!

After about three miles of gradual thawing of my frozen feet, my run was progressing fairly well. The day was spectacular, with temperatures quickly rising to where I didn’t need my long-sleeve base layer. It felt great to run so lightly in November.

The trail felt good, and I finished the first half in what I thought was pretty solid shape. I briefly contemplated quitting then, but the ideal conditions and my greed for glory pressed me onward.

At mile 16.5 or so, pain sliced through the back of my right calf. “Bad pain,” I said to myself. This was not a cramp I could hope to walk off, but something that had pulled in my leg.

It wasn’t going away, and would only worsen if I continued. I didn’t push forward for very long, quickly determined I should call it a day, and walked-limped the 3.5 miles back to the starting area.

Many thoughts swept in and out of my head as I considered my circumstances. One, this was really no big deal in the grand scheme of things. Second, why was Green Day’s “Boulevard of Broken Dreams” playing on my rotation at exactly that moment?

I can’t stand DNFs (Did Not Finish) so not completing the run churned up a fair amount of cognitive dissonance. I believe that I went into this race, maybe not from a place of strength, but with the intention of completing it. And my conditioning was fairly solid, although as I said, I think the sequence of the previous three marathons had physically worn me down.

I could have pressed on, but walking the last 9 miles held no appeal. Finishing just to have an official time and risk further injury didn’t make a lot of sense, and wasn’t the experience I wanted.

I wanted the finish, but I didn’t want it through a long painful hobble to the end, especially when I’ve been so looking forward to getting back on the tandem for some real miles with Felkerino, AND when I needed to ride my bike home from the day’s run.

I’ve frequently seen a sign held up at marathons that reads some version of “Someday you will not be able to do a marathon. Today is not that day.” I’ve starkly sensed the marching of time this year, and that has contributed to exacerbated impatience.

I know the aging process will likely limit me from being able to do certain things so it’s made me want to seize opportunities. I worry time is racing away from me. I feel a need to try harder when I can. Maybe that’s not a bad thing, but in this case I definitely found myself pushing against my limits.

Riding into the morning light before the run start.

I limped to the finish line, people cheered me, and I told everyone that I had had to drop. I may have been a little melodramatic, but I did not want anyone to think that I had achieved something I hadn’t earned. Someone said that just getting out to run was more than she would have done, which soothed my ego somewhat.

Felkerino came to meet me and we had a little picnic before I switched back into my cycling clothes to ride the 14 miles back home. Since the path was flat, my calf gave me little trouble. I let my quads do the work to get me home.

We talked about my failed attempt at this marathon, and agreed that I had been smart to stop. My calf still burns a bit as I write this, and I know quitting was the right decision in order to promote healing and minimize any inactivity because of injury.

The ride home. Hard to be too upset, but wish the mustard hadn’t come off the hot dog.

Felkerino said that this marathon was like eating a full meal, but still wanting dessert. He said that I wanted to eat a giant sundae, I had eaten it, and it had made me sick.

We laughed. It was a great comparison, and made me think of the great Chick Hearn expression, “The mustard’s off the hot dog.” That was me. I should  have been content with four.

Many people sent encouraging words after they heard I hadn’t finished this run (thanks to all!), and my BikeDC friend Rootchopper, a former runner himself, had this thought: “A busted race is a sign that you are not afraid to push your limits.”

So maybe I should have stuck to four marathons for the year, but maybe it was okay to try, too. And while I may dislike ending with a DNF,  it gives me food for thought that will help me plan the months ahead. In the end, it was still a great day to be outside and to be a runner and a cyclist, trying my hardest to reach a new goal.